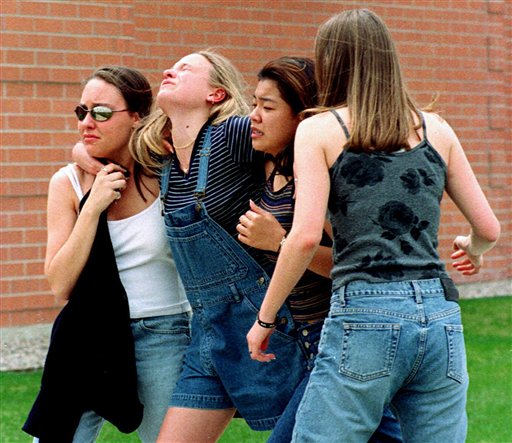 The Ninth Circuit Court of Appeals was influenced by the mass shooting at Columbine High School in Colorado when it decided that school officials did not violate an Oregon student's First Amendment rights when they expelled him for submitting a violent-themed poem to his English teacher in a 2001 case. In this photo, unidentified young women heading to a library near Columbine High School where students and faculty members were evacuated after two gunmen went on a shooting rampage in the school in 1999. (AP Photo/Kevin Higley, used with permission from the Associated Press)

In Lavine v. Blaine School District, 257 F.3d 981 (9th Cir. 2001), the Ninth Circuit Court of Appeals ruled that school officials did not violate a student’s First Amendment right of free expression when they temporarily expelled him for submitting a violent-themed poem to his English teacher.

The case involved high school student James Lavine from Blaine School District in Washington state, who wrote a poem about a school shooter after the shooting at Thurston High School in Springfield, Oregon. Lavine’s poem, entitled “Last Words,” examines the mindset of a student who kills his classmates and then expresses remorse.

Lavine took the poem to school in October 1998 to show his English teacher, who had encouraged her students to write creatively on their own time. After Lavine’s teacher expressed concern that the student might harm himself or be crying out for help, school officials decided to “emergency expel” James for fear that he might cause harm to himself or other students at school.

In 1999 a federal district court ruled in favor of the Lavines on both counts. The district court determined that the school officials overreacted and that they should not maintain any negative documentation about James as a result of the incident.

A three-judge panel of the Ninth Circuit reversed in 2001, reasoning that the case must be understood against the backdrop of Columbine and other school shootings.

The appeals court applied the Supreme Court’s test from Tinker v. Des Moines Independent Community School District (1969), which asks whether school officials could reasonably forecast that the student expression might cause a substantial disruption of school activities, against the “totality” of the surrounding facts, which included James’s past disciplinary record, a domestic dispute he had with his father, and the violent content of the poem.

The Court concluded that “Taken together and given the backdrop of actual school shootings ... these circumstances were sufficient to have led school authorities reasonably to forecast substantial disruption of or material interference with school activities—specifically, that James was intending to inflict injury upon himself or others.”

The appeals court did uphold the district court’s injunction against maintaining negative documentation about James as a result of the incident. “The school need not permanently blemish James’s record and harm his ability to secure future employment,” the court wrote.

Lavines were denied review of decision; some judges were critical

The Lavines sought en banc review, but the Ninth Circuit denied it in Lavine v. Blaine School District (9th Cir. 2002). Three judges dissented from the denial of review, including Judge Andrew Kleinfeld, who feared that the decision would force students to “hide their art work.”

School officials may now subordinate students’ freedom of expression to a policy of making high schools cozy places, like daycare centers, where no one may be made uncomfortable by the knowledge that others have dark thoughts, and all the art is of hearts and smiley faces. The court has adopted a new doctrine in First Amendment law, that high school students may be punished for non-threatening speech that administrators believe may indicate that the speaker is emotionally disturbed and therefore dangerous.

The Lavines petitioned for Supreme Court review, but it denied cert on June 28, 2002.