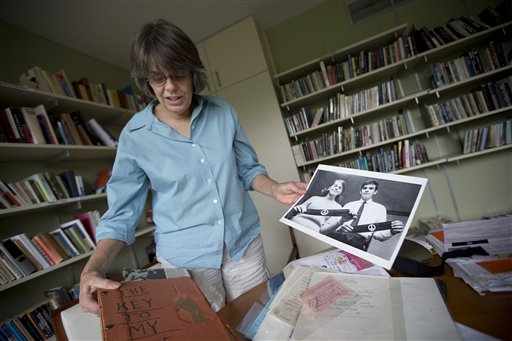 In this photo taken Tuesday, Aug. 27, 2013, Mary Beth Tinker, 61, holds up an old photograph of herself with her brother during an interview with the Associated Press in Washington. Tinker was just 13 when she spoke out against the Vietnam War by wearing a black armband to her Iowa school in 1965. When the school suspended her, she took her free speech case all the way to the U.S. Supreme Court and won. Her message: Students should take action on issues important to them. "It's better for our whole society when kids have a voice," she says. (AP Photo/Manuel Balce Ceneta.)

Students suspended for protesting the Vietnam War through black armbands

In December 1965, a group of parents and students in Des Moines, Iowa, gathered to discuss ways to protest the Vietnam War and proclaim their support for a truce. One of the actions selected was for students to wear black armbands. School officials learned of the plan and quickly passed a policy prohibiting armbands. They continued, however, to allow students to wear political campaign buttons and Iron Crosses. Several students—including Christopher Eckhardt, John Tinker, and Mary Beth Tinker—wore the armbands to school and faced suspension. The armbands caused no real disruption of school activities.

The students’ families challenged the suspensions on First Amendment grounds in federal court. A federal district court judge dismissed the lawsuit in 1966, finding that the school rule was a reasonable way to prevent student disturbances. The Eighth Circuit Court of Appeals divided evenly, which allowed the lower court decision to stand. The students then appealed to the Supreme Court and won in a 7-2 decision.

Writing for the majority, Justice Abe Fortas stated that it “can hardly be argued that either students or teachers shed their constitutional rights to freedom of speech or expression at the schoolhouse gate.” He focused on the fact that school officials could point to no evidence that the armbands would disrupt school activities. He noted that an “official memorandum prepared after the suspension that listed the reasons for the ban on wearing the armbands made no reference to the anticipation of such disruption.”

Fortas also noted that school officials had selectively chosen only one symbol to ban. He reasoned that this indicated that school officials sought to single out “the prohibition of expression of one particular opinion.” Citing Burnside v. Byars (5th Cir. 1966), Fortas articulated what has come to be known as the Tinker standard—school officials cannot censor student expression unless they can reasonably predict that the expression will create a substantial disruption or material interference in school activities or invade the rights of others.

Justices Hugo L. Black and John Marshall Harlan II wrote separate dissents. Black accused the majority of contributing to the “beginning of a new revolutionary era of permissiveness in this country” and “surrender[ing] control of the American public school system to public school students.” Harlan asserted that courts should defer to the reasonable judgment of school officials unless students carry their burden of “showing that a particular school measure was motivated by other than legitimate school concerns.” He determined that the students in Tinker had failed to meet this burden.

Court made exceptions to Tinker