By Richard Parker
Related cases in Travel, Denial of Passports 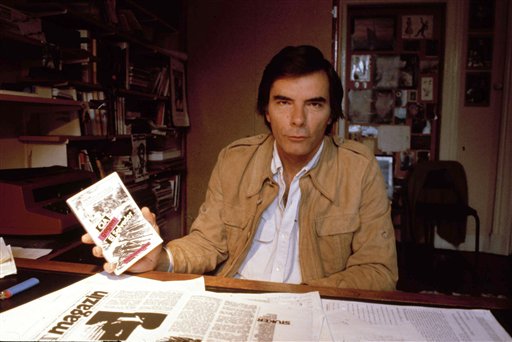 Philip Agee, a former CIA agent who became an outspoken critic of U.S foreign policy, holds one of his book in his Hamburg, Germany, home on June 30, 1981. Haig's passport revocation raised and answered First Amendment questions regarding the right to travel in order to prevent speech deemed harmful to national security. (AP Photo/Thomas Grimm, used with permission from the Associated Press)

In Haig v. Agee, 453 U.S. 280 (1981), the Supreme Court ruled that the executive branch’s power to revoke passports in matters of national security is a matter of discretionary authority to which the courts should defer, even in cases where individuals might be claiming that their right to travel was tied to their exercise of First Amendment freedoms.

The case raises and answers questions regarding revocation of the right to travel in order to prevent speech deemed harmful to national security. The Court’s ruling is seen by some as conflating issues of speech and conduct under the guise of protecting vital national interests.

Philip Agee (1939-2008), an American citizen and former CIA agent, vowed “to expose CIA officers and agents and to take the measures necessary to drive them out of the countries where they are operating.” He traveled to various countries, collected information from former contacts, and subsequently disclosed the identities of agents and front organizations, flouting secrecy agreements he had signed as a CIA employee. In 1979 the secretary of state revoked Agee’s passport because his “activities abroad are causing or likely to cause serious damage to the national security or the foreign policy” of the United States.

Agee filed suit claiming that the secretary of state had exceeded his authority under the Passport Act of 1926 when identifying grounds for passport revocation, that Congress had not authorized the regulation, and that the regulation was overbroad. He also claimed that the revocation of his passport violated his Fifth Amendment right to travel and his First Amendment right to criticize government policies.

Both the district court and the court of appeals ruled in Agee’s favor. Neither thought that law granted the secretary of state the discretion that he had exercised.

Court's upheld revocation based on compelling interest of national security

Chief Justice Warren E. Burger wrote the 7-2 majority opinion for the Supreme Court overturning the lower courts’ rulings. The majority held that the executive branch has the discretionary authority to revoke passports and that the courts, like Congress, should defer to the executive.

Justice William J. Brennan Jr. dissented because of concerns that the unrestrained exercise of discretionary authority could punish citizens who merely criticized U.S. foreign policy. Burger replied: “The mere fact that Agee also engaged in criticism of the government does not render his conduct beyond the reach of the law.”

Burger further argued that “no governmental interest is more compelling than the security of the nation.” In support of this claim, he cited language in Snepp v. United States (1980), highlighting the government’s “compelling interest in protecting both the secrecy of information important to our national security and the appearance of confidentiality so essential to the effective operation of our foreign intelligence service.”