By Judith Haydel
Related cases in Trespassing and Sit-ins, Civil Rights Movement and the First Amendment 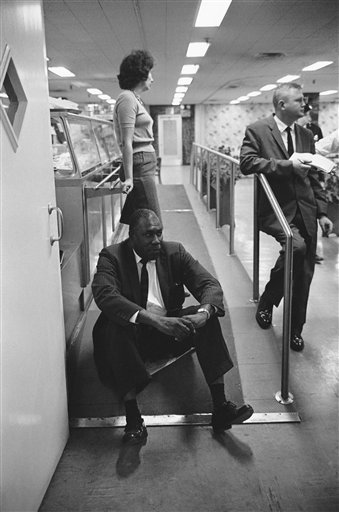 The Supreme Court ruled in Brown v. Louisiana, 383 U.S. 131 (1966) that a silent sit-in demonstration protesting segregation in a public library was protected symbolic speech under the First and 14th Amendments. In this photo, a protester, part of a group led by Rev. Avery Alexander, stages a sit in at the New Orleans City Hall cafeteria at the segregated facility, Oct. 31, 1963. Protesters were arrested when they refused to move. (AP Photo/Jim Bourdier, used with permission from the Associated Press)

The Supreme Court ruled in Brown v. Louisiana, 383 U.S. 131 (1966) that a silent sit-in demonstration protesting segregation in a public library was protected symbolic speech under the First and 14th Amendments.

In early March 1964 in Clinton, Louisiana, five black men entered the Audubon Regional Library, a member of the three-parish library system. A library staff member asked if she could help the five men. Henry Brown, reportedly a member of the Congress of Racial Equality (CORE), requested a book. The librarian told him that the library did not have a copy, but that she could order one and notify Brown when it arrived.

The book would be mailed to him, and he could mail it back or return it to the bookmobile for blacks. After completing this transaction, Brown sat in the only chair available to patrons, and the other four men stood around him. They said nothing. Another librarian and the sheriff asked them to leave, but they refused. The sheriff then arrested the three men for violating Louisiana’s breach-of-the-peace statute. They were given a bench trial and convicted. The Louisiana Supreme Court denied their appeal, so the men petitioned the U.S. Supreme Court.

The justices ruled 5-4 that the demonstration did not violate Louisiana’s breach-of-the-peace law, but they did not agree on a majority opinion.

In an opinion joined by Chief Justice Earl Warren and Justice William O. Douglas, Justice Abe Fortas held that the right of peaceful protest is not confined to speech, but also includes such expression as silent protest.

Court looked at other sit-in cases in Louisiana