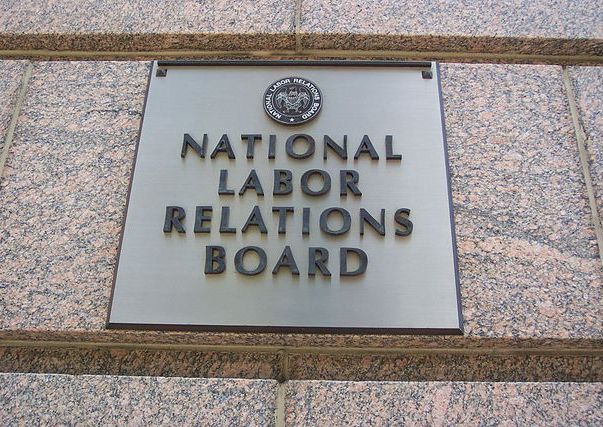 American Communications Association v. Douds (1950) upheld a law that required labor union leaders to sign a loyalty oath in order for unions to utilize the benefits and protections of the National Labor Relations Board (NLRB). Some had challenged the law on First Amendment grounds. (Image via Wikimedia Commons, CC BY-SA 3.0)

In American Communications Association v. Douds, 339 U.S.382 (1950) the Supreme Court upheld the constitutionality of section 9(h) of the Labor Management Relations Act of 1947.

Law required labor officers to swear they were not Communists

The provision required that for labor unions to utilize the benefits and protections of the National Labor Relations Board (NLRB), they must file affidavits “by each officer of such labor organization and the officers of any national or international labor organization of which it is an affiliate … [declaring] that he is not a member of the Communist party or affiliated with such party, and that he does not believe in, and is not a member of or supports any organization that believes in or teaches the overthrow of the United States Government by force or by illegal or unconstitutional methods.”

Congress created the NLRB to encourage and protect the flow of interstate commerce and discourage and guard against “institutional impediments,” such as strikes and other forms of industrial unrest.

It identified “political strikes” as an impediment and, according to testimony presented before Congress, as resulting from “Communist labor union leaders subordinating legitimate trade union objectives to obstructive strikes when dictated by Party leaders, often in support of the policies of a foreign government.”

Petitioners countered that section 9(h), known as the “non-Communist affidavit provision,” effectively prohibited union leadership by those who could not sign the oath and that such a law violated fundamental First Amendment rights.

“The difficult question that emerges,” wrote Chief Justice Frederick M. Vinson in his opinion for the Court, is “whether, consistently with the First Amendment, Congress, by statute, may . . . deny positions of leadership to certain persons who are identified by particular beliefs and political affiliations.”

Court said law did not violate the First Amendment

The Court answered this question in the affirmative. Given Congress’s constitutional power to regulate commerce among the states, including preventing actions that might burden or interrupt the free flow of commerce, Congress could rationally find that the Communist Party and individuals who espoused revolutionary beliefs represented legitimate threats to commerce.

The Court admitted that in drawing lines on the basis of “beliefs and political affiliations … Congress has undeniably discouraged the lawful exercise of political freedoms.” It went on to note that “[w]hen particular conduct is regulated in the interest of public order, and the regulation results in an … abridgment of speech, the duty of the courts is to determine which of these two conflicting interests demands the greater protection under the particular circumstances.”

The Court then concluded that under the totality of the circumstances,“ section 9(h) of the National Labor Relations Act … does not unduly infringe freedoms protected by the First Amendment.”

This article was originally published in 2009. Carrie Archie Russell is the Assistant Dean of Undergraduate Education in Vanderbilt University's College of Arts & Sciences. She is also the Director of Pre-Law Advising in the Department of Political Science. Her research interests include public law, judicial politics and race and public policy. Before earning her PhD from Vanderbilt, Carrie worked as a Judicial Clerk for Davidson County Tennessee’s Twentieth Judicial District.