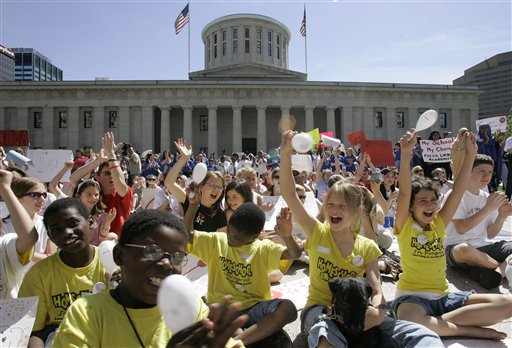 In 2002, the United States Supreme Court in Zelman v. Simmons-Harris upheld Ohio's law allowing state money for school vouchers that parents could use to pay for private schools, including private religious schools. School vouchers, and other "school choice" laws that divert money to private institutions, remain controversial, and in this 2007 photo, people brought children to help rally against the Ohio governor's proposal to eliminate the voucher program from the state's budget. (AP Photo by Kiichiro Sato, used with permission from the Associated Press)

In the early 1990s, Cleveland public schools were in disarray; critics argued that they no longer were able to achieve the primary goal of educating students.

In response, Ohio created a program that provided parents of students in low performing schools with a voucher to send their child to the school of their choice. Many of the families who participated used these vouchers to enroll their children in private religious schools.

A group of Ohio taxpayers brought a suit against such aid on establishment clause grounds, claiming the program had the effect of providing taxpayer money to religious institutions.

Ohio argued that this situation differed from previous establishment clause cases because the money was not awarded directly to religious schools, but instead went to private individuals who then chose to use the money at a religious institution.

The state also pointed to the many religious neutral criteria that were used to award the vouchers to the families.

In 1999 a federal district court in Ohio found in favor of the taxpayer group and permanently enjoined the government-financed voucher program.

On appeal, the Sixth Circuit Court of Appeals upheld the lower court ruling.

The Supreme Court justices sharply split between these two positions. The five in the majority, who overruled the lower courts and sustained the program over establishment clause concerns, pointed to the neutrality of the program and parental choice, as well as civil rights concerns.

For the majority, Chief Justice William H. Rehnquist wrote: “The Ohio program is entirely neutral with respect to religion. It provides benefits directly to a wide spectrum of individuals, defined only by financial need and residence in a particular school district. It permits such individuals to exercise genuine choice among options public and private, secular and religious. The program is therefore a program of true private choice.”

The dissenters emphasized that under the traditional criteria of Everson v. Board of Education (1947), public money was not to go to religious organizations. They questioned the appearance of neutrality by pointing out that 96 percent of those awarded vouchers used them at religious schools.

The political effect of this ruling has been to redirect the fight over education vouchers back to the states, where state legislatures and interest groups work through the feasibility and usefulness of such programs, as long as they do not directly aid religious schools. Many states, particularly in the West, have state constitutions that may prohibit such programs, despite the Court’s holding in Zelman that these vouchers are permissible under the U.S. Constitution.

This article was originally published in 2009. John Ferguson is a senior lecturer of Business Law and Ethics at Utah State University. Prior to his academic career Ferguson spent eight years as the First Amendment Education Coordinator at the Freedom Forum First Amendment Center at Vanderbilt University. While there he traveled across the country working with schools and communities to resolve First Amendment related controversies and wrote extensively on First Amendment matters.