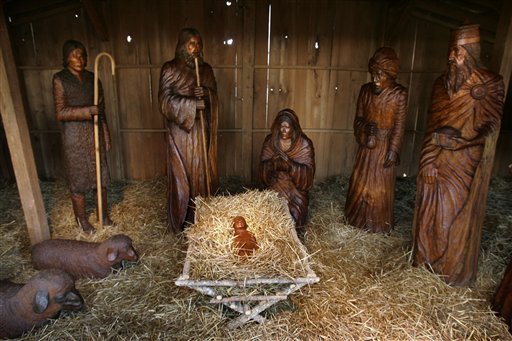 Lynch v. Donnelly (1984) upheld a religious display on government property in Rhode Island against a challenge that displaying the Christian symbols of the creche, or manger scene, was a violation of the establishment clause of the First Amendment. This 2007 photo is of a Nativity scene on the Arkansas state Capitol grounds that remained on display despite objections that the arrangement violated the separation of church and state. (AP Photo/Danny Johnston, used with permission from the Associated Press)

The Supreme Court decision Lynch v. Donnelly, 465 U.S. 668 (1984), upheld the constitutionality of a seasonal holiday display that included a manger scene, or creche, on government property, finding that it was not in violation of the establishment clause of the First Amendment.

The city of Pawtucket, Rhode Island, co-sponsored with local merchants a Christmas display during the holiday season. The display was erected in a public park and included, among other items, “a Santa Claus House, reindeer pulling Santa’s sleigh . . . cutout figures representing such characters as a clown, an elephant, and a teddy bear . . . and the creche.”

Residents of the city and the local affiliate of the American Civil Liberties Union filed suit in federal court, challenging the inclusion of the creche in the display. The district court ruled for the plaintiffs, and a divided First Circuit court affirmed. Pawtucket then successfully appealed for certiorari.

Supreme Court upheld display, said cases have to be decided in context

Writing for the Court, Chief Justice Warren E. Burger cited Christmas and Thanksgiving as national holidays and noted that “Government has long recognized — indeed it has subsidized — holidays with religious significance.” That tradition of recognizing the country’s religious roots was distinguished from the First Amendment’s proscription of endorsing and establishing a religion.

Noting the difficulty of establishment clause jurisprudence and implicitly questioning the usefulness of the three-part Lemon test, which the Court often applied to establishment clause cases, the chief justice argued that, “In each case, the inquiry calls for line-drawing; no fixed per se rule can be framed.” Such an approach ensures the Court’s continued role in adjudicating church-state controversies.

As a result, Burger’s opinion advocated viewing establishment clause cases with a contextual approach, focusing in this case on the context of the holiday season.

Finding error with the district court’s primary concern with the creche as a per se religious symbol and not as a component within a larger display, the Court recast the argument in this way: “The narrow question is whether there is a secular purpose for Pawtucket’s display of the creche.” Burger found the secular purpose within tradition and context, likening the display to the paid chaplaincies of the U.S. Congress, which the Court upheld in Marsh v. Chambers (1983).

Justice Sandra Day O’Connor filed a separate concurrence advocating an endorsement test, although she also concluded that the inclusion of a creche did not communicate a government endorsement of Christianity. Through the years, the Court has used O’Connor’s endorsement analysis in other cases.

For Brennan, the sectarian nature of the creche could not be denied, and the government maintenance and ownership of the display could not be overlooked. Brennan wrote that the majority’s contextual analysis was an attempt to “explain away the clear religious importance of the creche.”

This article was originally published in 2009. Geoffrey McGovern is a political and social scientist at the RAND Corporation and an instructor in the Institute for Politics and Strategy at Carnegie Mellon University.