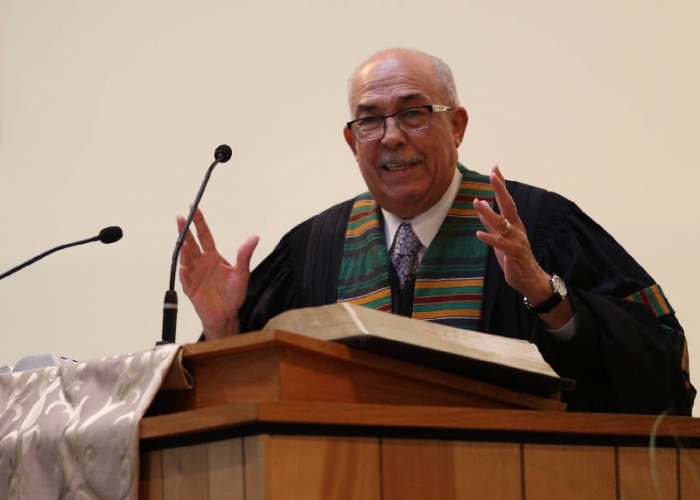 Paul A. McDaniel, a Baptist minister in Chattanooga, won a U.S. Supreme Court case that overturned a state law prohibiting ministers from holding elected office. The victory allowed him to serve as a delegate in the State Constitutional Convention that established the new form of county government. (Photo by Erin O. Smith / Reprinted with permission from Chattanooga Times Free Press)

Selma Cash Paty, a candidate for delegate to a constitutional convention in Tennessee, attempted to invoke a state constitutional provision and a state statute that barred members of the clergy from serving as delegates; her opponent, Paul A. McDaniel, was a Baptist minister.

Tennessee restrictions on office-holding by members of the clergy dated to its original constitution of 1796, which was in turn based on English precedents. John Locke and Thomas Jefferson (who later changed his mind) had both advocated such restrictions, although James Madison and John Witherspoon (the only clergyman to sign the Declaration of Independence) had opposed them. Eleven of the 13 states originally had such prohibitions, but by 1978 Tennessee remained the only state with such prohibitions in effect.

Chief Justice Warren E. Burger reviewed this history in writing the Court’s plurality decision. He argued that “the right to the free exercise of religion unquestionably encompasses the right to preach, proselyte, and perform other similar religious functions” and that Tennessee had encroached on this right, contrary to the precedent in Sherbert v. Verner (1963), by conditioning “the availability of benefits” on his willingness “to violate a cardinal principle of [his] religious faith.” Burger cited the decision in Torcaso v. Watkins (1961) prohibiting test oaths but did not think it governed because McDaniel was not being excluded because of his “belief” but because of his “conduct and activity.”

Burger thought that only the interests of highest order could outweigh free exercise claims and that Tennessee had failed to show that such a restriction was necessary to prevent the establishment of religion. Burger observed that “many clergymen vigorously opposed any established church.”

Concurring justices thought the restriction was close to a religious test

Justice William J. Brennan Jr. wrote a concurring opinion, joined by Justice Thurgood Marshall, arguing, “One’s religious belief surely does not cease to enjoy the protection of the First Amendment when held with such depth of sincerity as to impel one to join the ministry.” Brennan thought that Tennessee’s restriction was close to the religious test that the Court had invalidated in Torcaso. Brennan also thought the Sherbert precedent was relevant.

Brennan concluded that “government may not as a goal promote ‘safe thinking’ with respect to religion and fence out from political participation those, such as ministers, whom it regards as overinvolved in religion. Religionists no less than members of any other group enjoy the full measure of protection afforded speech, association, and political activity generally.”