By John R. Hermann
Related cases in Sabbath and Other Religious Observances, Free Exercise of Religion 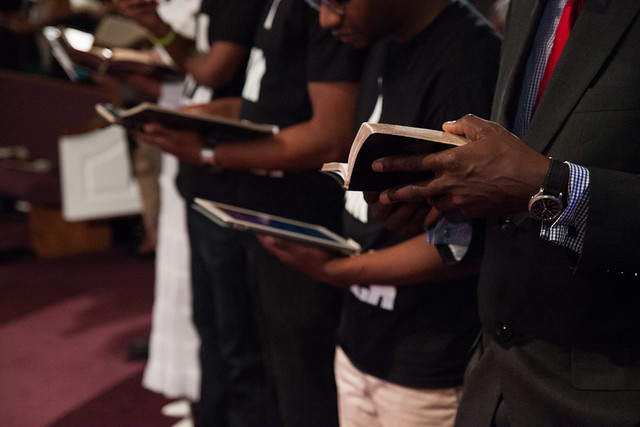 The Sabbath for Seventh-day Adventists begins on Friday evening and lasts through Saturday, and the religion prohibits work on the Sabbath. Seventh-day Adventist Adele Sherbert lost her job for refusing to work on her Sabbath, but the state of South Carolina refused her unemployment benefits because she would not accept available work from other employers who also wanted her to work on Saturday. The Supreme Court in Sherbert v. Verner invalidated the state's unemployment benefits rule as an infringement on First Amendment rights of free exercise of religion. In this photo, youth worship on Sabbath at a Seventh-day Adventist church in Dallas in 2014. (Image via Flickr, CC BY-SA 2.0)

In Sherbert v. Verner, 374 U.S. 398 (1963), the Supreme Court ruled that government can restrict the free exercise rights of individuals only if the regulations survive strict scrutiny, placing a steep burden on state laws in such cases.

Having lost in the lower courts, Sherbert appealed to the Supreme Court, contending that the law violated her free exercise of religion rights.

In the opinion for the court, Justice William J. Brennan Jr. held that the denial of unemployment benefits to Sherbert imposed a burden on her free exercise rights under the First Amendment. Establishing a strict scrutiny standard, the Court held that the state’s assertion of administrative convenience — that is, that it would be easier to deny benefits to all than to ascertain which workers’ actions were sincere — neither met a compelling governmental interest nor the least restrictive means test.

By allowing others a Sabbath on Sundays, but not Sherbert on Saturdays, the Court asserted that the state was forcing her to choose between her vocation and her religion. The justices were careful to note that by extending unemployment benefits to Sherbert, the state was not fostering a particular religion, but applying the unemployment legislation in a neutral manner in the “face of religious difference.”

The Court would later modify the strict scrutiny test established by Sherbert in Employment Division, Department of Human Resources of Oregon v. Smith (1990), where it applied the less-intrusive valid secular policy test, in which the state must show that a law alleged to affect free exercise is neutrally applied and serves a legitimate governmental interest.

In response to Smith, Congress passed the Religious Freedom Restoration Act of 1993 and the Religious Land Use and Institutionalized Persons Act of 2000 in an effort to restore the Sherbert standard.

This article was originally published in 2009. John Hermann has been a professor at Trinity University for the 25 years where he teaches on Civil Rights and Liberties. He is an expert in minority rights and the Supreme Court of the United States.