By Jesse Covington
Related cases in Sabbath and Other Religious Observances, Free Exercise of Religion 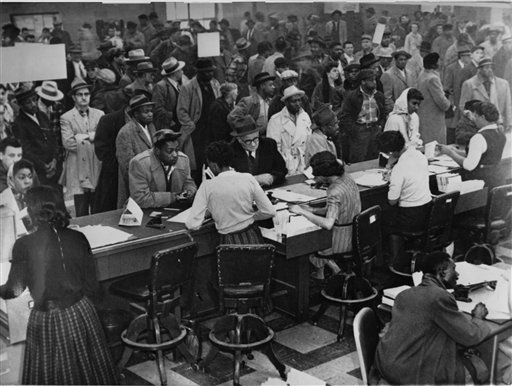 In Thomas v. Review Board of Indiana Employment Security Division, 450 U.S. 707 (1981), the Supreme Court ruled that Indiana could not deny unemployment benefits to an individual who quit his job due to a religious objection. The Court held that the free exercise clause of the First Amendment required the state to treat religiously motivated resignations as “good cause” for unemployment when evaluating benefits claims. In this March 1958 scene in a Detroit office of the Michigan Employment Security Commission laid-off factory workers lined up to apply for benefits or to pick up their cheques. (AP Photo, used with permission from the Associated Press)

In Thomas v. Review Board of Indiana Employment Security Division, 450 U.S. 707 (1981), the Supreme Court ruled that Indiana could not deny unemployment benefits to an individual who quit his job due to a religious objection. The Court held that the free exercise clause of the First Amendment required the state to treat religiously motivated resignations as “good cause” for unemployment when evaluating benefits claims.

Thomas was denied unemployment benefits for quitting for religious reasons

Eddie C. Thomas believed that his faith as a Jehovah’s Witness prevented him from personally manufacturing weapons. When he was transferred to a division of his plant that built tank turrets, Thomas resigned and was denied unemployment benefits by the state. The decision overturned that of the Indiana Supreme Court, which had found Thomas’s beliefs inconsistent and underdeveloped and concluded that his decision to quit his job was primarily personal, not motivated by his religious convictions.

Writing for an eight-justice majority, Chief Justice Warren E. Burger closely followed Sherbert v. Verner (1963) in holding that a state may not substantially infringe upon religious exercise — even indirectly — without a compelling interest promoted through the least restrictive means. Burger affirmed that in denying generally available benefits to persons who lose their jobs for religious reasons, a state exerts coercive pressure on such persons to violate their religious beliefs. Like Sherbert and Wisconsin v. Yoder (1972), Thomas treated religious motivations as constitutionally privileged over other personal preferences; Burger maintained that this does not impermissibly favor religion in violation of the establishment clause.

Justice William H. Rehnquist dissented. He argued that the Court’s interpretation of the free exercise clause was too broad, bringing it into conflict with similarly broad establishment clause precedents and leaving inadequate “flexibility” for legislation.

In contrast with the parties in Sherbert and Yoder, whose conduct was supported by established doctrines of recognized religious groups, Thomas’s objection to manufacturing weaponry was not common to Jehovah’s Witnesses. Burger stated: “It is not within the judicial function and judicial competence to inquire [who] . . . more correctly perceived the commands of their common faith.” This partially integrated into free exercise jurisprudence the more individually oriented protection of religion from the Court’s draft exemption cases of United States v. Seeger (1965) and Welsh v. United States (1970).

Thomas’s extension of protection to individual perceptions of religious duty was confirmed by the Court in Frazee v. Illinois Department of Unemployment Security (1989). The Court cited Thomas in asserting that a sincere religious belief qualifies as good cause for terminating employment even if the employee is not a member of any religious group.

The Court depended on Sherbert and Thomas in Hobbie v. Unemployment Appeals Commission of Florida (1987), in which it granted First Amendment protection to an employee who converted to a religion whose tenets were at odds with her preexisting job commitments. However, in Employment Division, Department of Human Resources of Oregon v. Smith (1990), the Court limited the extent to which religious motivations qualify as “good cause” for terminating employment. The majority in Smith ruled that an employee dismissed from his position for violating a criminal law could not claim the protection of religious motives for his conduct. Absent discrimination against religion, the justices maintained that criminal laws that incidentally burden religion do not violate the free exercise clause. Hence, the ongoing vitality of Thomas remains unclear.

This article was originally published in 2009. Jesse Covington is Professor of Political Science at Westmont College in Santa Barbara, CA. His scholarly work focuses on the interrelation of religion and government, particularly as regards the meaning of "religion" in First Amendment law, political morality and natural law, and the foundations of political liberalism. He has published on John Locke, Saint Augustine, natural law, the First Amendment, and liberal arts education, including the co-edited Natural Law and Evangelical Political Thought (Lexington, 2012).