By John R. Vile
Related cases in Sabbath and Other Religious Observances, Free Exercise of Religion 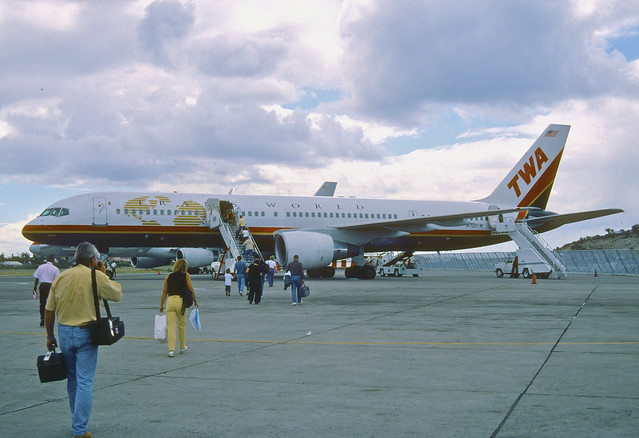 In Trans World Airlines v. Hardison, 432 U.S. 63 (1977), the Supreme Court interpreted Title VII of the Civil Rights Act of 1964 in setting limits to the accommodations that private employers were required to make on behalf of employees whose religious views limited their work on the Sabbath. (Image of a Trans World Airlines Planes in 1999 via Aero Icarus on Flickr, CC BY-SA 2.0)

In Trans World Airlines v. Hardison, 432 U.S. 63 (1977), the Supreme Court interpreted Title VII of the Civil Rights Act of 1964 in setting limits to the accommodations that private employers were required to make on behalf of employees whose religious views limited their work on the Sabbath.

Hardison was dismissed for refusing to work on his Sabbath

In this case, Trans World Airlines (TWA) had dismissed Larry Hardison, a member of the Worldwide Church of God who refused to work on Saturdays, his Sabbath. The TWA would not accommodate his requests for a Sabbath exemption after he was transferred from a building where he worked the night shift to one where he would work the day shift. With the transfer, he did not retain the same seniority with which he had previously made requests for Saturdays off.

Court said a reasonable effort was made to accommodate Hardison

Writing for the seven-justice majority, Justice Byron R. White stated that TWA had made a reasonable effort to accommodate Hardison, that it was not required to violate its seniority system to make the requested accommodation, and that alternate plans constituted an “undue hardship” on the employer that the law did not require. White observed that the Equal Employment Opportunity Commission (EEOC) guidelines requiring “reasonable” accommodations that did not present “undue” hardships did not define either term. In the case at hand, White found that TWA had met with the employee to resolve his difficulties but had refused to pay overtime to others to cover Hardison’s shift or to bypass the seniority system, which it had negotiated with the union through collective bargaining and which the union was unwilling to waive.

White commended the seniority system as “a neutral way of minimizing the number of occasions when an employee must work on a day that he would prefer to have off.” He considered it preferable to making special accommodations for individuals on the basis of their religious faith. White argued that “absent a discriminatory purpose, the operation of a seniority system cannot be an unlawful employment practice even if the system has some discriminatory consequences.” He thought that other accommodations that Hardison had requested could have resulted in “lost efficiency in other jobs or higher wages.”

Justice Thurgood Marshall authored a dissent, in which William J. Brennan Jr. concurred. Marshall argued that the decision dealt “a fatal blow to all efforts under Title VII to accommodate work requirements to religious practices.” He pointed to a long line of cases — including Wisconsin v. Yoder (1972), Sherbert v. Verner (1963), and Zorach v. Clauson (1952) — in which the Court had exempted believers from state-imposed duties and thought that it could make similar accommodations for private employees.

In contrast to White, Marshall believed that congressional actions in 1972 had attempted to provide additional religious accommodation, even when it resulted in preferential treatment for believers. Marshall did not think that TWA had made a reasonable effort to accommodate Hardison and argued that the employer had “the burden under the EEOC regulation . . . to establish that a reasonable accommodation was not possible.” He suggested that it could have opted to recruit voluntary replacements and pass the overtime cost to Hardison or that it could have transferred him back to his former building and reinstituted the seniority he had there.

The Court addressed a similar issue in Ansonia Board of Education v. Philbrook (1986).