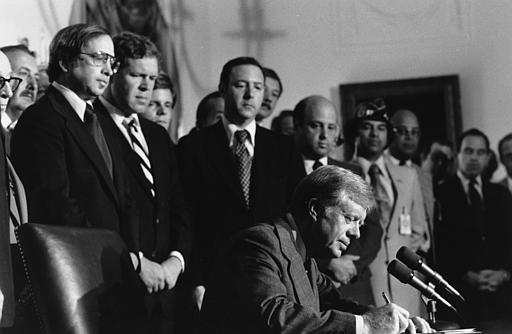 In this photo, U.S. President Jimmy Carter signs the draft registration Proclamation in the Cabinet Room of the White House in Washington, D.C., in 1980. Carter reactivated the registration process, ordering young American men to register, as a result of the Soviet armed invasion of Afghanistan. In Wayte v. United States (1985), the Supreme Court upheld the government's method of "passive prosecution" in which it only prosecuted those who reported they were not registering for the draft or who were reported by others. (AP Photo, used with permission from the Associated Press)

The Supreme Court decision in Wayte v. United States, 470 U.S. 598 (1985), dealing with selective prosecution, affirmed a decision by the Ninth Circuit Court of Appeals upholding the government’s passive enforcement policy, whereby it initially only prosecuted individuals who either reported themselves or were reported by others for not registering for selective service.

Petitioner David Alan Wayte had challenged the policy on equal protection and First Amendment grounds because it prosecuted men who were outspoken about their refusal to register.

Citing the test for regulating activities that combined speech and nonspeech activities in United States v. O’Brien (1968), Powell wrote that the government could regulate the latter in cases where such regulation “furthers an important or substantial government interest . . . unrelated to the suppression of free speech . . . [if] the incidental restriction on alleged First Amendment freedoms is no greater than is essential to the furtherance of that interest.”

Focusing on the second of these standards (the only one under dispute), Powell said that “by relying on reports of nonregistration, the Government was able to identify and prosecute violators without further delay.” He observed that “the letters written to Selective Service provided strong, perhaps conclusive evidence of the nonregistrant’s intent not to comply.” He tied such prosecutions to “general deterrence.”

Powell further observed that if the Court were to accept the First Amendment argument, individuals could gain immunity from such prosecution simply by writing letters reporting themselves.

Justice Thurgood Marshall wrote a dissent, joined by William J. Brennan Jr., in which he argued that the Court should have dismissed the suit after the government refused to provide government documents that the plaintiff had requested at the trial court. Marshall thought this evidence might have provided evidence that the government’s prosecution was specifically intended to target those who vocally criticized the selective service system.

An earlier decision in Rostker v. Goldberg (1981), largely citing the need for deference to congressional judgments relative to the military, had upheld the constitutionality of selective service registration against charges that it violated equal protection component of the Fifth Amendment by applying only to males.