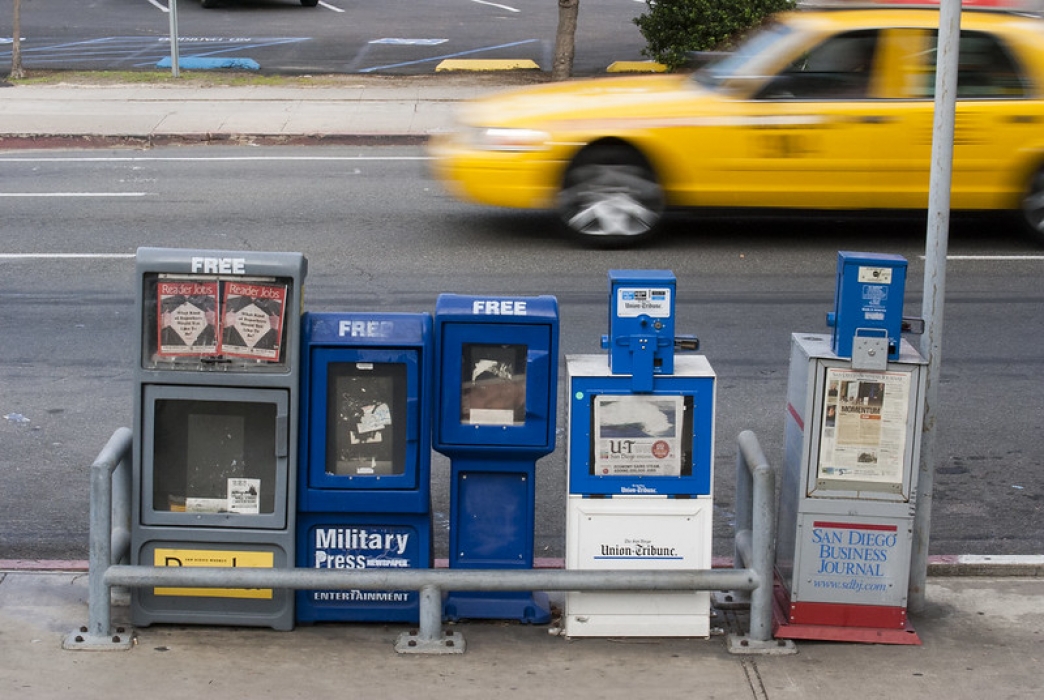 In City of Cincinnati v. Discovery Network, 507 U.S. 410 (1993), the Supreme Court held that Cincinnati’s restrictions on the distribution of commercial flyers in news racks violated the First Amendment. (Image of newsracks in San Diego, California, via Anthony Albright on Flickr, CC BY-SA 2.0)

In City of Cincinnati v. Discovery Network, 507 U.S. 410 (1993), the Supreme Court held that Cincinnati’s restrictions on the distribution of commercial flyers in news racks violated the First Amendment.

Despite the undisputed fact that flyers were commercial advertisements, the Court refused to diminish their free speech protections.

The case arose when Cincinnati decided to revoke permits allowing the Discovery Network to distribute advertisements from 38 news racks on city property because of an ordinance prohibiting the distribution of commercial handbills on public property.

The enforcement of the ordinance removed only 62 of the approximately 1,500 news racks in the city, but Cincinnati claimed that it served the significant public interests of safety and aesthetics. The far more numerous newspaper racks were not affected.

Discovery Networks and Harmon Publishing challenged the legality of the ordinance under the First Amendment. The district court and the Sixth Circuit Court of Appeals ruled against Cincinnati. The Supreme Court voted 6-3 in affirming the lower courts’ decisions.

Courts have historically applied a lower standard to commercial speech, as in Ohralik v. Ohio State Bar Association (1978), limiting direct lawyer solicitations of clients. The Court has justified this by asserting that commercial speech is more durable or that it is less central to the First Amendment than political speech. How much lower has often been far less clear.

The Court had established a test for protections granted commercial speech in Central Hudson Gas and Electric Corp. v. Public Service Commission (1980). It determined that in order for lawful commercial speech to be restricted, the government must have a substantial interest advanced by the restriction, and it must not be a more extensive restriction than necessary to meet that interest.

In Board of Trustees of State University of New York v. Fox (1989), the Court also asserted that there must be a reasonable fit between the desired ends and the means chosen.

Court said Cincinnati did not have substantial interest for the ordinance

Applying these tests in Discovery Network, the Court rejected the Cincinnati ordinance, noting that the removal of a small number of news racks did little to advance the city’s interests in safety and aesthetics. In short, it was not a reasonable fit.

In dissent, Chief Justice William H. Rehnquist concluded that even an incremental improvement of safety and aesthetics from the removal of news racks at issue should be sufficient to meet these tests.

Commercial speech remains a lower category of protected speech, but this decision indicates that governments cannot ban or restrict it without a reasonable justification.

This article was originally published in 2009. Dr. Kevin Wagner is an attorney, pollster, professor and Department Chair in Political Science at Florida Atlantic University. He writes a weekly column for Gannett newspapers titled the Civics Project, and his latest book is from Oxford University Press titled Tweeting to Power: The Social Media Revolution in American Politics. You can find his commentary on law and politics onTwitter @kevinwagnerphd.