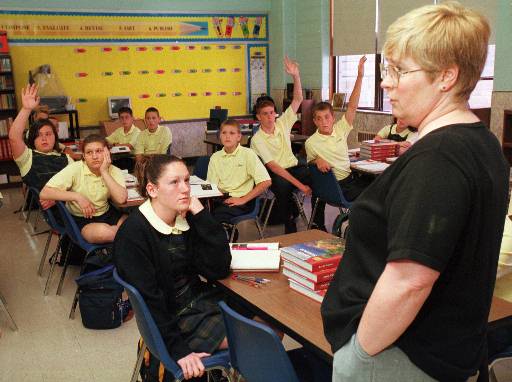 Mueller v. Allen, 463 U.S. 388 (1983), is one of the more prominent cases in which the Supreme Court upheld the validity of a law allowing tax deductions for tuition and other school expenses disproportionately benefiting parents whose children attend parochial schools. The Court found the law was not in violation of the establishment clause of the First Amendment. Mary Anne Rooney, a teacher at St. Timothy's Catholic School in Philadelphia, answers questions Wednesday, Sept. 12, 2001, asked by her eighth grade class during a discussion centered on Tuesday's terrorist attacks on the United States. Philadelphia Area parochial schools remained open Wednesday to counsel students on the effects of the attacks. (AP Photo/Mark Stehle, used with permission from the Associated Press)

Mueller v. Allen, 463 U.S. 388 (1983), is one of the more prominent cases in which the Supreme Court upheld the validity of a law allowing tax deductions for tuition and other school expenses disproportionately benefiting parents whose children attend parochial schools. The Court found the law was not in violation of the establishment clause of the First Amendment.

Mueller and other Minnesota taxpayers had challenged Allen (the commissioner of the Department of Revenue) and parents who had taken advantage of a tax deduction. The U.S. district court had issued a summary judgment on behalf of the tax deduction, which the Eighth Circuit Court of Appeals had upheld.

Justice William H. Rehnquist wrote the majority decision that upheld the tax deduction and further distinguished this decision from that of the Court’s in Committee for Public Education and Religious Liberty v. Nyquist (1973). Rehnquist applied the three-prong test the Court had developed in Lemon v. Kurtzman (1971) and decided that the state had a secular purpose in defraying the cost of educational expenses that parents incurred and continuing to keep private education viable.

Rehnquist found that deduction did not advance religion

He found a number of features that indicated that the primary effect of this case did not advance religion as it had done in previous cases. He observed that the deduction was one among many. He further observed that the deduction was not, as in Nyquist, limited to parents of children in parochial schools. He also noted that public funds “become available only as a result of numerous private choices of individual parents of school-age children.”

Responding to studies that showed that the majority of such monies would go to parents with children in parochial schools, Rehnquist argued, “We would be loath to adopt a rule grounding the constitutionality of a facially neutral law on annual reports reciting the extent to which various classes of private citizens claimed benefits under the law.”

Rehnquist did not believe the law entangled church and state

Turning to the third prong of the Lemon test, Rehnquist did not believe that the law at issue impermissibly entangled the state with religion. Although the law limited reimbursements to secular textbooks, he did not think this involved the state in a decision much different from that which it had to make in Board of Education v. Allen (1968), which also provided for the provision of secular texts.

Justice Thurgood Marshall, in a dissent joined by Justices William J. Brennan Jr., Harry A. Blackmun, and John Paul Stevens, cited the “principle of neutrality” and argued that a state was not permitted to subsidize religious education either directly or indirectly. He did not think that the primary effect of the law in aiding parochial education could be distinguished from that which the Court had identified in Nyquist.

Marshall did think it was significant that the bulk of the deductions would go to parents of parochial school children. Marshall ended by quoting the Court’s decision in Everson v. Board of Education (1947): “No tax in any amount, large or small, can be levied to support any religious activities or institutions, whatever they may be called, or whatever form they may adopt to teach or practice religion.”

This decision has subsequently provided support for school voucher programs. Chief Justice Rehnquist used Mueller as one of the primary precedents to uphold an Ohio program in Zelman v. Simmons-Harris (2002).