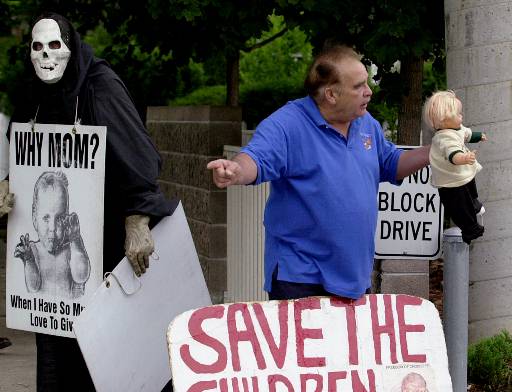 Anti-abortion protester Al Garcia, right, pleads with a patient as another protestor dressed as the Grim Reaper, left, looks on at the Rocky Mountain Planned Parenthood clinic in Denver in 2000. The U.S. Supreme Court upheld a Colorado law prohibiting protestors outside health facilities from approaching patients. (AP Photo/Ed Andrieski, used with permission from the Associated Press)

The Supreme Court in Hill v. Colorado (2000) upheld a 1993 state statute regulating protestors outside health facilities because it did not regulate speech, but rather only regulated where some speech may occur.

Leila Hill and other “sidewalk counselors” who protested abortion at clinics filed suit, challenging the statute as a violation of their First Amendment right to free speech. The trial court granted summary judgment for the state, and the Colorado Court of Appeals affirmed, ruling that the statute’s restrictions were content neutral because they targeted no specific group. The Supreme Court of Colorado declined to hear the case. The petitioners appealed to the U.S. Supreme Court, which vacated the lower judgment without opinion and remanded the case to the Colorado Court of Appeals. The court of appeals again upheld the statute, as did the Supreme Court of Colorado, and the protesters once again appealed to the U.S. Supreme Court.

In the majority opinion for the 6-3 Court, Justice John Paul Stevens asserted that the statute passed the content-neutrality test outlined in Ward v. Rock against Racism (1989) and imposed a valid time, place, and manner restriction, also as under Ward. In addition, the state had a legitimate interest in protecting the health and safety of patients, and the regulation was narrowly tailored to serve that interest. It was critical to the analysis that the statute applied to all protestors and that it did not preclude other speech by protestors, such as signs and stationary speakers.

The Court distinguished the Colorado statute from the injunction overturned in Schenck v. Pro-Choice Network of Western New York (1997). The Colorado statute only restricted a protestor from approaching an individual, whereas the injunction in Schenck required that protestors remain at least fifteen feet away from such individuals, even if it meant that the protestor must move away from the building or sidewalk.

In a concurring opinion, Justice David H. Souter reasoned that the Colorado statute was a restraint on the approach and not on the content of speech; it only affected the speaker who actively and knowingly approaches an individual for the purpose of oral protest, education, or passing out of literature. The audible and visual messages offered by such protestors were not precluded by the statute, only one manner in which those messages may be delivered.

Justice Antonin Scalia dissented, arguing that the statute was content based because it only limited one who wished to approach another for the purpose of educating, counseling, or protesting. All other approaches were acceptable under the statute. For content based legislation, Scalia pointed out that the Court must apply strict scrutiny and that the statute failed that level of scrutiny. The statute, he said, was not narrowly tailored to serve a compelling state interest because it restricted more speech than necessary. In a separate dissent, Justice Anthony M. Kennedy characterized the statute as vague and overbroad concerning the speech it attempted to regulate and as viewpoint discriminatory by restricting debate on one side of the abortion issue.

In McCullen v. Coakley, 573 U.S. ____ (2014), the Supreme Court indicated that state restrictions limiting individuals opposing abortion to come within 35 feet of a clinic were too restrictive in part because they interfered with the traditional First amendment rights of individuals using public walkways and sidewalks.

This article was originally published in 2009 and updated in 2017. Brandi Snow is an attorney in Clovis, California.