By Elizabeth Beaumont
Related cases in Bad Tendency Test, Incorporation / Application of the Bill of Rights to the States, Freedom of the Press, Criminal Syndicalism Laws 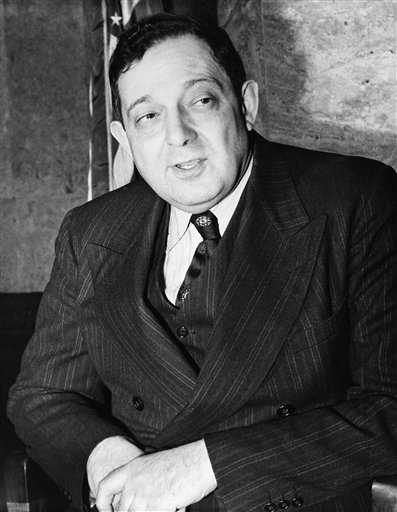 Benjamin Gitlow of New York City pictured in 1942. Gitlow was involved in the court case Gitlow v. New York, in which the Court upheld his conviction for publishing Communist materials. The case was monumental in applying free speech protections to the states. (AP Photo, used with permission from the Associated Press.)

In Gitlow v. New York, 268 U.S. 652 (1925), the Supreme Court voted 7-2 to uphold the constitutionality of New York’s Criminal Anarchy Statute of 1902, which prohibited advocating violent overthrow of the government.

In doing so, however, the Court identified free speech and press as “among the fundamental personal rights and ‘liberties’ protected by the due process clause of the Fourteenth Amendment from impairment by the States.” The Gitlow decision marks the beginning of the incorporation doctrine, which extended the scope of speech rights and, later, most of the Bill of Rights.

Benjamin Gitlow, a socialist leader, was convicted under New York’s criminal anarchy law for publishing 16,000 copies of the Left-Wing Manifesto, which advocated “the proletariat revolution and the Communist reconstruction of society” through strikes and “revolutionary mass action.”

Gitlow fits into a sequence of World War I–era cases involving American socialists and communists who were convicted for speaking or publishing potentially incendiary ideas. Fears of growing socialist and union activities during the red scare prompted Congress and states to adopt restrictions on speech and press.

From this perspective, the Court’s rejection of Gitlow’s freedom of expression claim was generally consistent with its federal-level precedents. The Court upheld Gitlow’s conviction on the basis that governments may restrict or punish speech “containing or advocating, advising or teaching the doctrine that organized government should be overthrown by force, violence or any unlawful means.”

Viewed from another perspective, however, Gitlow represents a monumental shift in the Court’s approach to free speech and federalism. For nearly a century following Barron v. Baltimore (1833), the Court had treated the Bill of Rights, including the First Amendment, as applying only to the federal government.

With Gitlow, the Court ruled that the Fourteenth Amendment’s guarantee that individuals cannot be ”deprived of liberty without due process of law” applies free speech and free press protections to the states.

Through this so-called incorporation doctrine, the Court opened the door for the eventual case-by-case protection of nearly all other guarantees in the Bill of Rights under the Fourteenth Amendment’s due process clause. Thus, Gitlow helped initiate the modern constitutional law era, extending the reach of constitutional rights and placing new limits on states.

Although some suggest that Chicago, B. and Q. R. Co. v. Chicago (1897) is the first appearance of the incorporation doctrine, the Court appears in that case to have relied entirely on an Illinois state statute providing for just compensation rather than on the Fifth Amendment’s just compensation requirement for property takings.

Gitlow also offers competing interpretations of Justice Oliver Wendell Holmes Jr.’s clear and present danger test — set out in Schenck —which holds that government may restrict speech to prevent subversion or insurrection only when there exists a “clear and present danger” that speech “will bring about the substantive evils [the state] has a right to prevent.”

Justice Edward Terry Sanford and the majority construed the test loosely. The Court admitted that Gitlow’s manifesto did not incite violence, but rejected his claim that speech should be punishable “only in circumstances where its exercise bears a causal relation with some substantive evil, consummated, attempted or likely.”

Rather, Sanford wrote, “A single revolutionary spark may kindle a fire that, smouldering for a time, may burst into a sweeping and destructive conflagration.” Arguing that incendiary speech may be suppressed “preemptively,” Sanford asserted that governments cannot be required to wait until revolutionary publications “lead to actual disturbances of the public peace or imminent and immediate danger of its own destruction” but can “suppress the threatened danger in its incipiency” or “extinguish the spark without waiting until it has enkindled the flame or blazed into the conflagration.”

In dissent, Holmes, joined by Justice Louis D. Brandeis, insisted that Gitlow’s speech rights had been violated and that the clear and present danger test should be interpreted more stringently: “it is manifest that there was no present danger of an attempt to overthrow the government by force on the part of the admittedly small minority who shared the defendant’s views.”

It would take more than 30 years, however, for the Court to adopt a significantly more rigorous standard for evaluating restrictions on potentially incendiary speech in Brandenburg v. Ohio (1969).

This article was originally published in 2009. Elizabeth Beaumont is an Associate Professor and the Director of Legal Studies at the University of California, Santa Cruz.