By Simon Stern
Other articles in Controversial Works 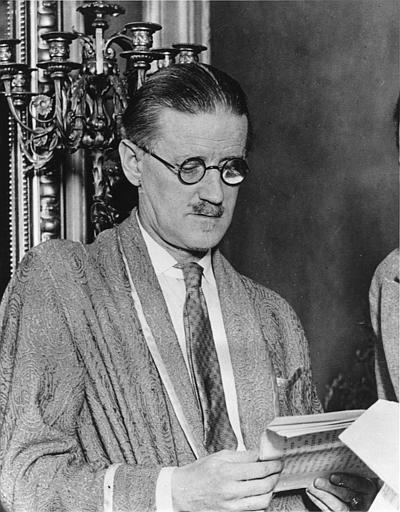 Irish novelist James Joyce, author of "Ulysses," is shown in this 1931 photograph. A U.S. magazine that was publishing segments of Ulysses was fined in 1921 by a New York court that found the book obscene after a chapter was published describing the main character masturbating. A few years later, Random House Publishers wanted to publish the book in the United States and arranged a challenge. This challenge resulted in a district court judge addressing the issue of freedom of expression and concluding the book was not obscene. The decision was upheld by the Second U.S. Circuit Court of Appeals in a precursor to later obscenity-speech cases. (AP Photo, used with permission from the Associated Press)

James Joyce’s Ulysses, one of the most important novels of the twentieth century, was declared obscene by a U.S. court while it was being published serially in the American literary magazine The Little Review from 1918 until 1920.

The novel, which describes a day in the life of Leopold Bloom, was published in book form in Paris in 1922 by Sylvia Beach’s Shakespeare and Company.

In February 1921, the New York Court of Special Session ruled that Joyce’s work was obscene and fined the editors of The Little Review fifty dollars each. As a result of this decision, Joyce was unable to secure an American publisher for his book, although a pirated version did appear in New York in 1929.

In 1933 Random House Publishers, seeking to challenge the ban, imported the Paris edition and arranged to have the book seized by customs officials.

The government then moved for forfeiture. In United States v. One Book Called Ulysses (1933), district court judge John M. Woolsey addressed the issue of free expression by looking at the novel’s “effect on a person with average sex instincts.” Woolsey concluded that Ulysses had no prurient effect on such a person, and to confirm this he consulted two friends and “literary assessors,” Henry Seidel Canby (editor of the Saturday Review of Literature) and Charles E. Merrill Jr. (cofounder of Merrill Lynch).

A divided panel of the Second Circuit affirmed the district court’s ruling. Judge Augustus M. Hand (joined by his more famous cousin, Judge Learned Hand) declined to apply the rule established in an English court case, Regina v. Hicklin (1868), that classified as obscene any work having a “tendency ... to deprave and corrupt those whose minds are open to ... immoral influences.”

This article was originally published in 2009. Simon Stern is Professor of Law and English at the University of Toronto.  He has published articles and book chapters on obscenity, copyright, criminal procedure, legal fictions, and the history of the common law.