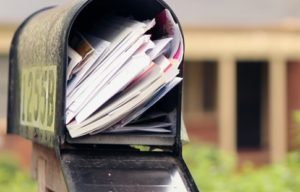 In 1970, the Supreme Court upheld a federal law allowing the U.S. Post Office to stop unwanted mailings of sexual materials at the recipient's request. In Rowan v. U.S. Post Office Department, the court held that a person's right to privacy and to be let alone in his own home prevailed over First Amendment claims of publisher. (Photo illustration, public domain)

In Rowan v. U.S. Post Office Department, 397 U.S. 728 (1970), the Supreme Court sustained a federal law permitting addressees to prohibit all future mailings from a specified sender. Although conceding that the statute undoubtedly impeded the flow of ideas, the Court held that this was subordinate to the right of people in their homes to be free from offensive and unwanted material.

The case presented a classic clash between First Amendment rights and privacy interests.

The federal statute in Rowan required the U.S. Post Office to enforce the desire of any person to prevent the postal delivery of advertisements of products considered by that person to be “erotically arousing or sexually provocative.”

This statute was passed in response to public outrage over unsolicited advertisements that recipients found offensive because of their lewd and salacious character. In particular, Congress was concerned about the ability of minor children to obtain such material, despite their parents’ objections.

The statute allowed an individual to notify the Postmaster General and demand that specific advertisers stop mailing any future advertisements to that individual’s home. As the Court recognized, the statute conferred no discretion on the government regarding content of advertisements; all the discretion was left to the individual recipient.

In their legal challenge to this statute, advertisers — including Daniel Rowan who did business as American Book Service — argued that it restricted their right to communicate.

The Court, in an opinion written by Chief Justice Warren E. Burger, acknowledged this effect but stated that the right of people “to be let alone” in their own home had to be balanced against the rights of others to communicate.

Because people were a captive audience in their home, they had to be given some right of control over unwanted mail. Burger wrote that nothing in the Constitution gave a vendor the right to send unwanted material into an individual’s home. Consequently, a mailer’s right to communicate ceased at the mailbox of an unwilling addressee.

Thus, Rowan suggests that within the privacy of his or her home, a person’s right to censor prevails over anyone else’s right to speak. This sanctity of the home has been consistently recognized, as in Frisby v. Schultz (1988), in which the Court described the home as a hallowed sanctuary where individuals are entitled to respite from the bombardments of social life.

In his concurrence, Justice William J. Brennan Jr. agreed with the Court’s holding but stated that constitutional difficulties might arise if parents tried to use the statute to stop delivery to their eighteen-year-old children still residing with them of materials the parents found offensive.