By Douglas C. Dow
Other articles in Documents 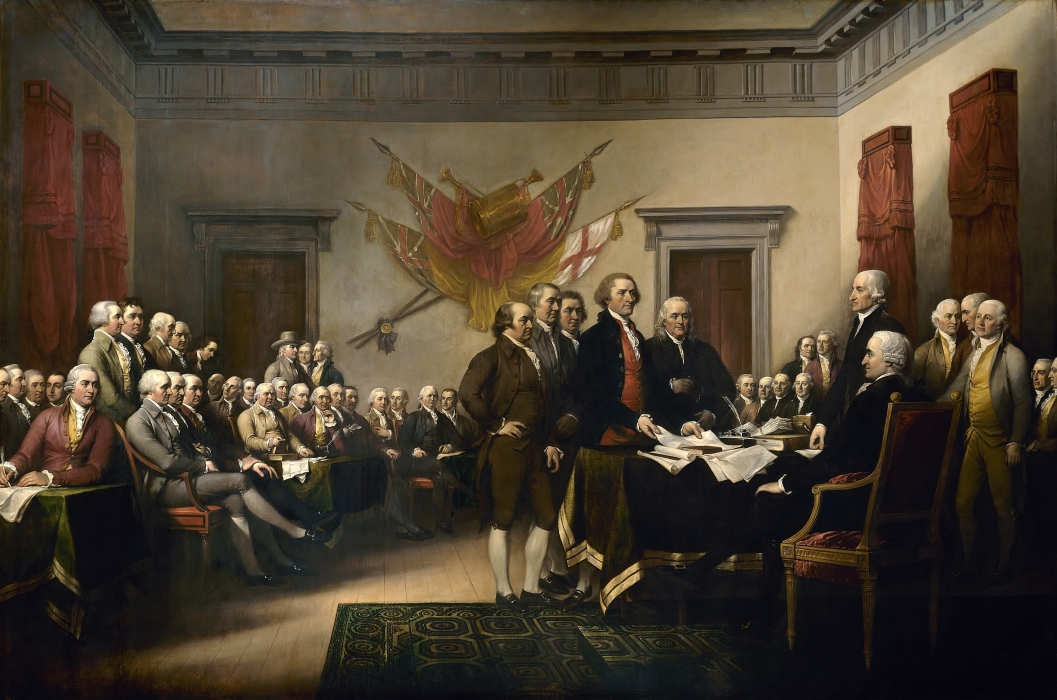 The Declaration of Independence, formally adopted by the Continental Congress on July 4, 1776, announced the United States’ independence from Britain and enumerated to “a candid World” the reasons necessitating this separation. Today the Declaration stands as the best-known document of the American founding, describing not only the U.S. origin, but also its goals and values. (Image depicting the five-man drafting committee of the Declaration of Independence presenting their work to the Congress by John Trumbull via Wikimedia Commons, painted 1819, public domain)

The Declaration of Independence, formally adopted by the Continental Congress on July 4, 1776, announced the United States’ independence from Britain and enumerated to “a candid World” the reasons necessitating this separation. Today the Declaration stands as the best-known document of the American founding, describing not only the U.S. origin, but also its goals and values.

The Declaration’s indictments against King George III show a vigorous exercise of freedom of speech and press; further, by using the document to express frustration with rebuffs received to previous petitions to the king, the founders paved the way for later recognition of the right of petition, which is contained within the First Amendment.

In June 1776 the Continental Congress appointed John Adams, Benjamin Franklin, Roger Sherman, Robert Livingston, and Thomas Jefferson to the committee that would write the Declaration.

Jefferson’s fellow members chose him to write the initial draft, largely due to his rhetorical skills. Although Jefferson claimed that he did not refer to any books or pamphlets while drafting the Declaration, the document bears the clear marks of previous charters of civil liberties and limited government, such as the 1628 Petition of Right, the 1689 English Bill of Rights, and the 1776 Virginia Declaration of Rights.

The heart of the Declaration lies in the 27 separate indictments against George III, whom the founders label a tyrant unfit to rule over a free people. In making such accusations, the authors risked punishment for what the British considered a form of seditious libel.

The charges list specific abuses or violations of British statutory or constitutional law. Some are articulated in broad language, such as a charge that the king refused to assent to laws beneficial to the public interest of the colonies.

Others address more parochial concerns; Adams, for example, inserted an accusation against the Crown for moving legislatures to uncomfortable and distant places, a reference to the relocation of the Massachusetts legislature from Boston to Cambridge, four miles away. The Declaration’s indictments are not made, as is often believed, in the name of universally valid natural rights but rather are based upon the legal customs and traditions accepted by the Crown and Parliament.

Somewhat ironically, therefore, only as British subjects did the Declaration’s signers have the authority to declare their confederation with Britain broken, and to bring into existence their new identities as Americans.

Declaration addressed to 'opinion of Mankind'

It is fitting, then, that the Declaration is not addressed to the Crown, but rather to the broader “opinion of Mankind” as the United States seeks entrance into the community of nations. Jefferson recasts the British Empire as a confederation of peoples and describes the colonialists as a people breaking their alliance with other people, thereby dissolving that confederation without committing an act of civil war.

The Declaration does not attack the way in which George III ruled Britain, advocate the overthrow of the British regime outside the American Colonies, or call for the other peoples of the British Empire similarly to rise up.

The second paragraph locates the specific indictments against the Crown into a broader framework of contractual government. In so doing, Jefferson makes the Declaration’s most famous assertion that “all Men are created equal,” each possessing the inalienable right to “Life, Liberty, and the Pursuit of Happiness.”

By 1776 such concepts, derived from British Whigs like John Locke and Algernon Sydney, had become common in the Colonies. By the 19th century, politicians such as Abraham Lincoln saw in the Declaration’s universalistic aspiration a blueprint for a new and more egalitarian political community, one that included African-Americans and, later, women.

Declaration was unclear about relationship between states

The final section formally declares the independence, in fact and by right, of the United States but does not define the nature of the relationship that these “united states” have with one another.

The text is unclear as to whether they are united only in their grievances and their act of independence, or whether a more permanent political or legal form of union exists.

The Articles of Confederation and the U.S. Constitution would later define the relationship among the states with greater clarity.