By Hana M. Ryman and J. Mark Alcorn
Other articles in Legal Terms and Concepts Related to Religion 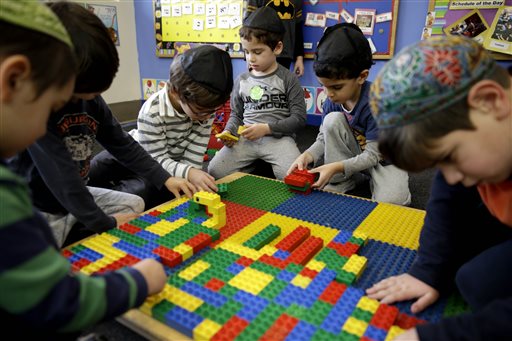 Beginning in 2015, New York City pre-K classes were permitted to break in the middle of the day for “non-program” activities such as prayer. Civil liberties groups said the prayer break in a publicly-funded classroom may violate the constitutional separation of church and state, similar to the "released time" arrangements of earlier years. In this photo, children at a pre-kindergarten class at the Al & Sonny Gindi Barkai Yeshivah in Brooklyn, New York, play with building blocks.  (AP Photo/Seth Wenig, used with permission from the Associated Press)

Released time programs allow for public school students, who have written requests from their parents, to take time during regular school hours to receive religious instruction.

In many ways, this program is an invitation for constitutional conflict, pitting the establishment clause of the First Amendment against those wishing to initiate and participate in such programs.

The first released time programs began in 1914, in Gary, Indiana, when William Wirt, the superintendent of schools, enlisted 600 students to enroll in off-site religious instruction during the school day.

For the most part, any generally accepted religious organization could take part in the programs.

The first major challenges to these programs as separation of church and state issues came in the 1940s.

In the first case, which did not directly involve released time but would establish a precedent for dealing with such issues, a New Jersey resident, Arch R. Everson, challenged a state law that allowed for parents to be reimbursed for public transportation expenses for their children. Reimbursement could be claimed by parents of students attending Roman Catholic schools as well as those attending public schools. Everson said the law was in violation of the establishment clause of the Constitution.

The controversy reached the Supreme Court in Everson v. Board of Education (1947), where the Court held that the law did not violate the Constitution.

In his majority opinion Justice Hugo L. Black ruled that the reimbursement program was neutral and treated all residents the same regardless of their religion. Black’s opinion stated that the government could not do something that would aid one religion, aid all religions, or prefer one religion over another and that the New Jersey program did none of these. More important than the immediate ruling, however, Everson is significant because, in this case, the Supreme Court incorporated the establishment clause into the due process clause of the Fourteenth Amendment, thus making this clause of the First Amendment applicable to state and local laws.

At about the time that released time programs reached their apex, members of the dominant religions in Champaign, Illinois, formed a voluntary association called the Champaign Council on Religious Education.

In cooperation with the board of education, it offered weekly voluntary classes in religious instruction to public school students in grades four through nine. Parents could choose whether to send their children to the classes and, if so, to which class. The classes for Protestant students were held in separate rooms within the school building; Jewish and Catholic students met in places of worship in the community. The location of the classes was a departure from the World War I–era classes, which were held in local places of worship.

Furthermore, although the teachers were paid by independent religious organizations, their appointments were subject to approval by the public school superintendent, and the school district used its resources to print the forms for the parents to sign.

Vashti McCollum, an atheist whose son attended an elementary school in Champaign, challenged this program in the Illinois court system.

McCollum said her son had been ostracized and embarrassed by his schoolmates because she refused to let him attend the religion classes at his public school. She further contended that the classes were a misuse and waste of taxpayers’ money, were discriminatory against minority faiths, and were an unconstitutional entanglement of church and state.

McCollum lost in two Illinois courts before the case found its way to the Supreme Court.

In McCollum v. Board of Education (1948), the Court held, with Justice Black writing the majority opinion, that the practice in Champaign was, without question, using tax-established and tax-supported schools to aid religious groups in spreading their faith and was banned by the First Amendment.

An important issue in McCollum was whether the First Amendment’s ban on establishing religions meant that all sects must be treated equally or whether it required, as McCollum contended, strict neutrality between belief and unbelief. The eight-member majority of the Court struck down the Illinois law on the grounds that the religious groups were using the public school system’s compulsory attendance laws to support their program, that there was unconstitutional pressure to attend the classes, and, again, that the classes were held on school property.

Four years later, when the Court heard another released time case, new conditions existed that had not been present in 1948, including a desire by many to distinguish the United States from the “godless communists” and a change in the composition of the Supreme Court.

In Zorach v. Clauson (1952), the Court thus upheld a New York City program that was held off school property. The city’s board of education had prohibited any announcement about the program in school or any comment by teachers or administrators about students’ attendance or nonattendance at the religious classes.

In a 6-3 decision the Court ruled that New York City’s released time program neither constituted the establishment of religion nor interfered with the free exercise of religion. Because public facilities were not being used for the purpose of religious instruction and no student was forced to go to the religious classroom, there was no conflict with the First Amendment.

The majority opinion, written by Justice William O. Douglas, stated that there was no constitutional requirement that makes it necessary for government to be hostile to religion and to throw its weight against efforts to widen the effective scope of religious influence. Justice Black, who wrote the majority opinion in both Everson and McCollum, wrote a vigorous dissent, stating there was no difference between McCollum and Zorach.

Because of the opinion delivered in Zorach, the conditional release of students for religious instruction thus is not unconstitutional unless there is pressure for students to attend or unless taxpayers’ money is being used to support such a program.

Courts continue to express concern in First Amendment cases that schools do not take advantage of children’s impressionability and coerce them directly, or through peer pressure, to participate in religious exercises against their beliefs.

Released-time programs continue to exist with some districts adhering to the guidelines of neutrality and noncoercion set forth by the Supreme Court and some ignoring those guidelines, hoping that the fact that they are operating in an unconstitutional manner will be ignored.