By Stephen Wermiel
Other articles in Legal Terms and Concepts Related to Speech, Press, Assembly, or Petition, Freedom of the Press issues and topics 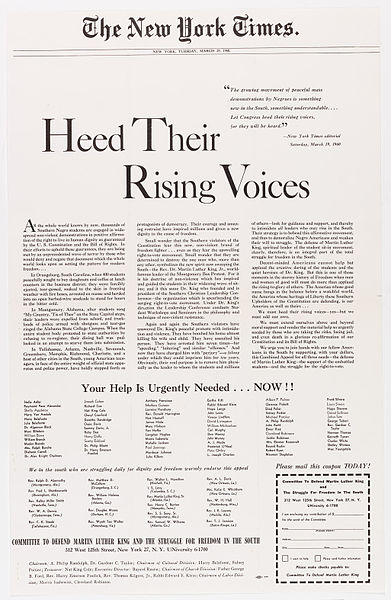 Actual malice is the legal standard established by the Supreme Court for libel cases to determine when public officials or public figures may recover damages in lawsuits against the news media. The standard came from the case New York Times Co. v. Sullivan (1964) involving this advertisement alleging abuses by the Montgomery police. (The New York Times advertisement that prompted a libel lawsuit by a city commissioner in Montgomery County who oversaw police, via National Archives, public domain)

Actual malice is the legal standard established by the Supreme Court for libel cases to determine when public officials or public figures may recover damages in lawsuits against the news media.

Beginning with the unanimous decision in New York Times Co. v. Sullivan (1964), the Supreme Court has held that public officials cannot recover damages for libel without proving that a statement was made with actual malice — defined as “with knowledge that it was false or with reckless disregard of whether it was false or not.”

The decision in Sullivan threw out a damage award against the New York Times, but only six of the nine justices fully agreed with Justice William J. Brennan Jr.’s use of the actual malice standard, which he derived from a Kansas Supreme Court ruling, Coleman v. MacLennan (Kan. 1908). Justices Hugo L. Black and Arthur J. Goldberg, joined by Justice William O. Douglas, thought the Court should go farther to protect criticism of public officials and debate about public affairs.

In subsequent cases, the Supreme Court elaborated on the actual malice test in the libel context. In St. Amant v. Thompson (1968), the Court recognized the standard as a subjective one, requiring proof that the defendant actually had doubts about the truth or falsity of a story. It extended the application of the actual malice test to public figures, not just public officials, in Curtis Publishing Co. v. Butts (1967).

Under the actual malice standard, if the individual who sues is a public official or public figure, that individual bears the burden of proving that the media defendant acted with actual malice. The amount of proof must be “clear and convincing evidence,” and the standard applies to compensatory as well as to punitive damages.

Concerning private figures, however, the Court ruled in Gertz v. Robert Welch, Inc. (1974) that actual malice is not required for recovery of compensatory damages, but is the standard for punitive damages.

The Supreme Court has expanded the reach of the First Amendment to afford the news media protection against other types of lawsuits designed to protect individual privacy, including those alleging intentional infliction of emotional distress, as in Hustler Magazine v. Falwell (1988); disclosure of private facts, as per Florida Star v. B.J.F. (1989); and depicting someone in a false light, as in Time Inc. v. Hill (1967). In all of these cases, the Court applied the same actual malice test to further recognize the principle of free and open comment in a democratic society.

The actual malice standard has at times drawn criticism from people in the public eye who think the test makes it too hard for them to restore their reputations and from the news media, which has complained that the standard does not afford enough protection for freedom of speech.

This article was originally published in 2009 and has been updated by encyclopedia staff as recently as July 2021.  Stephen Wermiel is a professor of practice at American University Washington College of Law, where he teaches constitutional law, First Amendment and a seminar on the workings of the Supreme Court. He writes a periodic column on SCOTUSblog aimed at explaining the Supreme Court to law students. He is co-author of Justice Brennan: Liberal Champion (Houghton Mifflin Harcourt, 2010) and The Progeny: Justice William J. Brennan's Fight to Preserve the Legacy of New York Times v. Sullivan (ABA Publishing, 2014).