By Martin Gruberg
Other articles in Issues Related to Religion 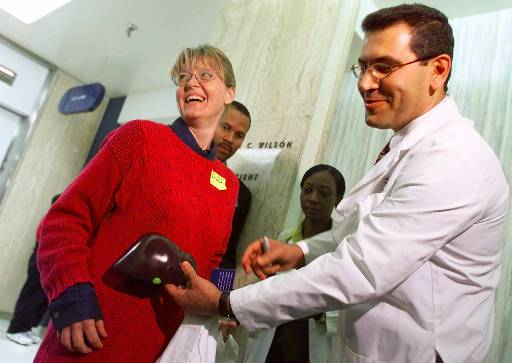 The First Amendment guarantees the free exercise of religion, but debate continues over whether it prevails when medical practitioners determine that conventional medical therapies are necessary but individuals or their families are opposed for reasons of conscience. Jehovah’s Witnesses’ refusal to accept blood transfusions is one example of this conflict. In this photo, Dr. Nicolas Jabbour, right, holds a liver model as he shows Vicky Rush, left, what part of her liver was transplanted into her grandson Aiden Michael Rush, not seen, Wednesday, Feb. 21, 2001 during a news conference at Childrens Hospital in Los Angeles. In what is believed to be the first "bloodless" liver transplant, doctors at the hospital have transplanted part of the liver of Vicky Rush into her seven-month old grandson, without using blood transfusions. This "bloodless" approach, done largely to accommodate religious believes of the family, who are Jehovah's Witnesses, could eventually become a routine protocol in pediatric liver transplant surgeries at the hospital. (AP Photo/Damian Dovarganes, used with permission from the Associated Press)

The First Amendment guarantees the free exercise of religion, but debate continues over whether it prevails when medical practitioners determine that conventional medical therapies are necessary but individuals or their families are opposed for reasons of conscience.

In 1962 a New York state judge ruled that 69-year-old Jacob Dilgard could refuse a blood transfusion on religious grounds. Dilgard died. One year later, Jesse E. Jones, a 25 year-old Jehovah’s Witness, needed an urgent blood transfusion to prevent her death from a ruptured ulcer. She and her husband, who had a young child, refused the transfusion, so the hospital turned to the federal court for an immediate order permitting it to act to save Jones’s life. Judge J. Skelly Wright met with the couple, who reiterated their opposition, while the physicians affirmed the matter’s urgency. Focusing on the imminent threat to the woman’s life, Judge Wright ordered the transfusions.

The Illinois Supreme Court ruled in the case of In re Estate of Brooks (1965) that a county judge’s ordered transfusion for a Jehovah’s Witness was an unconstitutional invasion of a person’s religious beliefs. In similar cases, a Milwaukee judge refused to order blood transfusions for a 6-year-old boy whose mother objected. A 41-year-old woman, whose refusal of blood because of her religious beliefs was backed by a judge, died.

In 1982 in Chicago, a Jehovah’s Witness with a leg amputation was given court-ordered blood transfusions to keep him alive so that his children would have a father. Another Jehovah’s Witness, injured in a road accident, refused blood and was transferred to Chicago to receive an experimental blood substitute, but died.

The clash over the free exercise of religion and medical treatment has not been restricted to Jehovah’s Witnesses. A number of controversies have involved Christian Scientists, who believe in healing through prayer. In 1988 Ginger and David Twitchell were charged with manslaughter in the death of their 2-year-old son, whom they had sought to treat through spiritual means for a bowel obstruction. In Commonwealth v. David R. Twitchell and Commonwealth v. Ginger Twitchell (Mass. 1993), Massachusetts’s highest court overturned their conviction, ruling that the couple had not received a fair trial.

Courts struggle to balance rights of parents and children

In 2003 Massachusetts state and local prosecutors and agency officials investigated whether parents of a 7-year-old, who became fatally ill from an undiagnosed case of diabetes, should be charged. The boy had died two days after being sent home from school with complaints of stomach pains.

When it comes to the exercise of religion and medical treatment, the courts clearly struggle to balance the rights of parents, children, religion, and the state. Many believe that prosecuting already grieving parents makes little sense. Others argue that there is no religious right to endanger a child’s health.

A related issue is whether the state can intervene in the place of a parent. In Jacobson v. Massachusetts (1905), the Supreme Court had upheld compulsory smallpox vaccinations despite individual religious beliefs, ruling that personal freedoms must at times be relinquished for the benefits of the larger society.

In 1971 the Court received Miller v. Winter — the case of a Christian Scientist involuntarily residing in a mental institution who refused to take tranquilizers — but declined by a vote of 9-0 to review it. A divided court of appeals upheld the free-exercise claim.

In 1997 the Court refused to hear Children’s Healthcare Is a Legal Duty, Inc. v. Deters (6th Cir. 1996). The 6th U.S. Circuit Court of Appeals had determined that the 11th Amendment provided immunity to a prosecutor upholding an Ohio law that accepted parental use of religiously inspired treatment for their children. Forty-six states have statutes that allow parents to use their religious beliefs as a defense against prosecution for withholding medical treatment from their children.

Minority faiths are not required to provide medical treatment to children

In the Child Abuse Prevention Treatment Act of 1996, Congress legislated that there was no federal requirement that a child must be provided “medical service or treatment against the religious beliefs of the parent or legal guardian.”

The minority faiths protected under the act include the End Time Ministries, a group active in Florida, Montana, South Dakota, and the Midwest whose followers believe in delivering babies at home without medical assistance and that illness is the work of Satan, a member’s lack of faith, or an unconfessed sin; the Church of the First Born, a sect active in Colorado and Oklahoma that does not believe in providing medical care for children; the Faith Assembly, a church active in Ohio and Indiana in which the majority of members’ unnecessary deaths have been of children or mothers in childbirth; and the Faith Tabernacle, active mostly in Pennsylvania and New Jersey, and with cases of children dying of tumors, pneumonia, starvation, and dehydration (after a fever, infection, vomiting), as well as measles.

In the late 20th and early 21st centuries, the United States has served as a refuge to Hmong displaced from their native Cambodia. Some Hmong employ shamans to effect cures for ailments because surgically entering the body violates their religious beliefs.

The courts in some instances have addressed the religion-versus-medicine issues in regard to Hmong beliefs. Court opinions continue to differ regarding personal religious beliefs and medical care. The Supreme Court, at this time, has not taken up the issue itself, and matters continue to be evaluated on a case-by-case basis.