By Emilie S. Kraft
Other articles in Issues Related to Religion 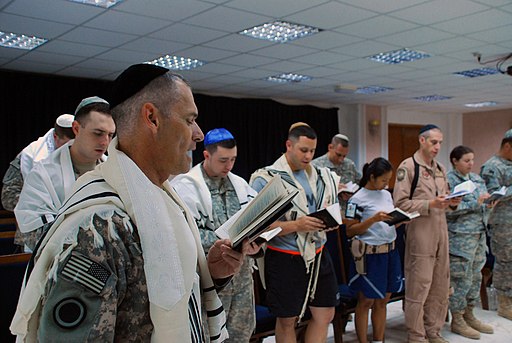 Government-funded military chaplain programs have been upheld by the courts as constitutional despite appearing to violate the establishment clause of the First Amendment. The free exercise of religion clause and war powers clause must also be considered, said the Second Circuit Court of Appeals in a 1985 case. In this photo (public domain) by the U.S. Army, Avroham Horovitz, Multi-National Coprs-Iraq rabbi, sings a prayer with the congregation to welcome in the Sabbath, Victory Chapel, Camp Victory in 2009.

Chaplaincy programs established and funded by the government appear on their face to be a clear violation of the establishment clause of the First Amendment.

State and federal courts have recognized, however, that the chaplaincy is one area in which the free exercise rights of affected prisoners and military personnel outweigh any potential establishment clause violation.

Court has said chaplaincy programs do not violate the First Amendment

As Justice William J. Brennan Jr. noted in his concurrence in Abington School District v. Schempp (1963), “Since government has deprived such persons of the opportunity to practice their faith at places of their choice,... government may, in order to avoid infringing the free exercise guarantees, provide substitutes where it requires such persons to be.”

Not to provide such substitutes, he observed, would signal hostility toward religion rather than neutrality.

Access to chaplains does not entitle soldiers and inmates to a spiritual adviser of their choice. The Supreme Court has held that prisoners must only be provided a “reasonable opportunity” to exercise their religious freedom.

Most chaplains are trained to provide programs and services for the majority of faiths, however; and they are strictly prohibited from proselytizing the communities they serve.

Although the Supreme Court has never addressed the constitutionality of military or prison chaplains, the Second Circuit Court of Appeals explicitly held in Katcoff v. Marsh (2d Cir. 1985) that the military chaplaincy does not violate the establishment clause.

In that case, two federal taxpayers challenged the constitutionality of the U.S. Army’s chaplaincy on the grounds that it was funded by government, as opposed to private, sources.

The court held that if viewed in isolation, the chaplaincy would fail under the Lemon test. The court also noted, however, that the establishment clause must be interpreted in light of other constitutional provisions, namely the free exercise clause and the war powers clause.

Rejecting the application of the Lemon test in this case, the court stated that in light of the courts’ traditional deference to the military, the standard to evaluate the chaplaincy should be “whether, after considering practical alternatives, the chaplaincy program is relevant to and reasonably necessary for the Army’s conduct of our national defense.”

In Theriault v. Silber (1977), the Fifth Circuit Court of Appeals similarly held that the prison chaplaincy passes constitutional muster, although it provided hardly any explanation.

The Supreme Court has directly addressed the chaplaincy only within the context of the legislature. In Marsh v. Chambers (1983), the Court held that a Nebraska legislative chaplaincy program did not violate the establishment clause.

The Court did not apply the Lemon test, but instead based its decision exclusively on the history and tradition of the legislative chaplaincy. It noted that the First Congress authorized the appointment of paid chaplains, which had continued uninterrupted for more than 200 years. The Court reasoned that the First Congress, which is typically afforded great weight in interpreting the Constitution, demonstrated by its hiring of legislative chaplains that such a practice does not violate the establishment clause. Because the Court made no effort to reconcile Marsh with existing establishment clause cases applying the Lemon test, it appears — as Justice Brennan pointed out in his dissent — that the majority was “carving out an exception to the Establishment Clause.”

The Eighth Circuit Court of Appeals in Carter of Broadlawns Medical Center (1988) seems to support Justice Brennan’s contention that the holding in Marsh is limited to its specific facts.

In Carter, taxpayers challenged a county hospital’s decision to hire a paid chaplain on establishment clause grounds. The court rejected the hospital’s argument that Marsh supported the program, noting that “evidence of Iowa state practices sheds no light on the legislative intent of the First Amendment’s framers, as the evidence did in Marsh.”

Instead, the court analyzed the hospital’s chaplaincy program under the Lemon test and held that it passed constitutional muster since the chaplain provided general counseling services and did not proselytize.

This article was originally published in 2009. Emilie S. Kraft is an administrative law judge in Birmingham, Alabama.