By David Schultz
Other articles in Issues Related to Religion 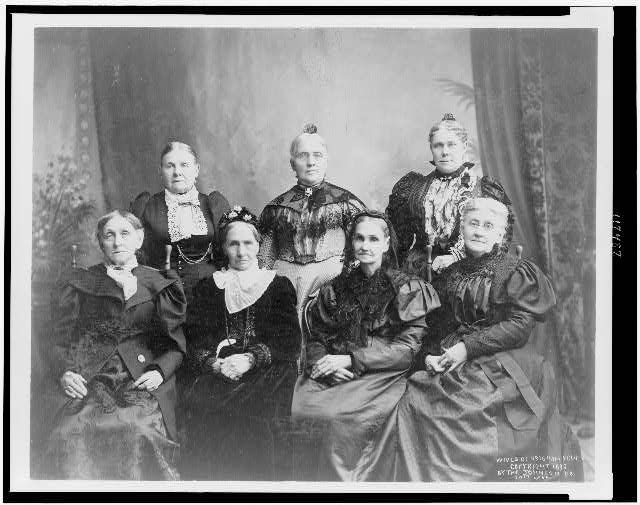 This image shows seven of the wives of Brigham Young, the second president of the Church of Jesus Christ of Latter-Day Saints. Polygamy is a practice in which a person is married to more than one person at the same time, most commonly a man to several wives. Polygamy is often based on traditional cultural practices or religious beliefs. Constitutionally, polygamy raises important issues under the free exercise clause of the First Amendment. In addressing these issues, the Supreme Court has sought to distinguish the regulation of religious beliefs from the regulation of practices. (Image via Library of Congress, public domain)

Polygamy is a practice in which a person is married to more than one person at the same time, most commonly a man to several wives. Polygamy is often based on traditional cultural practices or religious beliefs. Constitutionally, polygamy raises important issues under the free exercise clause of the First Amendment. In addressing these issues, the Supreme Court has sought to distinguish the regulation of religious beliefs from the regulation of practices.

Reynolds case found that polygamy was not protected by First Amendment

The basis of the distinction between religious belief and practice can be traced to an 1879 decision in Reynolds v. United States, which involved an effort by the United States government to make illegal the then current Mormon practice of polygamy (later repudiated by the mainline church) in the Utah Territory. The Court wrote: “[W]e think it may safely be said there never has been a time in any State of the Union when polygamy has not been an offence against society, cognizable by the civil courts and punishable with more or less severity. In the face of all this evidence, it is impossible to believe that the constitutional guaranty of religious freedom was intended to prohibit legislation in respect to this most important feature of social life. . . . Can a man excuse his practices to the contrary because of his religious belief? To permit this would be to make the professed doctrines of religious belief superior to the law of the land, and in effect to permit every citizen to become a law unto himself.”

In Reynolds the Court ruled that polygamy was not protected under the free exercise clause. In another 19th century case involving polygamy, Davis v. Beason (1890), the Court further developed the distinction between religious belief and action, concluding that “however free the exercise of religion may be, it must be subordinate to the criminal laws of the country, passed with reference to actions regarded by general consent as properly the subjects of punitive legislation.”

Reynolds and Davis established a judicially crafted definition of religion that distinguished belief from practice and, in the process, upheld laws banning polygamy, which many saw as an evil similar to that of slavery (the issue had delayed Utah’s entry into the Union). The question raised in these cases was, should society tell a religious sect that it may not voluntarily engage in polygamy if the members honestly and sincerely believe that polygamy is ordained by the Bible or other religious texts? The Court responded to a similar question in Sherbert v. Verner (1963), where it overturned a denial of unemployment benefits to a Seventh-day Adventist who was fired because she refused to work on Saturday, her Sabbath. Here, the Court seemed to close the belief-practice distinction made in Reynolds and Davis.

Yet in Employment Division, Department of Human Resources of Oregon v. Smith (1990) the Court appeared to open that distinction up once more. In this case, members of a Native American religion had been dismissed from work and denied unemployment compensation because they too wished to practice their faith — in this instance, to engage in the ceremonial use of peyote in a religious practice. The Court upheld the dismissal and the denial of compensation because the law against using peyote applied generally, not to religious practice specifically. Congress sought to close the distinction again in the Religious Freedom Restoration Act of 1993, but that legislation was declared unconstitutional in City of Boerne v. Flores (1997). The exact status of the distinction is now not clear.

Polygamy cases have continued to come up

While the 19th century cases on polygamy were originally directed toward the Church of Jesus Christ of Latter-day Saints, the arrival of many new cultures engaging in this marital practice may yet again force the Court to confront not only whether banning it violates the free exercise of religion but also if proscribing monogamy is an endorsement of specific religious belief.

In recent years, individuals have continued to challenge or defend themselves from state laws criminalizing polygamy. In State v. Holm (2006), the Utah Supreme Court rejected an individual’s free exercise challenge to a bigamy conviction. The U.S. Supreme Court denied review. Some Supreme Court decisions relative to the right of privacy could provide a basis for liberalizing laws relative to polygamy, at least in cases where all individuals involved entered the relationships knowingly and consensually. The 2008 raid in Texas on a polygamous sect suggests that the issue over polygamy and the First Amendment may continue well into the 21st century.