Public Buildings and Religious Use 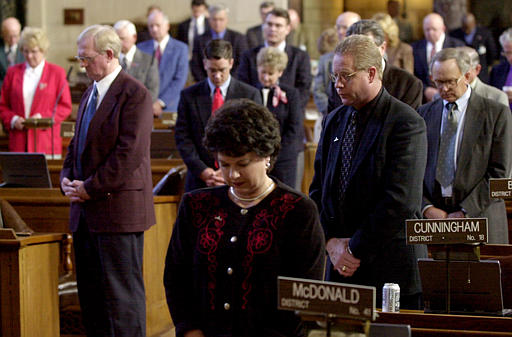 In the United States, where the First Amendment prohibits laws respecting an “establishment” of religion, lines are drawn between public and religious buildings. The line is not bright, because courts have accepted some acknowledgments of civil religion in public places and because government often must treat religious groups the same as secular groups with respect to public access. In Marsh v. Chambers (1983), the Supreme Court decided that a state legislature had the right to hire a chaplain to begin each day’s proceedings with prayer. In this photo, Nebraska lawmakers stand in the dimly lit legislative chamber Thursday, Oct 25, 2001 during a prayer at the opening of a special legislative session in Lincoln, Neb. (AP Photo/Nati Harnik, used with permission from the Associated Press)

In the United States, where the First Amendment prohibits laws respecting an “establishment” of religion, lines are drawn between public and religious buildings. The line is not bright, because courts have accepted some acknowledgments of civil religion in public places and because government often must treat religious groups the same as secular groups with respect to public access. Significantly, public buildings appear to have been frequently used for religious purposes in early American history (Hutson 1998).

Consistent with decisions that have prohibited most state aid to parochial schools, in Aguilar v. Felton (1985) the Supreme Court struck down New York City’s payments to public school teachers who taught secular subjects to students in parochial school buildings. In reviewing the same circumstances 12 years later in Agostini v. Felton (1997), however, it decided that the mere presence of such teachers in the schools for such purposes did not constitute impermissible state endorsement of religion.

Along with these cases are others that recognize the rights of voluntary religious groups to meet at public schools on an equal basis with noncurricular secular groups (tied to the open forum doctrine). The Court established this right for college students in Widmar v. Vincent (1981), and further extended it to all public schools receiving federal funds in Board of Education of the Westside Community Schools v. Mergens (1990), after Congress adopted the Equal Access Act of 1984, prohibiting regulations that would forbid student meetings because of “the religious, political philosophical, or other content of the speech at such meetings.”

Court has dealt with religious displays on public property

A number of cases have dealt with religious displays on public property. These include Lynch v. Donnelly (1984), where the Court ruled that the Pawtucket, Rhode Island, display of a Christian crèche in conjunction with numerous other symbols of the Christmas season on public property did not constitute undue state endorsement of religion. By contrast, in County of Allegheny v. American Civil Liberties Union (1989) the Court ruled that such a display standing alone in a county courthouse did convey improper state endorsement of such activity, while an outside display of a menorah and a Christmas tree did not. Similarly, in McCreary County v. American Civil Liberties Union (2005) the Supreme Court struck down a display of the Ten Commandments in a public building, which it thought had the impermissible purpose of favoring religion, whereas in Van Orden v. Perry (2005) it permitted a monument related to the Ten Commandments that was one of many monuments and historical markers on the grounds of the Texas state capitol.

Decisions in Lamb’s Chapel v. Center Moriches Union Free School District (1993), and in Good News Club v. Milford Central School (2001) established the rights of religious groups to rent public school buildings on an equal basis with other groups once school policies had effectively established such locales as open public forums. The first involved the use of a schoolhouse for the showing of a religious film; the second involved after-school meetings by a religious club. These decisions were litigated as free speech violations, as the school officials treated religious expression worse than nonreligious expression.

Court has said chaplains can open state legislatures in prayer

In Marsh v. Chambers (1983), the Supreme Court bypassed its typical establishment clause analysis under the three-part Lemon test (which looks for a secular legislative purpose, a primary effect that neither advances nor inhibits religion, and avoidance of “excessive entanglement” of church and state) and decided that historical practice dating back to the first U.S. Congress, and before, established that a state legislature had the right to hire a chaplain to begin each day’s proceedings with prayer. Although the Supreme Court has yet to resolve all the issues connected to such prayers, it has generally been more tolerant of religious expression in settings that involve adults than it has in settings involving adolescents, who are thought to be more susceptible to peer pressure.

A number of the amendments that have been proposed to allow voluntary public prayer back in public schools have applied to public buildings in general. Local governments continue to debate whether it is permissible to begin public meetings with prayer.