By Derek H. Davis
Other articles in Issues Related to Religion 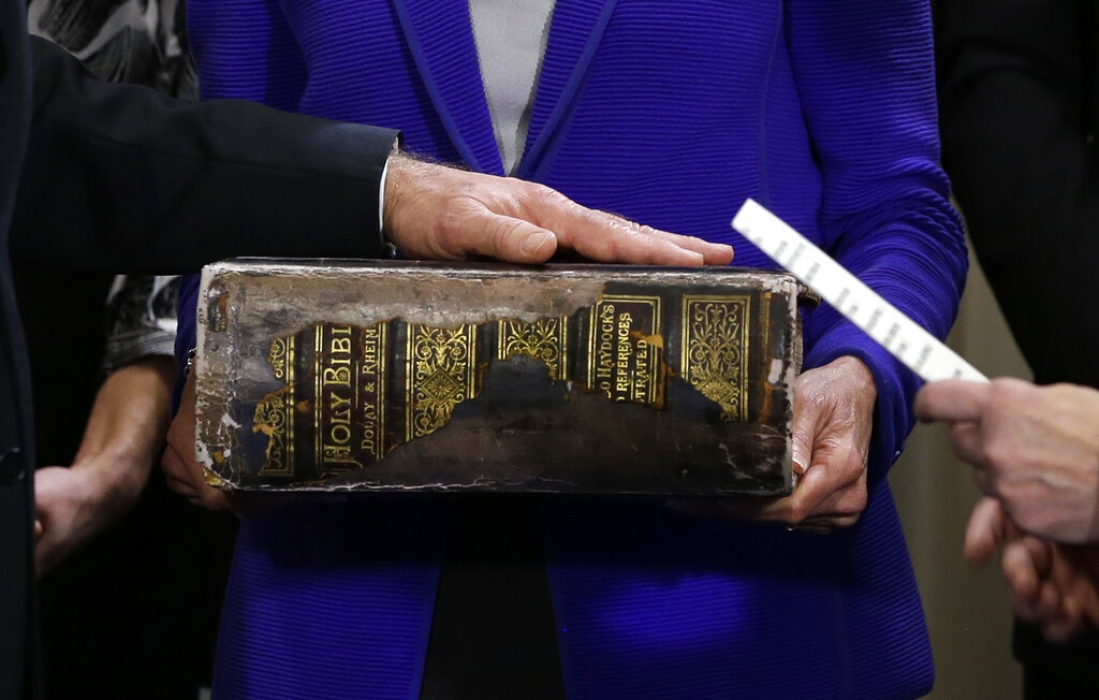 In 1961, the U.S. Supreme Court invalidated religious oaths for officeholders when it overturned Maryland's constitutional requirement for every state official to declare a belief in God, saying requiring a religious test for public office was a violation of the First Amendment. While many presidents have used Bibles for their inaugurations, the Constitution does not require the use of a specific text and specifies only the wording of the president’s oath. That wording doesn’t include the phrase “so help me God,” but every modern president has appended it to their oaths and most have chosen symbolically resonant Bibles for their inaugurations. In this Sunday, Jan. 20, 2013 file photo, Vice President Joe Biden, left, places his hand on the Biden family Bible held by his wife, Jill Biden, center, as he takes the oath of office. (AP Photo/Carolyn Kaster)

Following European custom, all 13 of the original American colonies required an attestation of religious belief or affiliation — a religious oath — as a prerequisite for an individual to hold public office.

These oaths were viewed as instruments of social control, given the traditional view that citizens were trustworthy as civil servants only if they were willing to affirm their allegiance to basic religious tenets. It was not until a U.S. Supreme Court decision — Torcaso v. Watkins (1961) — that such religious tests were invalidated at the state level as violations of the First Amendment’s free exercise clause.

In the eight-year period following independence in 1776, 11 of the 13 original states adopted new constitutions. Many of the states ended their religious establishments, but most continued to require religious oaths for civil officeholders.

Only Connecticut and Rhode Island failed to adopt new constitutions, but the constitutions of each of these two states required officeholders to be Protestants. Of the states adopting new constitutions, most simply reaffirmed the religious tests that had been in force during the colonial era. The states that allowed only Protestants to hold office were Georgia (1777), Massachusetts (1780), New Hampshire (1784), New Jersey (1776), North Carolina (1776), South Carolina (1778), and Vermont (1777).

Three states — Delaware, Maryland, and Pennsylvania (all 1776) —  required only that officeholders be Christian.

Of the new state constitutions adopted prior to the Philadelphia Convention of 1787, only the Virginia and New York constitutions declined to require religious oaths for civil servants. In New York — in the absence of a constitutional provision addressing the matter of test oaths — state legislation continued to require a test oath that prevented Roman Catholics from holding office until the turn of the century.

Neither the Articles of Confederation nor the Constitution of 1787 required religious test oaths of federal officeholders.

Nevertheless, the federal Constitution’s clause prohibiting religious tests became a model that many of the states chose to adopt.

By 1800, the states of Georgia, South Carolina, Delaware, Vermont, and Tennessee either had prohibited or removed their constitutions’ religious tests. Moreover, as a newly admitted state, Kentucky, in its 1792 constitution, opted not to require a religious test for civil officeholders. Other states retained their religious tests, however, well into the 19th and even the 20th centuries.

The Supreme Court did not rule on religious tests until 1961, when in Torcaso v. Watkins it ruled that Maryland’s constitutional requirement that every state official declare a “belief in the existence of God” was a violation of the free exercise clause of the First Amendment. The case ruled out the possibility that government at any level can impose constitutionally valid religious tests for public office.