By Geoffrey P. Hull
Other articles in Issues Related to Speech, Press, Assembly, or Petition 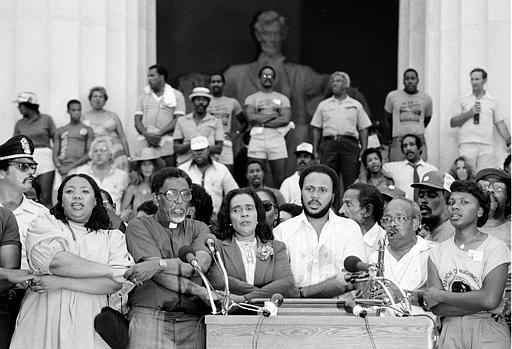 The civil rights anthem, "We Shall Overcome," was the subject of a copyright battle in which documentarians and moviemakers who wanted to use the song in films were stymied by Ludlow Music, who registered copyrights for it in 1960 and 1963. A judge ruled partially against Ludlow Music in 2017, and the parties settled in 2018, putting the song in the public domain for free use. In this photo, Coretta Scott King is flanked by her son Martin Luther King III, right, and Rev. Joseph Lowery, president of the SCLC as she sings the civil rights hymn "We Shall Overcome" following a rally on the steps of the Lincoln Memorial in Washington, D.C., on August 27, 1983. (AP Photo/Ira Schwarz, with permission from The Associated Press.)

Copyright law consists of a bundle of rights designed to protect literary and artistic works from unauthorized use.

Copyright is designed to benefit the public

Copyrighting material is designed to benefit the public by encouraging the creation and dissemination of new works of literature, music, and art for cultural enrichment and entertainment. These rights are often referred to as economic rights because they make it possible for authors of works to earn a living, thereby encouraging them to produce even more. Such rights also induce publishers and producers to invest in new works and to disseminate these works to the public.

Copyright law, as enumerated in Title 17 of the U.S. Code, cover the right to:

The initial owner of these rights is the author, usually the person who creates the work. The term author is applied broadly, regardless of whether the creator is a composer, photographer, sculptor, or creator of a literary or other artistic work. In works made for hire, the author is the employer because the work is created within the scope of employment by an employee. By written agreement, a limited number of commissioned works can also be considered work made for hire.

How long copyright lasts in the United States

Many of the framers of the First Amendment helped craft the Constitution’s Article 1, section 8, which empowers Congress “[t]o promote the progress of Science and the Useful Arts by procuring for limited Times to Authors and Inventors the exclusive Right to their respective Writings and Discoveries.”

The First Congress passed the country’s first copyright law in 1790.

The Supreme Court acknowledged the compatibility of copyright and free expression in Harper and Row v. Nation Enterprises (1985), when Justice Sandra Day O’Connor wrote, “The Framers intended copyright itself to be the engine of free expression. By establishing a marketable right to the use of one’s expression, copyright supplies the economic incentive to create and disseminate ideas.”

Tension does exist, however, between copyright and the First Amendment, as copyright owners often seek to assert their property rights and thereby limit the dissemination of information. Copyright law attempts to reduce this tension in part through fair use, a safety-valve concept codified by the Copyright Act of 1976.

It is often said that copyright bestows a “monopoly” on the copyright owner to prohibit others from reproducing, performing, or distributing an original work.

The law, however, makes clear that copyright only protects the particular expression or form of the author’s ideas, not the ideas themselves. Thus, others are free to use the same ideas, as long as they express those ideas in their own words.

For example, an individual can publish an article that comes to the same conclusion as another writer as long as the author of the article uses different language or attributes direct quotations to the original source.

As the Supreme Court remarked in Eldred v. Ashcroft (2003), “Every idea, theory, and fact in a copyrighted work becomes instantly available for public exploitation at the moment of publication.” Others may even use limited amounts of the author’s own expression through the exception of fair use. Nonetheless, freedom of expression does not mean one necessarily has a right to use others’ expression for free.

Battles over copyright are not uncommon. As an example, in 2017, a federal judge partially ruled against Ludlow Music, which had registered a copyright on the civil rights anthem, "We Shall Overcome" in 1960 and 1963. Documentarians and moviemakers wanted to use the song, a black spiritual that dated back to the turn of the 20th century, in their films. The parties settled in 2018, putting the music firmly in the public domain.

This article was originally published in 2009. Geoffrey P. Hull is a retired Professor Emeritus from Middle Tennessee State University.