By Eric P. Robinson
Other articles in Legal Terms and Concepts Related to Speech, Press, Assembly, or Petition, Freedom of the Press issues and topics 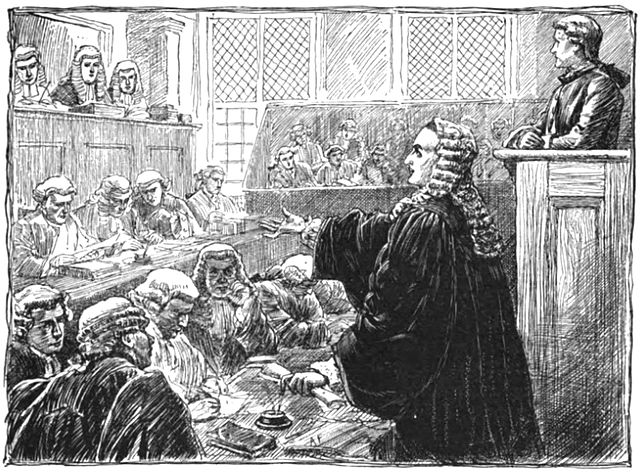 When John Peter Zenger was brought to trial on criminal libel charges for criticizing the New York colonial governor, the judge instructed the jury to ignore whether the statements in the newspaper were true or not. But the jury ignored the judge, and acquitted Zenger. It was an early case in America where truth began to be considered a viable defense to libel. (Image of the trial via Wall Street in History by Martha J. Lamb, 1883, public domain)

Although libel or defamation is now primarily a civil claim, it once was primarily a criminal offense, prosecuted by the government and punishable by imprisonment or a fine.

In the United States, courts have based decisions regarding slanderous or libelous statements on the First Amendment rights of free speech and freedom of the press.

Criminal libel is traced to the English Star Chamber

Criminal statutes punishing defamatory statements date from as early as the thirteenth century in England. Criminal libel law as applied in America can be traced directly to the English Star Chamber, which, during the time of King Henry VIII (r. 1509–1547), became a forum for prosecuting critics of the monarch.

Although the Star Chamber dealt primarily with prosecution of seditious libel against the state, it also increasingly applied the developing law of libel to defamatory statements made by one private individual about another. The rationale for this expansion was set out in De Libellis Famosis (1609): “libels, regardless of what actual damage results to the reputation of the defamed, may be penalized by the state because they tend to create breaches of the peace when the defamed or his friends undertake to revenge themselves on the defamer.”

Under English common law, conviction for libel generally required only that proof of a defamatory statement had been uttered. The truth of a statement was irrelevant. After the abolition of the Star Chamber, in 1641, common law courts took jurisdiction of criminal libel.

Libel against the government was prosecuted in early America

Seditious libel was part of the English law adopted by the American colonies and was vigorously prosecuted in pre-independence America.

The most famous case of this era was the 1735 prosecution of John Peter Zenger, a New York printer, who criticized the New York colonial governor in the New York Weekly Journal. Zenger’s lawyer, Andrew Hamilton, persuaded the jury to ignore the judge’s instruction that the truth was irrelevant.

Criminal defamation continued to be prosecuted at the state level after the colonies gained independence. Ratification of the First Amendment in 1791 had little impact since this amendment applied at the time only to actions by the national government.

In 1798, the federal government passed the Sedition Act, which imposed criminal liability on individuals who defamed the country or its officials. This law, an outgrowth of the bitter rivalry between the Federalists and the Democratic-Republicans, was signed by Federalist president John Adams to stifle his political enemies — many of whom were Democratic-Republican newspaper editors.

Although it is now conventional wisdom that the Sedition Act was unconstitutional (and James Madison so argued in his Virginia Report of 1800), courts at the time rejected such arguments. After the bitter election of 1800 ended with Democratic-Republican Thomas Jefferson assuming office as president, the Sedition Act was allowed to expire in 1801. Jefferson pardoned all those convicted under the act, and Congress refunded the fines imposed on them.

Meanwhile, state libel prosecutions continued. In 1801 the Massachusetts Supreme Judicial Court held that the Constitution did not alter the English common law of criminal libel, and in 1828 the same court rejected the argument that the right to criticize public officials should be protected.

Other courts, however, began moving away from the English common law of criminal libel.

In People v. Croswell (N.Y. 1804), the appellate court split on the argument that newspapers were entitled to publish the truth with “good motives and justifiable ends.” The New York legislature adopted this formulation of truth as a qualified defense to criminal libel in 1805 and incorporated it into the 1821 state constitution. A majority of states gradually adopted this limited-truth defense. Some states developed their own varieties of criminal libel, such as applying it to statements about groups of people, those made only to the complainant, and those about the dead.

In the 1930s, the Supreme Court justified criminal libel in a handful of cases that indirectly raised the issue.

In Near v. Minnesota (1931), the Court held that an injunction barring the publication of a newspaper that criticized local elected officials was unconstitutional and amounted to censorship. It stated, however, that “[t]he law of criminal libel rests upon that secure foundation” which was “not abolished by the protection extended in our [state and federal] constitutions.

In Cantwell v. Connecticut (1940), the Court noted that “[r]esort to epithets or personal abuse is not in any proper sense communication of information or opinion safeguarded by the Constitution, and its punishment as a criminal act would raise no question under that instrument.” In Chaplinsky v. New Hampshire (1942), the Court stated that punishment of libelous words has “never been thought to raise any constitutional problem.”

The Court’s first decision directly confronting criminal libel was Beauharnais v. Illinois (1952), in which it narrowly upheld a conviction under Illinois’s criminal group libel law. Despite the split regarding the result, all of the justices accepted that criminal libel law rested on secure constitutional foundations.

Movement against criminal libel as unconstitutional takes root in 1960s

There was also a growing sentiment against criminal libel, which led the drafters of the 1962 American Law Institute’s Model Penal Code specifically to exclude the crime of criminal defamation.

The major figure behind development of the code was Herbert Wechsler, a Columbia Law School professor, who argued in the Supreme Court on behalf of the New York Times in a landmark civil libel case, New York Times Co. v. Sullivan (1964). Although Sullivan involved civil libel, the decision also influenced criminal libel. In Sullivan, the Supreme Court held that the First Amendment requires that public officials, in order to recover damages in a civil libel trial, must show that a defendant acted with “actual malice” — that defendants either knew that an alleged defamatory statement was false or they acted with “reckless disregard” for the truth or falsity of the statement.

The result of these decisions is that criminal libel may survive only if:

These rulings, and the influence of the restatement, led several jurisdictions to repeal their criminal libel provisions. In other jurisdictions, courts struck down these provisions, either totally or as they applied to statements regarding public officials and matters of public concern.

Courts in some states, however, upheld criminal libel statutes, often by reading an actual malice requirement into the law. In Phelps v. Hamilton (1995), the Tenth Circuit Court of Appeals did this to uphold Kansas’s criminal libel law. The state later amended its statute explicitly to require actual malice.

Cases still arise under state criminal libel laws. In 2002, a jury convicted an editor and publisher of a small free monthly paper and website in Kansas of criminal defamation after they printed that a mayor and her husband, a judge, did not live in the county where they hold office. The pair appealed their fine and probation, but were turned down. In Utah, the state's Supreme Court invalidated the state criminal libel law in a 2002 case involving a 16-year-old who was arrested and charged after he published on a website that his school principal was the "town drunk" and having an affair with the secretary.

According to a report updated in September 2015 by the International Press Institute, 15 states and U.S. territories have criminal libel statutes:

Many of the statutes duplicate civil defamation – in Louisiana, Montana, New Hampshire, Oklahoma, and Wisconsin – by mentioning exposure "to public hatred, contempt or ridicule” as grounds for the offense. Oklahoma shows particular concern for the reputation of the deceased, specifically using the antiquated phrase “blacken the memory of the dead.” Michigan, Oklahoma, and Virginia explicitly prohibit questioning a woman’s chastity (though the fine is only $25 in Oklahoma). Florida, Illinois, and Michigan have provisions that forbid the libeling of banks and financial institutions (the only instance of criminal libel law in Illinois). Florida, Idaho, Illinois, Michigan, New Hampshire, North Carolina, North Dakota, Virginia, and Wisconsin list the crime as a misdemeanor. Maximum fines in these states range from $500 to $5,000 and maximum jail terms run from six months to one year.

The criminal defamation laws in 38 states and territories have either been repealed or struck down as unconstitutional.