By Shannon K. McCraw
Other articles in Laws and Proposed Laws, 1900-1950, Freedom of the Press issues and topics 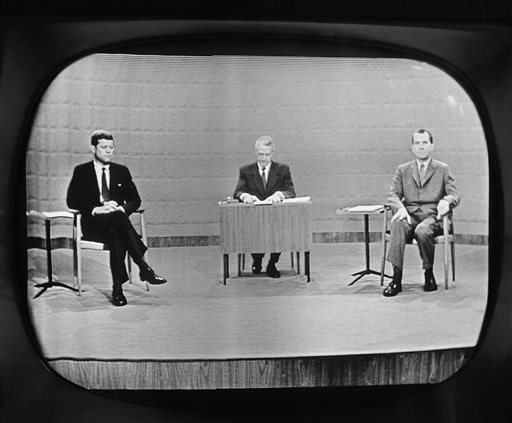 The federal equal time rule requires broadcasters to treat a candidate for the same political office identically to every other candidate for that office. If a radio or television station sells air time to one candidate, the rule states that it must offer to sell the same amount of time to other candidates for that office. In 1960 Congress had to suspend the equal opportunity law to allow the Kennedy-Nixon presidential debates to take place, shown here in 1960. (AP Photo, used with permission from the Associated Press)

Some see equal time rule as a First Amendment violation

The same stipulation applies to free air time. Although many argue that the equal time rule is a reasonable means to regulate the public airwaves and prevent broadcasters from using their media power to promote a particular candidate, others see it as a violation of the First Amendment free speech and freedom of the press rights of radio and television station owners.

The equal opportunity section (315) of the Communications Act of 1934 attempts to further First Amendment freedoms by providing that broadcast licensees must permit equal use of broadcast facilities to all legally qualified candidates for political office and that the broadcast licensee may not censor the candidates’ messages.

Often confused with the fairness doctrine — a Federal Communications Commission (FCC) policy concerned with the overall balance of broadcast programming and repealed in 1987—the equal opportunity provision remains an enforceable congressional statute. The law first emerged in the Radio Act of 1927 and was established by the Communications Act of 1934.

Central to the equal opportunity law is the belief that the free speech right of a political candidate to engage in political speech before a broadcast audience trumps the right of broadcasters to engage in private control over their broadcast facilities. Ostensibly, the law prevented broadcasters from censoring an opponent’s voice, thus ensuring more robust political debate and better serving public interests.

Equal opportunity law has been changed many times

In 1959, however, when a political candidate used the equal opportunity law to make defamatory remarks about an opposing candidate and in light of growing television news coverage of political campaigns, Congress amended the Communications Act of 1934 to include four statutory exemptions to the equal opportunity provision. Under the amendment, broadcasters are not subject to equal access obligations when a legally qualified candidate is included in a bona fide newscast, news interview, documentary, or on-the-spot coverage of a news event. This amendment sought to relieve broadcasters of the impossibility of providing free air time to every minor candidate.

In 1960 Congress had to suspend the equal opportunity law to allow the Kennedy-Nixon presidential debates to take place, because the FCC did not recognize the debates as meeting one of the four exemption categories authorized by Congress. Not until 15 years later did the FCC rule that the exemption for on-the-spot news coverage of a bona fide news event would include debates, but only when sponsored by a party unrelated to the political candidates.

In 1984 the FCC removed third-party sponsorship requirements from debate coverage. Today, the U.S. Supreme Court holds that broadcasters may exclude third-party candidates or other minor candidates from debates on the basis of content neutrality and because debates are not viewed as public forums.

In 1971 Congress amended the Communications Act by enacting the Federal Election Campaign Act. The statute held that the FCC may revoke a station’s license “for willful or repeated failure” to allow access to a station’s facilities or the opportunity to purchase reasonable amounts of time for use.

In October 1979, CBS, NBC, and ABC denied the Carter-Mondale presidential campaign’s request to purchase 30 minutes of prime time, stating that the 1980 presidential campaign was not under way. The Carter-Mondale campaign filed a complaint that eventually appeared before the Supreme Court. In a 5-4 decision in CBS, Inc. v. Federal Communications Commission (1981), the Supreme Court upheld the constitutionality of the campaign's right of “reasonable access” to the broadcast media.

In 1991 the FCC significantly altered the exemption policy by defining the “use” of a broadcast facility to include only those images and voiceovers that were authorized by a candidate or sponsored by the campaign committee. Previously, for example, if a station broadcast a film in which Ronald Reagan had starred as an actor, then the broadcast facility would have been obligated to provide the political opponent equal access.

Also, as new entertainment programming has adopted elements of news and current events discussion, the FCC has granted equal access exemptions to programs such as Today, Politically Incorrect, Access Hollywood, and the Howard Stern Show, because these programs and others offer their viewers bona fide news interviews.

Today the equal time rule is more of a formality than a real burden on broadcasters. With all the exceptions granted to the rule, it rarely limits the ability of a television or radio station to give air time to a candidate. Thus, although some claim that the rule violates the First Amendment, there has been no real effort to repeal it or to challenge it in court.

Moreover, as new forms of the media, such as the Internet, become more important, others claim that the relevancy of the equal time rule is diminishing.

As noted, the equal time rule is often confused with the now-repealed fairness doctrine. The latter, in existence from 1949 to 1987, required broadcasters airing one side of a controversial issue to provide equal time to opposing viewpoints. The fairness doctrine’s constitutionality on First Amendment grounds was upheld in Red Lion Broadcasting Co. v. Federal Communications Commission (1969).

This article was originally published in 2009. Shannon K. McCraw is a Professor at Southeastern Oklahoma State University.