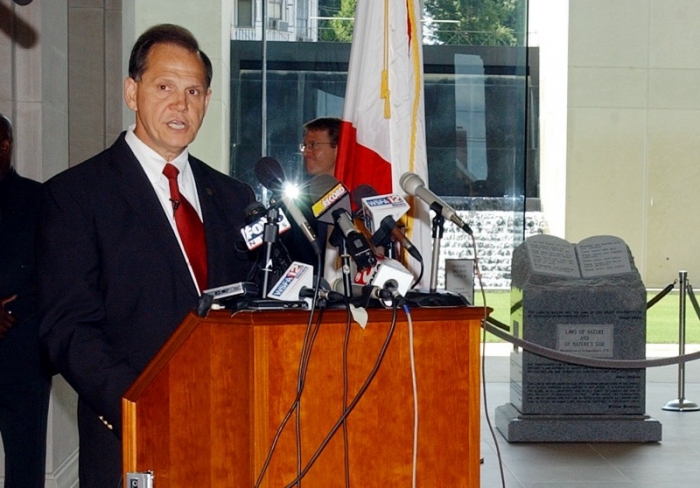 Alabama Supreme Court Chief Justice Roy Moore talks to reporters at the Alabama Judicial Building in Montgomery, Ala., July 2, 2003. At right is the Ten Commandments monument that he had commissioned at his own expense for the building and that he had been ordered to remove. (AP Photo/Jamie Martin)

One of the controversial manifestations of America’s religious heritage has been efforts to display the Ten Commandments in various public venues, including on monuments and plaques and in framed wall hangings. In recent years, legal challenges have been brought against those efforts on the basis that they violated the establishment clause of the First Amendment, which reads, “Congress shall make no law respecting an establishment of religion. . . .”

The issue of governmental sponsorship of public display of the Ten Commandments first came before the U.S. Supreme Court in Stone v. Graham (1980). A Kentucky statute mandated posting the Ten Commandments on the wall of each public school classroom in the state. The displays were to be paid for by private funds, and an inscription below each was to read: “[T]he secular application of the Ten Commandments is clearly seen in its adoption as the fundamental legal code of Western Civilization and the Common Law of the United States.”

In a per curiam (unsigned) opinion, the Supreme Court ruled 5-4 that the displays violated the establishment clause. For this the Court relied upon the first part of its three-part Lemon test, which stated, “First, the statute must have a secular legislative purpose; second, its principal or primary effect must be one that neither advances nor inhibits religion. . . ; finally, the statute must not foster an excessive government entanglement with religion” (Lemon v. Kurtzman [1971]). Kentucky’s avowed secular purpose notwithstanding, the Court said the statute violated the first prong of the test because “(t)he pre-eminent purpose for posting the Ten Commandments on schoolroom walls is plainly religious in nature.”

The Court went on to point out that the Ten Commandments are “undeniably a sacred text in the Jewish and Christian faiths” and “do not confine themselves to arguably secular matters, such as honoring one’s parents, killing or murder, adultery, stealing, false witness, and covetousness. Rather, the first part of the Commandments concerns the religious duties of believers: worshiping the Lord God alone, avoiding idolatry, not using the Lord’s name in vain, and observing the Sabbath Day.”

Among the four dissenters, then Associate Justice William H. Rehnquist agreed with the trial court finding that the Decalogue’s (Ten Commandments) posting did fulfill a secular purpose, as Kentucky claimed.

In 2001, shortly after being elected to the position of chief justice of the Alabama State Supreme Court, Roy Moore had installed in the lobby of the Judicial Building a 5,280-pound monument of the Ten Commandments, commissioned at his personal expense. Moore placed the Commandments in the courthouse without consulting his fellow justices.

Shortly thereafter, a suit was brought against the action by the American Civil Liberties Union and Americans United for Separation of Church and State. A federal district court judge ruled against the chief justice, requiring him to remove the monument, and when he refused to comply, a three-judge panel of the Eleventh U.S. Circuit Court of Appeals ordered the lower court judge to proceed with enforcement of the ruling in Glassroth v. Moore (11th Cir. 2003). The U.S. Supreme Court subsequently denied Moore’s appeal on November 3, 2003, and just 10 days later a judicial ethics panel in Alabama removed him from his seat on the state court.

Notwithstanding the earlier rulings against former chief justice Roy Moore, two counties in Kentucky posted large and readily visible copies of the Ten Commandments in their courthouses and were promptly sued by the American Civil Liberties Union. The counties then adopted almost identical resolutions that called for more extensive exhibits that would show that the Commandments were Kentucky’s “precedent legal code.” The new displays around the Decalogue featured eight smaller historical documents, including selected passages from the Declaration of Independence. The sole common element of each passage was a religious reference.

Finally, after the district court ruled against the displays, they were revised once more, without legislative sanction, to include nine framed documents of equal size, one of which was the Star-Spangled Banner, accompanied by statements about their historical and legal significance.

On June 27, 2005, the U.S. Supreme Court ruled 5-4 in McCreary County v. American Civil Liberties Union against the displays. Writing for the majority, Justice David H. Souter found that the Lemon test was applicable and dispositive. Against the counties’ claim of a secular purpose, he argued that although deference is usually accorded to a legislature’s stated reasoning for a statute, “Lemon requires the secular purpose to be genuine, not a sham, and not merely secondary to a religious objective.”

Justice Antonin Scalia, reflecting the sentiments of the three other dissenters, took issue with the majority’s claim that government must remain neutral among religions. He challenged the assertion that public-square religion must be nondenominational: “If religion in the public forum had to be entirely non-denominational, there could be no religion in the public forum at all,” he claimed.

State display of Ten Commandments among other monuments upheld

A companion case, Van Orden v. Perry (2005), also decided that day with a 5-4 ruling, presented a different set of facts that led to a different outcome. Here, the state of Texas displayed a Ten Commandments monument on the capitol grounds as one of thirty-nine monuments and historical markers spread over twenty-two acres that were meant to reflect the heritage of the Lone Star State. The monument in question had been standing for 40 years without challenge, apparently little noticed, and had been presented to the state by the Fraternal Order of Eagles of Texas, a private organization.

Chief Justice Rehnquist, writing for the majority, which ruled in favor of the state’s display, strongly emphasized the passive nature of the arrangement and observed that “While the Commandments are religious, they have an undeniable historical meaning.”

Only the vote of Justice Stephen G. Breyer distinguished the McCreary and Van Orden holdings. In switching positions on the latter case, Justice Breyer labeled the Texas display “a borderline case” and ultimately determined that Texas had used the Commandments “as part of a display that communicates not simply a religious message, but a secular message as well.” He concluded that the monument’s physical setting and the circumstances surrounding its display suggested that the state intended for the “nonreligious aspects of the tablets’ message to predominate.”

In 2009, the Court ruled in Pleasant Grove v. Summum that Utah city officials could refuse to place a monument from the religion of Summum in a public park even though they had a Ten Commandments monument already in their public park. The Court reasoned that monuments in a public park are a form of government speech immune from a free-speech challenge. It remains to be seen exactly how the government speech doctrine interacts with the establishment clause.

In the meantime, there continue to be challenges to placements of Ten Commandment monuments or plaques on government property.

This article was originally published in 2009 and updated in 2017. Kenneth F. Mott is a retired Professor of Political Science from Gettysburg College.