By Douglas E. Lee
Other articles in Legal Terms and Concepts Related to Speech, Press, Assembly, or Petition, Freedom of the Press issues and topics 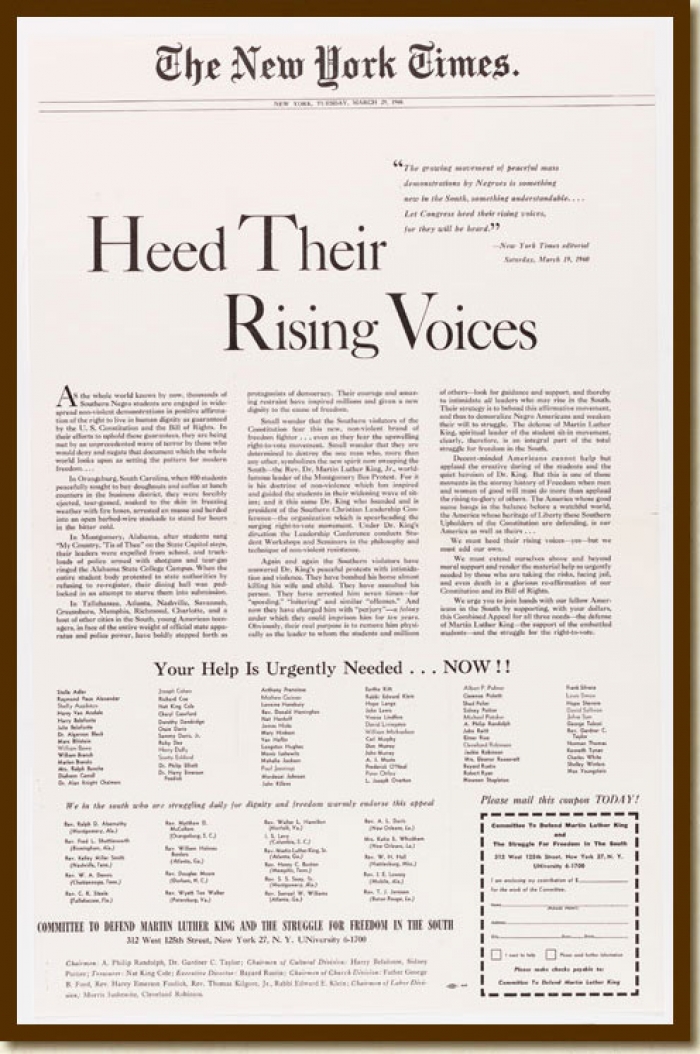 The Supreme Court first found a First Amendment problem in cases brought by public officials alleging libel in 1964. In New York Times v. Sullivan, a city commissioner of Montgomery, Alabama, sued the New York Times over a 1960 advertisement titled "Heed Their Rising Voices." The ad was meant to highlight struggles with police during the Civil Rights movement. Because the ad contained some inaccurate statements about Montgomery police, the libel claim could not be defeated by showing truth. The Supreme Court held that inaccurate statements in the ad did not negate the right to a free press and said to protect erroneous statements that are "inevitable in free debate" about public affairs, public officials must show actual malice before recovering damages. (Image of ad published March 29, 1960, public domain)

Libel, as defined in Black’s Law Dictionary, is “any publication that is injurious to the reputation of another.”

Slander, on the other hand, is the “speaking of base and defamatory words tending to prejudice another in his reputation, office, trade, business, or means of livelihood.” Thus, libel is written defamation; slander is spoken. Until the second half of the 20th century, defamation was not protected by the First Amendment.

Laws regulating libel and slander can be traced to pre-Norman times, when the church in medieval England assumed the primary role of resolving disputes over alleged damage to reputation. When libel or slander was proven, the most frequent remedy was a public apology. The church’s role continued after the Norman Conquest in 1066, when ecclesiastical courts were created to hear matters involving spiritual wrongs.

During the ensuing centuries, the jurisdiction of the church gradually gave way to that of the British judicial system, first to the Court of the Star Chamber — which primarily heard cases of seditious libel — and eventually to common law courts.

As the British common law developed, a person complaining of libel or slander needed to prove only that another person made a defamatory statement about him and that the statement injured his reputation. If the statement accused the person of a crime, of suffering from a contagious disease, or of being unfit for his work because of dishonesty or incompetence, however, injury to reputation could be presumed. The person who made the statement could escape liability if he could prove his statement was true.

These common law concepts provided the bases for libel and slander laws in the United States until well into the 20th century. While these laws varied from state to state, they generally provided that a libel or slander plaintiff needed to prove four elements to prevail:

First Amendment did not offer protection in defamation cases until 1964

Until 1964, courts included libel and slander in the types of speech that were not protected by the First Amendment.

In Chaplinsky v. New Hampshire (1942), the Court spoke of categories of speech “the prevention and punishment of which has never been thought to raise any Constitutional problem. These include the lewd and obscene, the profane, the libelous, and the insulting or ‘fighting’ words — those which by their very utterance inflict injury or tend to incite an immediate breach of the peace.”

In 1964, however, the Court in New York Times Co. v. Sullivan for the first time found a “Constitutional problem” in subjecting speech about public officials to common law defamation liability.

In Sullivan, L. B. Sullivan, the commissioner in charge of the police department of Montgomery, Alabama, sued the Times over an advertisement decrying abuses suffered by southern black students and leaders during the civil rights movement. The ad contained several factual errors, particularly in describing events involving the Montgomery police department. No one at the newspaper, however, had attempted to verify the content of the ad.

Under Alabama common law, falsity and injury to reputation were presumed. In light of the factual errors in the ad, the Times could not prove truth. The jury awarded Sullivan $500,000, a verdict later upheld by the Alabama Supreme Court.

In reversing the orders of the Alabama courts, the U.S. Supreme Court held that the common law of Alabama (and thus of all other states as well) was “constitutionally deficient for failure to provide the safeguards for freedom of speech and of the press that are required by the First and Fourteenth Amendments in a libel action brought by a public official against critics of his official conduct.”

These safeguards are necessary, the Court said, to protect and advance the “profound national commitment to the principle that debate on public issues should be uninhibited, robust,and wide-open, and that it may well include vehement, caustic, and sometimes unpleasantly sharp attacks on government and public officials.”

To protect this commitment adequately, the Court said, it is necessary to protect the erroneous statements about public officials that are “inevitable in free debate.” Otherwise, critics of public officials will self-censor their speech for fear of potentially unlimited liability.

To prevent this chilling effect on speech, the Court declared that “constitutional guarantees require . . . a federal rule that prohibits a public official from recovering damages for a defamatory falsehood relating to his official conduct unless he proves that the statement was made with actual malice,” or “with knowledge that it was false or with reckless disregard of whether it was false or not.”

The Court’s rationale was explained most clearly in a concurring opinion written by Chief Justice Earl Warren, who wrote that “[i]ncreasingly in this country, the distinctions between governmental and private sectors are blurred” and that, as a result, many persons who are not public officials are “intimately involved in the resolution of important public questions” and “often play a role in ordering society.”

The public debate about these persons, the Court held, accordingly should be as robust and wide-open as that about public officials.

The Court examined the public figure issue in detail in Gertz v. Robert Welch, Inc. (1974). In the course of holding that Elmer Gertz, a prominent Chicago attorney, was not a public figure, the Court created three categories of public figures.

The Court’s constitutionalization of libel and slander law continued in Philadelphia Newspapers, Inc. v. Hepps (1986), in which it clarified that plaintiffs must prove falsity of allegedly defamatory statements, and in Milkovich v. Lorain Journal Co. (1990), in which it held that “a statement of opinion relating to matters of public concern which does not contain a provably false factual connotation will receive full constitutional protection.”

While the burden of proof for libel and slander plaintiffs is much higher today than it was under the common law, defendants enjoy greater defenses, as well. Even if a plaintiff can prove falsity, for example, a defendant can avoid liability by proving the statement was substantially true.

State laws typically protect fair reports of meetings of public bodies and all statements made in judicial, legislative, and administrative proceedings. Defendants also occasionally can persuade a court that the plaintiff’s reputation is so poor that was is impossible to libel or slander the plaintiff any further.

The balancing of reputational and First Amendment interests, however, probably never will be fully settled.

Issues never dreamed of by the Court when it decided Sullivan — such as the rights and responsibilities of Internet publishers, bloggers, and Web sites that post comments of third persons — likely will challenge judges and legislators for some time. As the common law of libel and slander evolved for centuries, so too will the constitutional law that replaced it.