Efforts to track diversity in journalism are lagging 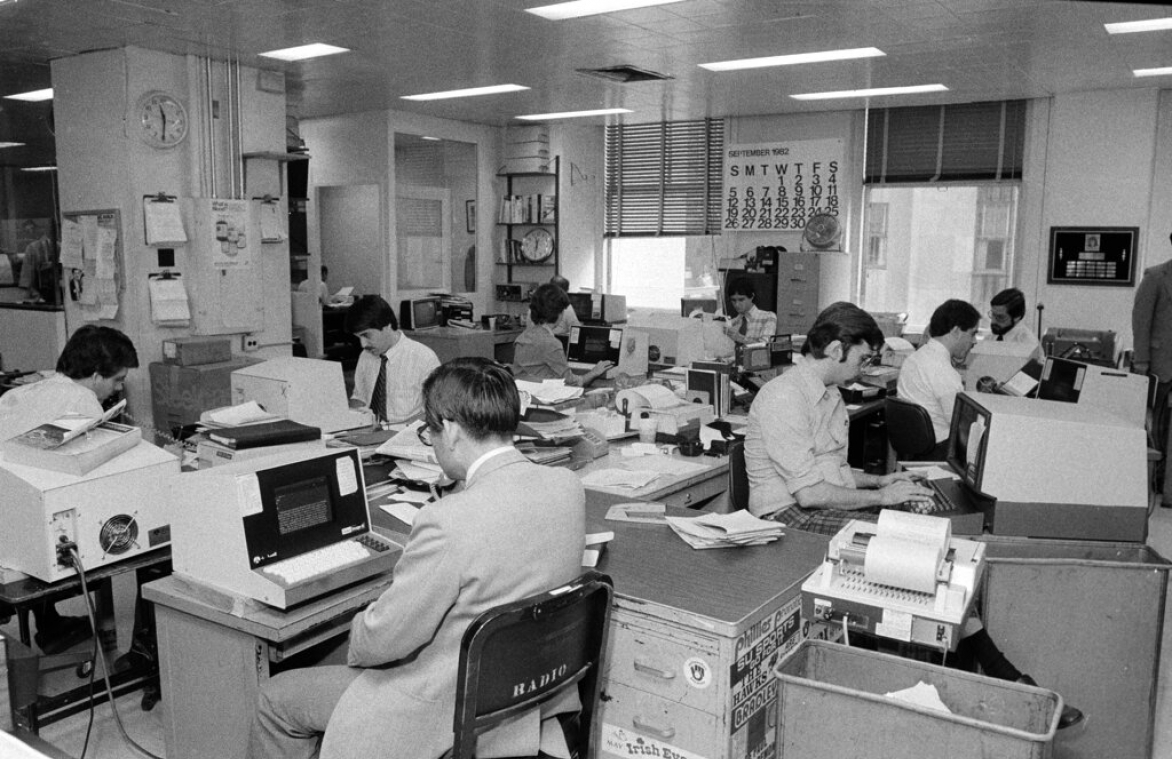 Staffers at work in the New York headquarters of The Associated Press in September 1982. Newsroom diversity has improved over time, but not enough, observers say. AP Photo/Corporate Archives/G. Paul Burnett

The News Leaders Association, a journalism trade group, extended the deadline by two months for responses to its survey about employment practices at news organizations, after expressing disappointment about how few are willing to reveal the diversity of their staffs.

The group hopes for as much participation from an estimated 5,900 newsrooms across the country as possible but has had fewer than 250 responses, said Meredith Clark, a Northeastern University professor who is running the survey.

There have been tangible signs of progress for the industry, most notably in diverse hires for some major journalism jobs: Kevin Merida, the first black executive editor of the Los Angeles Times; Kim Godwin and Rashida Jones, both black women, as presidents of ABC News and MSNBC; Katrice Hardy and Monica Richardson, the first black executive editors at the Dallas Morning News and Miami Herald; and Daisy Veerasingham, the first woman and first person of color appointed as The Associated Press' president and CEO.

Newsrooms throughout the Gannett chain, The New York Times, The Washington Post and NBC News have publicly revealed statistics on diversity hiring. There have been large-scale reckonings about past bias in reporting in newspapers like the Kansas City Star and Los Angeles Times.

Despite these steps, the overall diversity picture remains blurred.

First through a precursor, the American Society of News Editors, a newsroom-diversity survey has been conducted since the mid-1970s, following a Kerner Commission report that described the absence of black journalists as "shockingly backward." News organizations were given a goal of having staffs that reflected the demographic makeup of their communities by 2000.

"The more diversity you have in your newsroom, the better you are able to capture what is going on in your community," said Myriam Marquez, executive director of the news leaders group, which includes executives at newspapers, websites and media groups.

A lack of diversity can reveal itself in many news decisions: To many critics, the attention paid to the story of Gabby Petito, a young woman found dead after a cross-country trip with her fiance, reflected a long-time concern about journalists paying more attention to missing white women than minorities in similar situations.

Despite some improvements, the 2020 goal wasn't reached, and concerns about diversity faded amid the industry's financial collapse over the past two decades. Participation in the annual survey also became spotty, to the point where it was suspended in 2019 after only 293 responses were received.

Clark was hired to create a more thorough and modern questionnaire, and to seek ways to get more participation, since internal peer pressure was proving insufficient.

This year's effort got off to a slow start because much of the group's contact list was initially out of date. The survey asked for more information than in past years, and that proved time-consuming. Some organizations expressed concern about violations of privacy for staff members, but organizers insist that shouldn't be an issue.

"It might be in some cases that people, frankly, know if they fill it out that the current state of their news organization doesn't look like what they'd hope it would look like," said Hardy, newly-named Dallas editor and head of the NLA's diversity committee. "I always think that's a factor in any year, but especially after a year of social unrest."

Since organizations are being asked to volunteer information — as opposed to a random sample being taken — it also stands to reason that organizations making progress toward meeting diversity goals would be most likely to participate, lending doubt about whether the survey will truly reflect what is going on.

Nearly 90 of the returned surveys are from Gannett newspapers, which has been particularly aggressive in boosting diversity and last month had editors at all of its newspapers report to their readers on progress reaching goals. Gannett as a company set 2025 as a goal for their outlets to reach racial and gender parity with their communities.

As an example, the Arizona Republic said that in July, 38% of its journalists were people of color, up from 20% five years earlier. The goal is 44%. Executive Editor Greg Burton told readers how reporting and editing duties had changed to cover equity issues.

"I don't think any of us are happy with where we are," she said.

It may be a more long-term solution, but the group is considering asking foundations and others who provide funding for news organizations to require participation in the survey before getting a grant. Same thing with journalism prizes: If you want to enter the competition for a Pulitzer, show you've filled out a survey.

Clark said her goal was to have 1,500 responses to produce a statistically solid report. It seems doubtful they'll get there by the end of October, the new deadline. But George Stanley, NLA president, said there's a baseline of participants including Gannett, McClatchy newspapers, ProPublica, Buzzfeed and The Associated Press — the latter for the first time — indicating that the information will be worth releasing.

"I think these participating organizations, by proving their commitment, will gain a recruiting advantage and that will encourage others," said Stanley, editor of the Milwaukee Journal Sentinel.

The New York Times said earlier this year that the percentage of nonwhite staff members had increased from 27% in 2015 to 34% last year. At the Times, Washington Post and USA Today, a majority of the newsroom staff are women.

When he began as head of news at NBC Universal last year, Cesar Conde publicly set a goal of a staff that is 50% minority and 50% women, although he gave no deadline. Since then, monthly hires have averaged 48% people of color and 63% women, the network said. The division's percentage of minorities has increased from 27% to 30%.

Hiring minorities is important, but so is keeping them, said Doris Truong, director of training and diversity at the Poynter Institute, a journalism think tank. The news industry is seeing a generational shift among young staff members less willing to wait for attitudes to change, she said.

Hardy said retention is a real issue, and impatience about advancement isn't something unique to a younger generation.

She hopes the prominent leadership hires of the past year help usher in real change.

"It is a passion we have," she said. "It is something we have lived and breathed and discussed and wanted to have a hand in helping over the years. The buck stops with us, frankly."