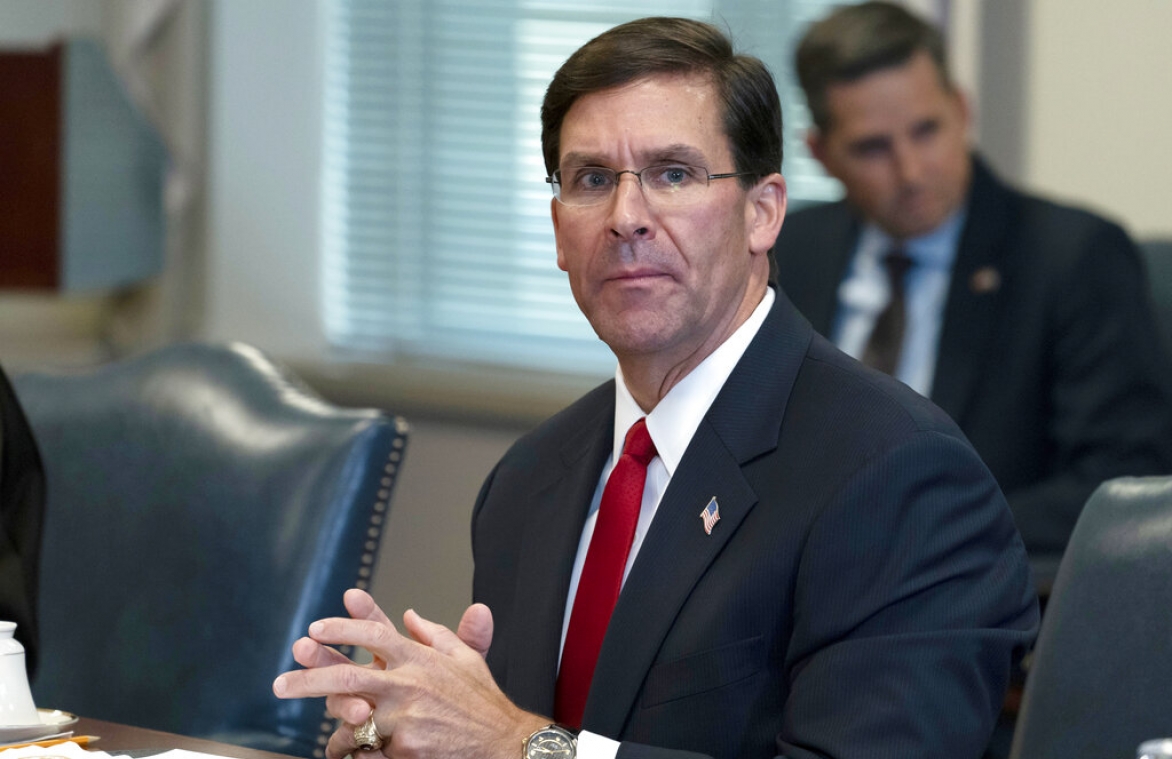 In this Sept. 22, 2020, file photo, Secretary of Defense Mark Esper speaks before a meeting with Israeli Defense Minister Benny Gantz, at the Pentagon in Washington. AP Photo/Alex Brandon

WASHINGTON (AP) — Former Defense Secretary Mark Esper claims in a lawsuit against the Defense Department that material is being improperly withheld from his use as he seeks to publish an "unvarnished and candid memoir" of his time in President Donald Trump's Cabinet.

The lawsuit, which was filed Nov. 28 in U.S. District Court in Washington, describes the memoir, A Sacred Oath, as an account of Esper's tenure as Army secretary from 2017 to 2019 and his 18 months as defense secretary, which ended when Trump fired him in a tweet just days after the president lost his reelection bid.

The period in which Esper was Pentagon chief was "an unprecedented time of civil unrest, public health crises, growing threats abroad, Pentagon transformation, and a White House seemingly bent on circumventing the Constitution," the lawsuit says.

Esper and Trump were sharply divided over the use of the military during civil unrest in June 2020 following the killing of George Floyd. Other issues led the president to believe Esper was not sufficiently loyal while Esper believed he was trying to keep the department apolitical. Firing a defense secretary after an election loss was unprecedented, but the opening allowed Trump to install loyalists in top Pentagon positions as he continued to dispute his election loss.

The lawsuit contends that "significant text" in the memoir, scheduled for publication by William Morrow in May, is being improperly held under the guise of classification and that Esper maintains it contains no classified information. The suit notes that Esper is restricted by his secrecy agreements from authorizing publication without Pentagon approval, or face possible civil and criminal liability.

The lawsuit quotes from a letter Esper sent to Defense Secretary Lloyd Austin criticizing the review process. He wrote that he had been asked not to quote Trump and others in meetings, not to describe conversations he had with Trump, and not to use certain verbs or nouns when describing historical events.

The letter describes other problematic subjects and says some 60 pages of the manuscript contained redactions at one point. Agreeing to all of those redactions would result in "a serious injustice to important moments in history that the American people need to know and understand," Esper wrote.

The suit itself says some stories Esper relates in the manuscript under consideration appeared to have been leaked to some mainstream media "possibly to undermine the impact" it would have had in his book.

Pentagon spokesman John Kirby said the department was aware of Esper's concerns. "As with all such reviews, the Department takes seriously its obligation to balance national security with an author's narrative desire. Given that this matter is now under litigation, we will refrain from commenting further," he said in a statement.

Esper, 57, a West Point graduate and Gulf War veteran, said in a statement that he had waited for six months for the review process to play out but found "my unclassified manuscript arbitrarily redacted without clearly being told why."

"I am more than disappointed the current Administration is infringing on my First Amendment constitutional rights. And it is with regret that legal recourse is the only path now available for me to tell my full story to the American people," he said.