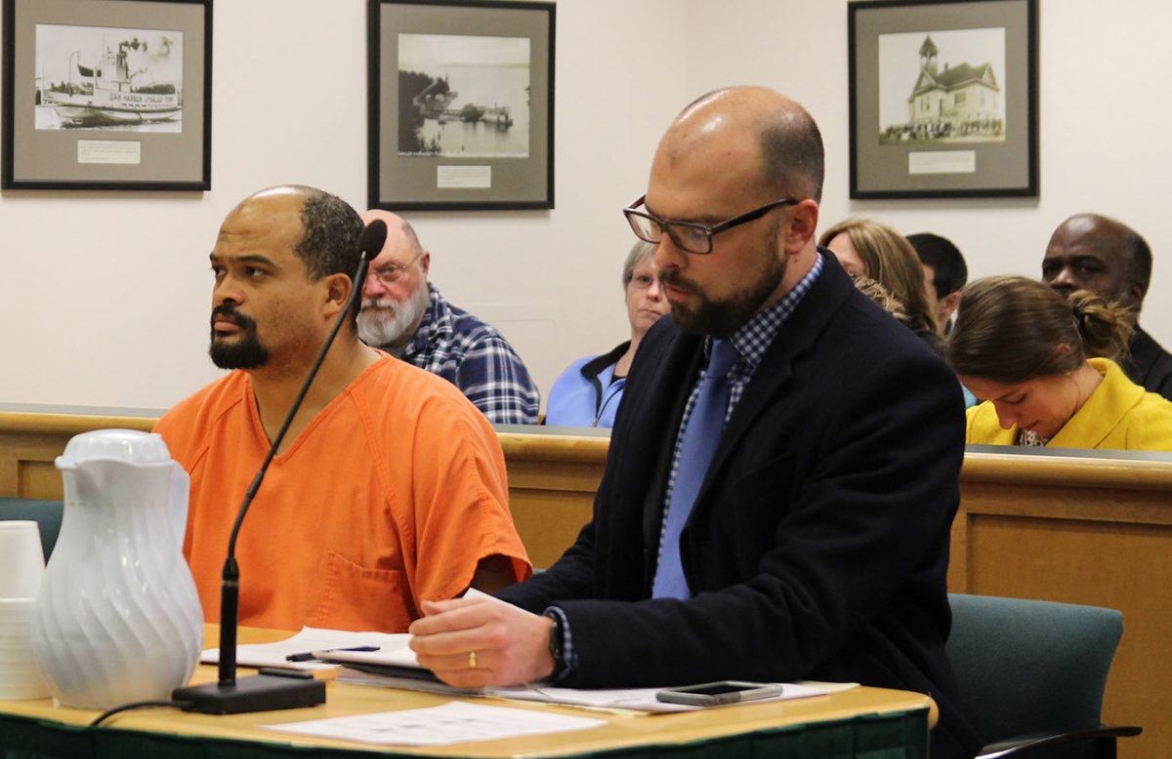 Jeremy Dawley's conviction under a law that bars intimidation of a public servant was reversed by the Washington Court of Appeals in a ruling on Dec. 30, 2019. The court said the law was overly broad in violation of the First Amendment. (In this 2017 photo, Dawley appears in Island County Superior Court with his attorney during a hearing about revoking his bail. Photo by Jesse Stensland of the Whidbey News-Times, used here with permission from the Whidbey News-Times.)

Washington’s law prohibiting the intimidation of a public servant violates the First Amendment, a state appeals court has ruled.   The appeals court reasoned that the law prohibits more than true threats and sweeps up a substantial amount of protected speech.

Jeremy Dawley, a former member of the United States Navy discharged with a traumatic brain injury, often calls up the nonemergency line in Island County and complains about issues he sees, such as illegally parked cars, traffic issues, and other problems.

Problems arose when Dawley had an unpleasant interaction with a police officer.  Dawley had called the non-emergency line over two illegally parked cars.  When the officer arrived, he asked if Dawley might carry a notebook, note all the violations, and then call to report all of them at one time.

Dawley then called the Oak Harbor Chief of Police, Kevin Dresker, and left him a voice mail complaining about his treatment by the police officers.

He stated in part: “This is Jeremy Dawley again.  I’m not getting a phone call back from you.  So do I need to look up your address and literally show up at your house cause I’m that not afraid of you, and I’m that pissed off at your police officer.”

I really think something needs to be done about this. … So, I mean, it’s completely up to you.  But if you guys aren’t willing to draw the line, like I’m gonna protect myself.  I’m not saying I’m gonna come after you guys cause that’s – I’m not a murderer, I’m a law-abiding citizen.

Dawley then filed a public records request at the Oak Harbor Police Department, asking for records on “violent offenses that resulted in physical harm and offenders to include sexual assaults.”   Chief Dresker arrested Dawley after Dawley filed the public record request.

On appeal, Dawley challenged the convictions for intimidating a public servant.   The Washington Court of Appeals reversed his convictions in its December 30, 2019, decision in State v. Dawley.

Dawley asserted that the law violated the First Amendment because it was overbroad and prohibited a lot more than just true threats.   The state appeals court agreed.

The court noted that the law did prohibit true threats but that it also “implicates protected speech because it includes threats to a person’s business, financial condition, or personal relationships.”   The appeals court recognized that the law furthered the government’s compelling interests in protect public servants from threats and ensuring a fair and independent decision-making process.

However, the appeals court ruled that the law was not narrowly drawn and “sweeps up a substantial amount of protected speech.”

The appeals court concluded that “the only constitutionally permissible limiting construction to save the intimidating a public servant statute when the jury is instructed on the definition of threat … is to limit the statute to true threats alone.”

Because the jury was not instructed that the intimidating a public servant law was limited to only true threats, the appeals court reversed his convictions.