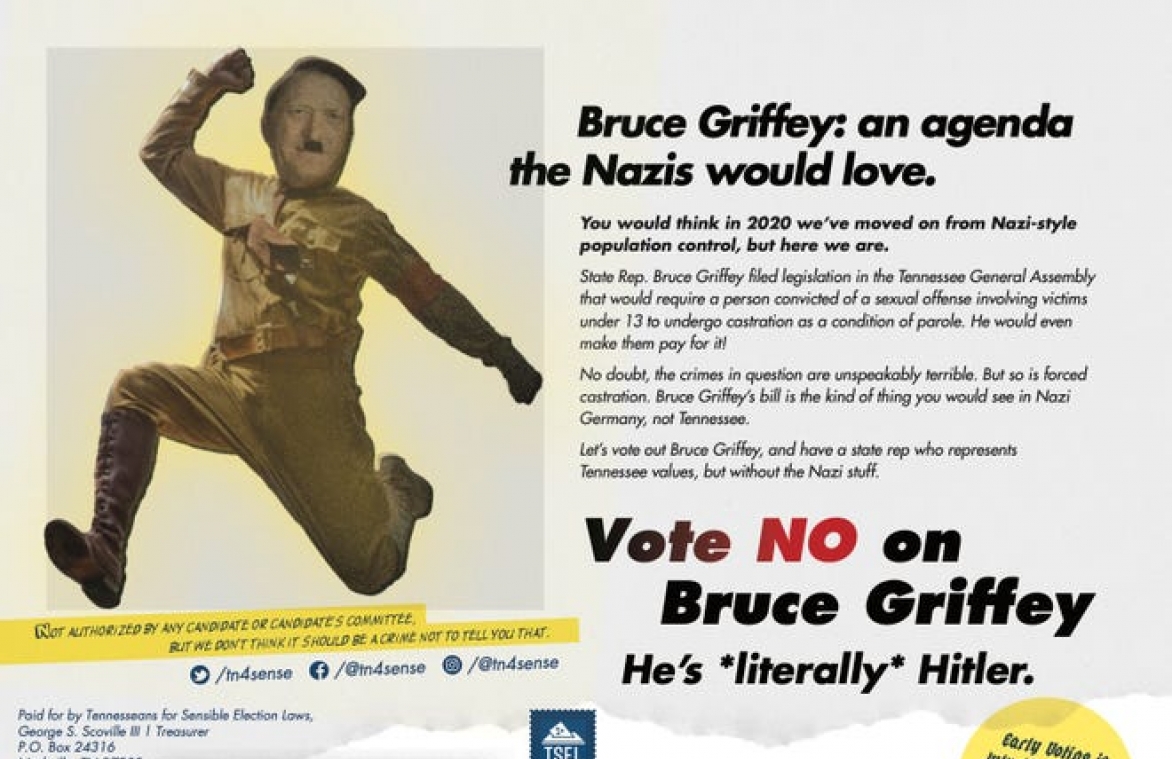 A Tennessee law that criminalizes false campaign literature against a candidate is unconstitutional, a state judge ruled last week.

Although no criminal charges had been filed against the political action committee that intended to distribute the mailer, Davidson County Chancellor Ellen Hobbs Lyle found that Tennesseans for Sensible Election Laws had shown enough history of past enforcement of the statute to represent a credible threat of enforcement.

The judge found that the law is unconstitutional because it criminalizes speech that is protected by the free-speech clause of the First Amendment — in this case, satire, parody and hyperbole, according to the ruling. The Tennessee Constitution also protects such speech.

It is a Class C misdemeanor for any person to publish or distribute or cause to be published or distributed any campaign literature in opposition to any candidate in any election if such person knows that any such statement, charge, allegation, or other matter contained therein with respect to such candidate is false.

The political action committee argued the law was unconstitutional in five ways, which the judge affirmed in granting a motion for summary judgment:

AG argued there was no likelihood of prosecution

The Tennessee Attorney General’s office had argued that the case lacked standing, ripeness and justiciability, saying the plaintiff had failed to show any likelihood or credible threat of prosecution. The Davidson County District Attorney never threatened to prosecute the political action committee and had stated that it had no intention of bringing charges against the organization “for engaging in political satire.”

Lyle said, however, that the political action committee was able to show a history of past enforcement against others, meeting the bar to establish a “credible threat” that was established by the 6th U.S. Circuit Court of Appeals in McKay v. Federspiel (2016.)

“The Court does not adopt the Defendant’s challenge that there is not a sufficient track record of enforcement of the Statute because some of these incidents are too remote in time and/or others are civil not criminal matters. The Court finds that the totality of the undisputed incidents the Plaintiff cites do satisfy its burden to demonstrate sufficient enforcement of the Statute to pose a credible threat to the Plaintiff’s exercise of the speech in issue."

After the ruling, Tennesseans for Sensible Election Laws tweeted that it would soon send out a direct-mail piece. The piece is aimed against Bruce Griffey, R-Paris, and calls him “Hitler” for proposing a law to chemically castrate sex offenders.