Skip to Main Content
Campus services and operations are open, but may be modified as a result of our COVID-19 mitigation efforts. Read our plan or view updates.

"To become truly great, one has to stand with people, not above them. We here at Eta Gamma strive to unite college men of culture, patriotism and honor in a bond of Fraternity." 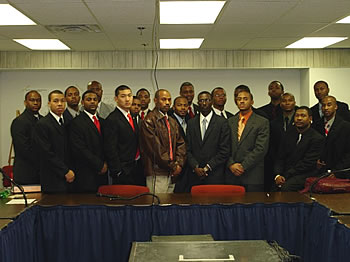 The Story of Kappa Alpha Psi is to a large extent the story of black students everywhere, whether organized or not, who attended predominantly white colleges or universities in America prior to World War II. It is also the story, though to a lesser extent, of their situation to the present day. These college and universities have sometimes been paradoxical in offering opportunity unduly bridled by restraint.

Black sponsored Greek letter organizations on the Indiana campus might well have begun in 1903, but there were too few registrants to assure continuing organization. In that year a club was formed called Alpha Kappa Nu with the purpose of strengthening the blacks' voice at the University and in the city of Bloomington. The reason for choosing the Greek letter name is not known, but it is known that the club expired within a short time. There is no record of any similar organization at Indiana until the chartering of Kappa Alpha Nu, a forerunner of Kappa Alpha Psi, in 1911.

Since 1972 Middle Tennesee State University's Eta Gamma Chapter of Kappa Alpha Psi has consisted of men striving to achieve. From world class oplympians to educational specialists. The "First Thirteen" were not only the chartered members of the chapter but, they were also the first black Greeks on the entire campus of MTSU. They crossed on December 2, 1972. The Dean of Pledges was Brother Thomas A. Wall from the Alpha Theta Chapter.