Skip to Main Content
Classes will continue through remote delivery through the Summer 2020 sessions. Many employees are working remotely; some services are modified or limited. Updates at mtsu.edu/coronavirus. 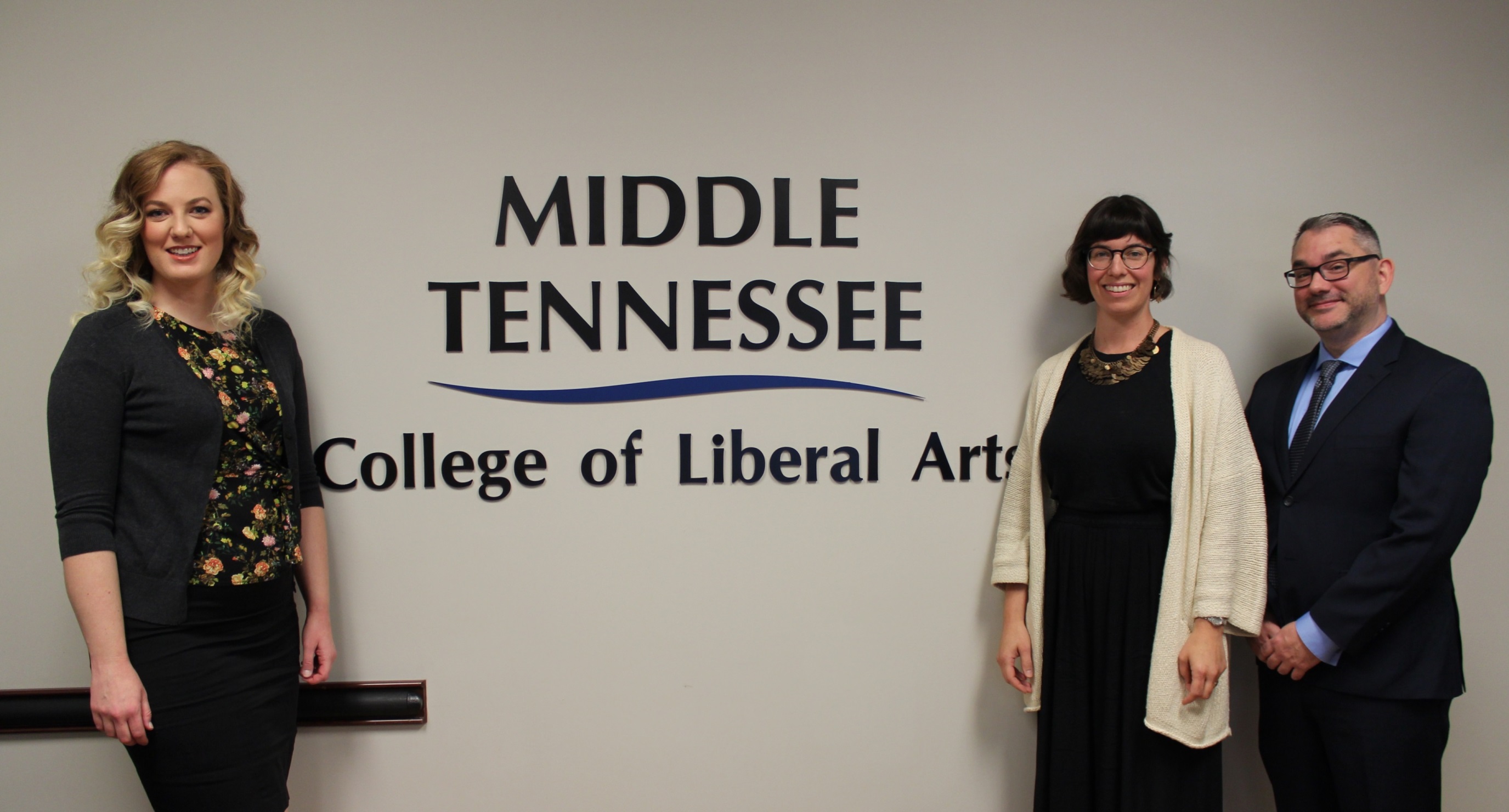 Sarah K. Chorley holds a PhD in organizational communication from the University of Colorado.  Her current research examines the communicative construction and negotiation of obsessive-compulsive disorder (OCD) and identity in the workplace in order to create a communication-based vocational rehabilitation intervention for adults in intensive OCD treatment.  Dr. Chorley frequently delivers invited lectures at hospitals and medical schools on OCD and the communicative issues adults with disabilities may face in society.  Her most recent publication, Norwegian Magic: Finding Help and Healing for Obsessive-Compulsive Disorder from an Innovative Approach, is being published later this year and explores the communicative obsessive-compulsive identity and a new, four-day intensive treatment program for OCD.  ​

Natalie Hoskins enjoys teaching subjects that help students improve their chances of leading healthy, ethical, and cooperative lives, such as Interpersonal Communication, Conflict in Communication, and Gender Communication. Hoskins completed her doctorate at the University of Kansas by exploring the lived experiences of men who had perpetrated intimate partner violence, finding that this particular population may be vulnerable to early childhood deficits in supportive communication. Hoskins will continue to examine the intersections of wellness and interpersonal communication as an Assistant Professor in the Department of Communication Studies in the College of Liberal Arts at MTSU.

Robert B. Layne II is joining MTSU from the University of Utah, where he received his PhD in Communication.  He recently completed a study examining the communication between LGBTQ patients and their providers regarding reproduction and reproductive genetic testing.  This is his last year chairing the Western Forensics and Argumentation Association, which encourages discussion and deliberation about research concerning speech, debate, and argumentation.  Dr. Layne has won multiple grants and awards for his research, including accolades from the Applied Communication Division in the National Communication Association, the Peace and Conflict Division in NCA, the Communication and Instruction Interest Group at the Western States Communication Association, the National Human Genome Research Institute, and the Office of Health Equity and Inclusion at the University of Utah. 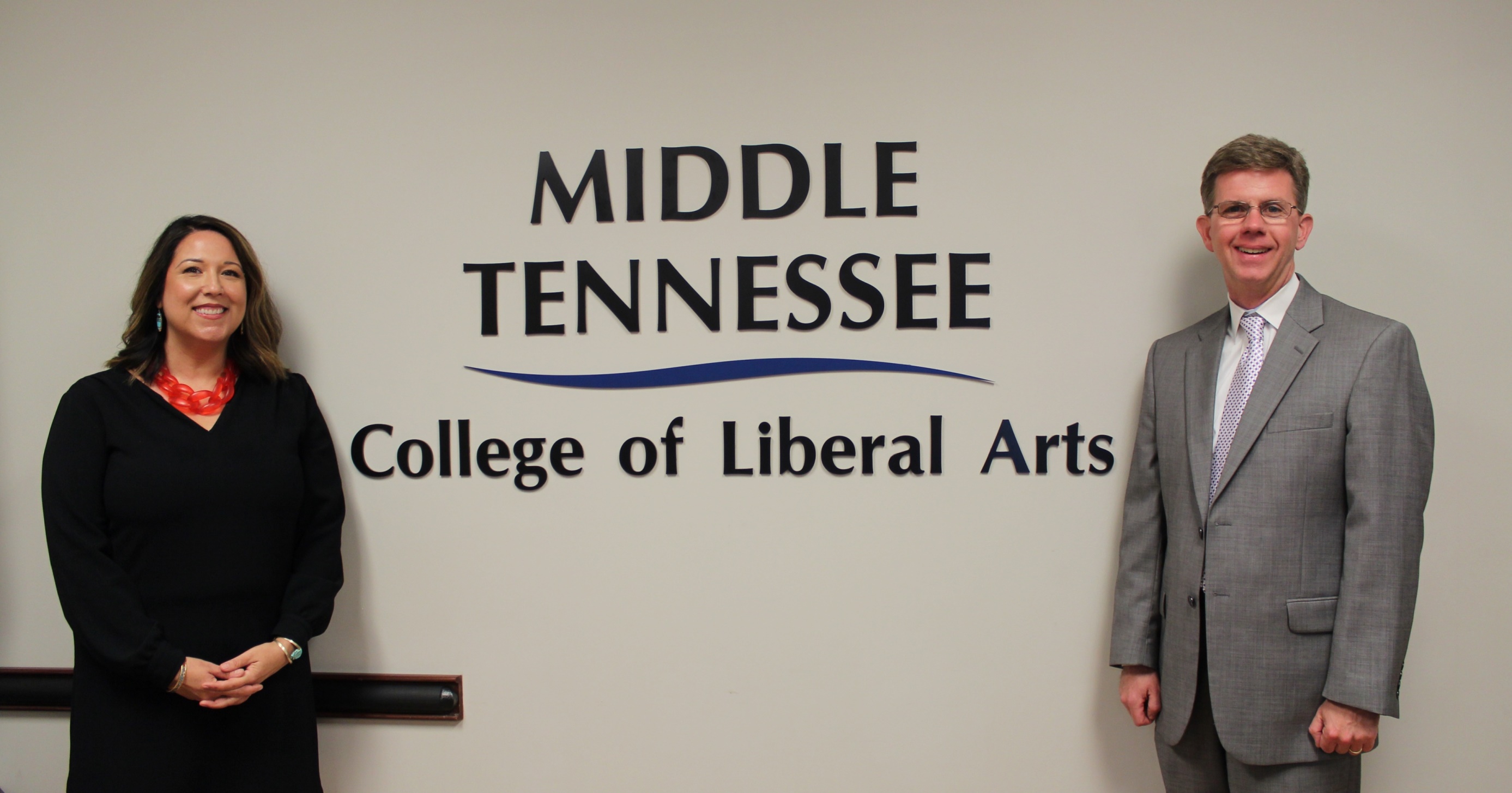 Erica Cirillo-McCarthy most recently taught writing and rhetoric courses for the Program in Writing and Rhetoric at Stanford University, where she also served as the Assistant Director of the Hume Center for Writing and Speaking. Her research and teaching interests include writing center pedagogy and praxis, feminist rhetorical theory and praxis, multimodal rhetoric, and archival research methods. Her scholarship has been published in Praxis: A Writing Center Journal, the Journal of Global Literacies, Technologies, and Emerging Pedagogies, and other edited collections. She is thrilled to join the English Department and serve MTSU students in her new role as Director of the University Writing Center.

Steve Severn comes to MTSU from West Texas A&M University in Canyon, TX, where he has taught English since 2005. For the past five years, he has served as the Department Head of English, Philosophy and Modern Languages, and prior to that assignment served as Director of the Office of Writing Programs for six years.  Steve earned his PhD in English, with a specialization in Victorian and Modern fiction, from the University of Maryland in 2004. He has published pieces on Elizabeth Gaskell, Oscar Wilde, George Gissing, Katherine Mansfield, W.H. Auden, Elizabeth Bishop and others in a variety of journals, including PMLA, Victorian Review and Victorian Institutes Journal. His current monograph-in-progress is entitled A Professional(’)s Project: The Shorter Writings of Elizabeth Gaskell. 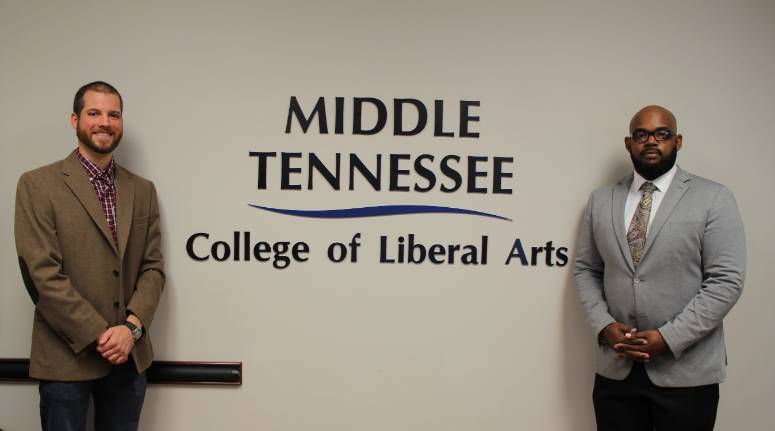 Andrew Fialka comes to MTSU from the University of Georgia, where he earned his PhD in History.  He teaches Civil War and American history. He also works at the University of Georgia's Center for Virtual History (eHistory.org) on multiple digital humanities projects. His work on guerrilla war and spatial history appears in Ohio Valley History, The Register of the Kentucky Historical Society, The Guerrilla Hunters: Irregular Conflicts During the Civil War (2017), and The Civil War Guerrilla: Unfolding the Black Flag in History, Memory, and Myth (2015).

Aaron Treadwell comes to MTSU from Howard University, where he earned his PhD in History.   His areas of expertise are Black Spirituality, with an emphasis on the African Methodist Episcopal (AME) Church, U.S. History, with an emphasis on Socio-Political activism, and African-American history.  His current research interests include violence against African Americans, the Second Amendment's support within black churches, Southern history, African-American biographies, and the theological shift of Afro-Spirituality in the 19th century.  Before coming to MTSU Treadwell taught History and Religion at Florida Agricultural and Mechanical University from 2015 to 2018. He has also taught at Howard University, Howard Divinity School, and Edward Waters College. 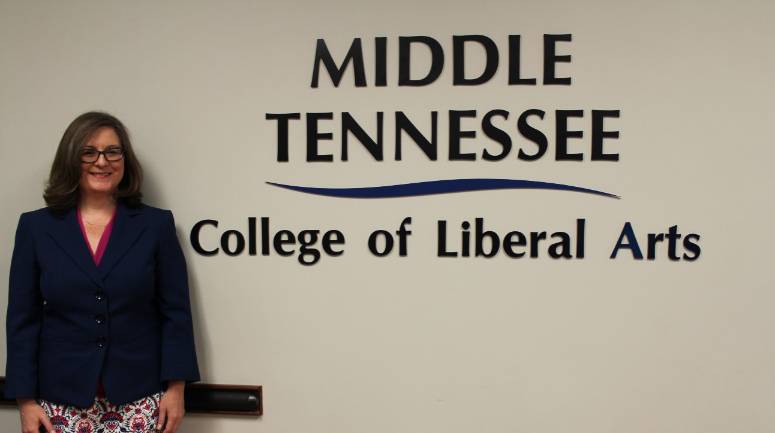 Kathryn M. Fenton holds a PhD in musicology from The University of Western Ontario.  Prior to coming to MTSU, Professor Fenton taught at Eastern Illinois University, Guelph University, The University of Western Ontario, The University of Iowa, and Wilfrid Laurier University.  She  sees music history courses as an opportunity to not only give students a sense of how individual works fit into a network of historical and cultural contexts and to expand their musical literacy, but also as a chance to encourage students to develop their critical thinking and writing skills. Her research focuses on the music of the long nineteenth century, particularly French and Italian opera. Her new book, Puccini and the American Musical Identity (Routledge, Forthcoming) explores the intersection of nationalism, cosmopolitanism, and nativism in the early New York City reception of Giacomo Puccini’s opera  La Fanciulla del West (1910). 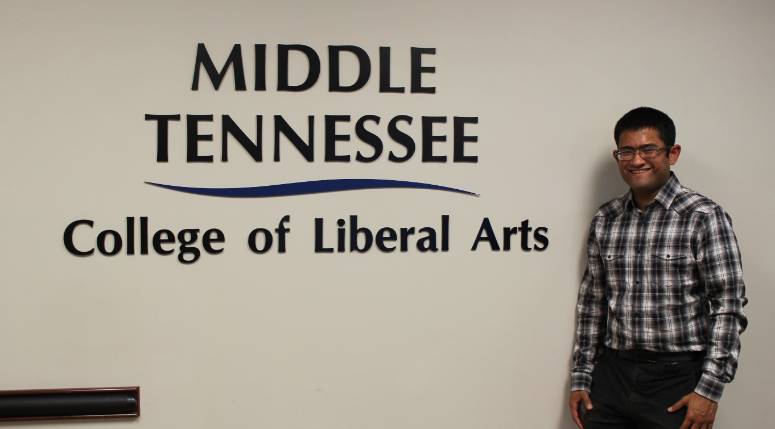 Rohit Singh is a specialist in South Asian and Tibetan religions. His current research examines the intersections of religion and modernity in the Himalayas through the lens of ritual practice and public ceremonies.  He earned his PhD in Religious Studies from the University of California, Santa Barbara and joins MTSU’s Philosophy and Religious Studies Department this year as an Assistant Professor of Religious Studies. 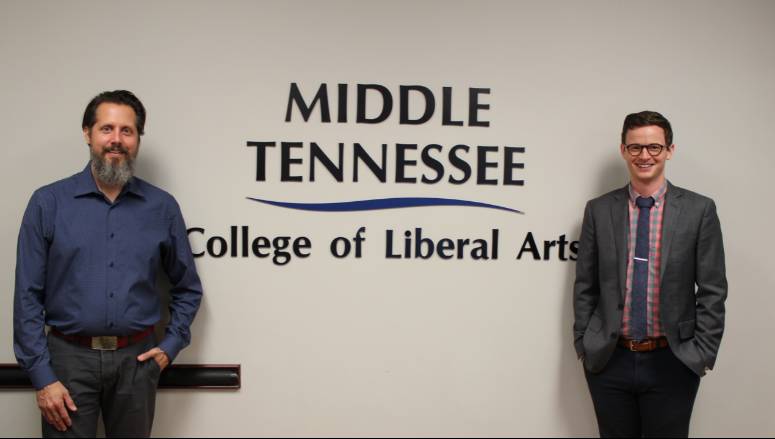 Jon DiCicco is Associate Professor of Political Science and International Relations. He teaches courses on international security, peace and conflict resolution, and related subjects, and he advises the Model UN program. DiCicco’s scholarly work on international rivalries, power shifts, and war has been published in leading peer-reviewed journals, including International Studies Quarterly, Foreign Policy Analysis, and the Journal of Conflict Resolution. He is also co-author of Presence, Prevention, and Persuasion (Lexington, 2004) and co-editor of International Relations: Introductory Readings (Kendall Hunt, 2017). Originally from New York, DiCicco earned his PhD from Rutgers University in New Brunswick, New Jersey, and taught at Rutgers, Lehigh University, and Canisius College before moving to Tennessee.

David Trowbridge is an Assistant Professor of Political Science at MTSU within the Pre-law concentration. He previously taught courses in American Politics and Public Law at the University at Albany, SUNY in upstate New York while earning his doctorate. David's current research focuses on the behavior of legal organizations working within social movements. His dissertation examined the agenda setting and tactics of organizations including NCLR and Lambda Legal, both non-profits that use litigation to create positive reform for LGBTQ people. David is also deeply invested in the training of graduate students and faculty to teach at colleges and universities. 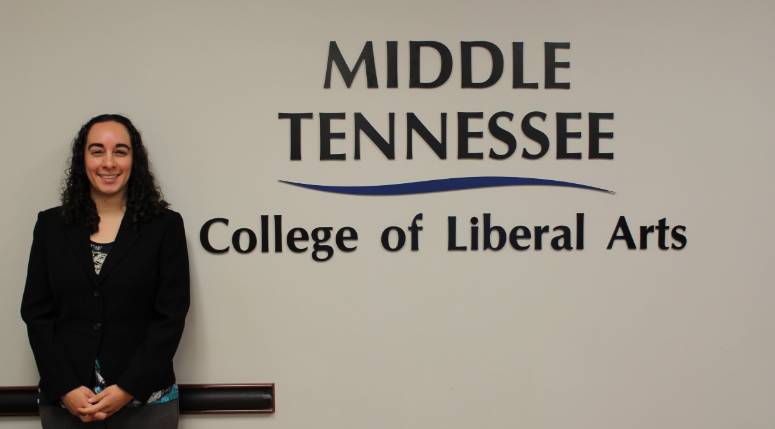 Adelle Monteblanco’s broad research interest is in inequality, at the intersection of health, gender, and the environment.  Her qualitative dissertation offered a first investigation of out-of-hospital midwives as natural disaster responders.  And most recently she trained maternal health providers along the U.S.-Mexico border to promote heat wave safety among pregnant women.  Dr. Monteblanco has taught at the college level for ten years, teaching courses such as Health and Ethics, Hazards and Disasters, Research Methods, Environmental Sociology, and Social Determinants of Health.  She earned her bachelor’s degree in Environmental Science from Regis University, a PhD in Sociology from the University of Colorado-Boulder, and recently completed an NIH-funded post-doctoral fellowship at the University of Texas at El Paso.