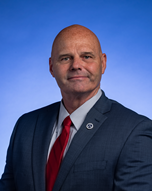 General Tommy H. Baker is the Commissioner for Tennessee’s Department of Veteran Services (TDVS). He has served as the Commissioner, TDVS, since December of 2020. As Commissioner, he manages the agency’s operations, coordinates mission execution, and oversees 104 state employees. General Baker’s mission is to passionately serve Veterans of all eras, their families, and dependents through passionate advocacy, informative outreach and ensure they have an honorable final resting place.

General Baker retired from the Tennessee National Guard, with 41 years of service, as the Deputy Commander to the Adjutant General. He was responsible for overseeing and administering over 13,000 Soldiers and Airmen in the Tennessee National Guard. In addition, General Baker was responsible for synchronizing all state and interagency entities within the military department to include state administrative services, family support programs, the State Guard, Tennessee Emergency Management Agency, and the Volunteer Challenge Academy.

General Baker started his career as an enlisted soldier, 19D Cavalry Scout in Troop B, 230th Cavalry Troop, in December 1980. After serving four years, he entered the Tennessee Military Academy and was commissioned as an Armor officer in 1985. General Baker has served as both a Cavalry Troop and Armor Company Commander. Additionally, he has served in various Maintenance and Logistics Officer Command and staff assignments within the Tennessee Army National Guard. General Baker served as the Assistant Adjutant General-Army from 2014- 2018 at Joint Force Headquarters-Tennessee in Nashville, TN. As the Assistant Adjutant General-Army, General Baker was the Army Commander charged with the oversight and administration of the training, logistics, and personnel operations for the Tennessee Army National Guard.

General Baker is a 1995 graduate of the University of Tennessee-Martin with a Bachelor of Science Degree in Public Administration. He received his Master’s in Business Administration and Military Management from Touro University in 2003. In addition, General Baker is a 2011 graduate of the United States Army War College with a Master’s in Strategic Studies in National Defense Policy. He deployed to Kuwait in 2004 as part of Operation Iraqi Freedom III, serving as the Theater Combat Service Support Automation Management Officer, and again in 2008 as the Commander of the 30th Combat Sustainment Support Battalion at Q-West, Iraq.