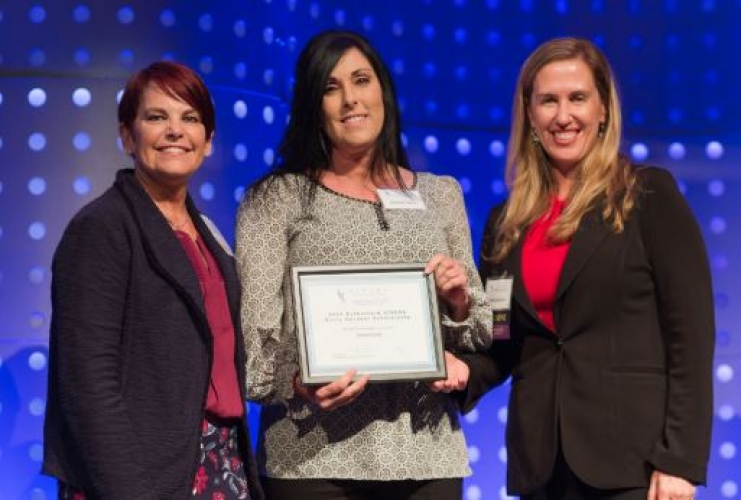 Before enrolling in classes again in 2017, Denise Harris had not stepped into a classroom since 2002.

A lot has changed in the seventeen years since those classes, where Harris was studying to become a dental hygienist. In April, because of hard work in the classroom, she was awarded one of two ATHENA scholarships and is on track to graduate from MTSU with a bachelor’s degree in Integrated Studies, a fully customizable degree perfectly suited for adult students.

Each year, ATHENA awards scholarships to women who are pursuing degrees later in life. Nominees are said to “exemplify leadership, superior performance, commitment to the community and unselfish assistance to women in their attainment of professional goals and leadership skills.”

Harris no doubt represents all those things.

She works two jobs, has three children, and is a member of the Phi Kappa Phi Honor Society. While one could say she’s making it look easy now, it hasn’t always been that way.

With some college classes already under her belt, then-23-year-old Harris went to a trade school to become a registered dental assistant. She then had two kids and realized she was not making enough to enroll both of them in daycare, so she went back to school to become a hygienist.

Then, baby number three came along and presented a whole new set of challenges for Harris. She now had three kids and one of those kids was diagnosed with Autism at an early age. So, she found another job and kept going.

Fast forward to 2017 where Harris’ boss at MTSU was pushing her to get her degree. After mulling it over and realizing many of the credits from the classes she had already taken could be transferred, she enrolled in the Integrated Studies program to earn her bachelor’s degree.

She said she really hit her stride in the Fall of 2018. She was taking an art history class and really enjoyed it, and then she received some very positive feedback from a communications professor. She said balancing her personal life as an adult and a mother and her life as a student has been a bit easier than expected.

“I was worried about taking classes during work hours, but my boss is very flexible so that helps a lot,” Harris said. “I have tried to take a few online courses, which is better for working around my schedule, but you can’t always do that.”

Remember, Harris is a member of an honor’s society, so getting good grades is a top priority for her.

“This leaves less personal time, but I’m not one to just sit around so I’m OK with it.”

There are multiple areas of emphasis within the Integrated Studies degree, and Harris went with one close to her heart. Her focus is in healthcare management.

“I want to bring awareness to Autism because my son, who is now 21 has Autism.  It has been amazing to see all of the obstacles he has overcome,” she said. I want him to be independent, but he still needs help every now and then. So, I think there should be communities for special needs adults to live on their own that allows for supervision 24/7 on site.”

Harris’ son is set to graduate soon from Tennessee College of Applied Technology in Murfreesboro after studying graphic design. He hopes to one day work for NASCAR in North Carolina.

Harris’ daughter has also inspired her throughout her journey. Diagnosed with Obsessive Compulsive Disorder at just 12-years-old and then with Attention Deficit Disorder while in college, Harris’ daughter has sometimes struggled, she said but is set to graduate from MTSU in August. Harris said she wishes there would have been someone there to give her suggestions or just tell her the best practices when trying to raise her kids.

Her children are incredibly proud of their mom for what she’s accomplished. At the ATHENA awards banquet, Harris said her daughter told her it was so “neat” to be at an event for her after Harris had gone to so many of her and her siblings' events while they were growing up.

“The Athena Award and banquet was amazing! You always hope to be a good role model for your kids,” Harris said. “She got to see really strong women come together and be acknowledged for their hard work and dedication to the Murfreesboro community.  Growing up, I never knew people did things like this so I’m glad she got to see where she can help others.”

Harris says she tells everyone she meets about going back to school at MTSU.

“I tell them about all of the things I learn and how Integrated Studies allows me to take so many different courses since I have so many different interests.  Even if I never use my degree at my age, it’s still a goal and a huge accomplishment that not everyone can say they have completed.”

If you think you may be interested in going to college for the first time or finishing a degree you already started, you can talk to an advisor and get a free evaluation by calling 615-494-7714 or by clicking here.