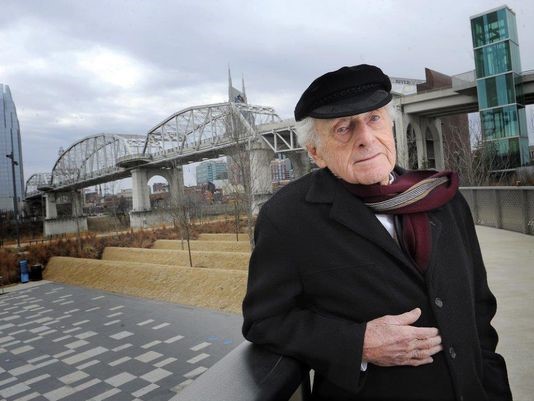 John Seigenthaler poses in front of the Seigenthaler Pedestrian Bridge, which was dedicated to him in ceremonies on April 29, 2014. As a young Tennessean reporter, the longtime Tennessean editor and publisher saved a man from leaping to his death from the bridge on Oct. 4, 1954.

John Seigenthaler (1927-2014) founded the Newseum Institute’s First Amendment Center in 1991 with the mission of creating national discussion, dialogue and debate about First Amendment rights and values.

A former president of the American Society of Newspaper Editors, Seigenthaler served for 43 years as an award-winning journalist for The Tennessean, Nashville’s morning newspaper. At his retirement he was editor, publisher and CEO. He retained the title chairman emeritus. In 1982, Seigenthaler became founding editorial director of USA Today and served in that position for a decade, retiring from both the Nashville and national newspapers in 1991. A former Nieman Fellow at Harvard University, he served for two decades as a member of the Nieman advisory board.

Seigenthaler left journalism briefly in the early 1960s to serve in the U.S. Justice Department as administrative assistant to Attorney General Robert F. Kennedy. His work in the field of civil rights led to his service as chief negotiator with the governor of Alabama during the Freedom Rides. During that crisis, while attempting to aid Freedom Riders in Montgomery, Ala., he was attacked by a mob of Klansmen and hospitalized.

Seigenthaler hosted a weekly book-review program, “A Word On Words.” A senior advisory trustee of the Freedom Forum, he was chair of the Robert F. Kennedy Book Awards for the RFK Center for Justice and Human Rights and chairman emeritus of the annual Profile in Courage Award selection committee of the John F. Kennedy Library Foundation. Seigenthaler was a member of the Constitution Project on Liberty and Security, created after the Sept. 11 tragedies, and served on the 18-member National Commission on Federal Election Reform organized in 2001 by former Presidents Carter and Ford. He was a member of the Country Music Foundation Inc. board of officers and trustees, and of the board of directors of the Howard H. Baker Jr. Center for Public Policy at the University of Tennessee at Knoxville.

In 2002, the trustees of Vanderbilt University renamed the on-campus building at 18th Avenue South and Edgehill Avenue, which had been constructed by the Freedom Forum and donated to the university, as the “John Seigenthaler Center.” The Freedom Forum foundation is the creator and principal funder of the Newseum, in Washington, D.C., the Newseum Institute and its First Amendment Center.

Scholarship projects are endowed at both Middle Tennessee State and Vanderbilt universities in Seigenthaler’s name.

Seigenthaler was the author of a biography on James K. Polk, published by Times Books and released in January 2004.

A strong advocate of First Amendment rights of free expression, he was also a nationally recognized critic of willfully false and misleading online vandalism. His controversy with Wikipedia for posting anonymous, libelous statements led to that website revising its policies.