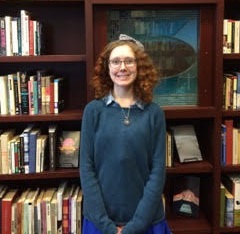 Rebecca Clippard is an alumna of Oakland High School’s International Baccalaureate Program and a recipient of the prestigious Buchanan Scholar Award with the Middle Tennessee State University (MTSU) University Honors College. Rebecca learned Japanese through attendance at the Japanese government’s Japanese Supplementary School, dual-enrollment classes in high school, and later as a Japanese major at MTSU.

Inspired to share her passion of the Japanese language and culture, Rebecca has sought out opportunities for teacher training. She has served as a teacher’s aide in the English as a Second Langauge (ESL) classroom at John Pittard Elementary School and has done a university graduate study and practicum in Dr. Shelley Thomas’ course on brain-based learning and pedagogy in the foreign language classroom.

Rebecca was awarded the prestigious Bridging Scholarship for Study Aborad in Japan, a national scholarship funded by the American Association of Teachers of Japanese.  With it, she spent the 2016-17 academic year abroad at Kansai Gaidai University in Hirakata, Japan.  On her return, she aspires to pursue a Ph.D. in Japanese language and literature and teach at the university level.