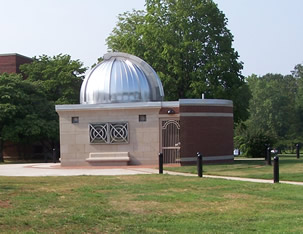 Middle Tennessee State University's observatory complex utilizes a design that includes the traditional dome-shaped structure housing the main telescope, combined with an adjacent plaza serving as a continuous-use, self-guided, hands-on, naked-eye observatory. The traditional facility houses a 16" Schmidt-Cassegrain telescope, fitted with a CCD camera that feeds the telescopic field to two 61" flat panel plasma displays mounted in the northern and eastern walls of the observatory. The image is also be 'pushed' to the Internet, and the entire operation is controllable by computer from virtually anywhere in the world.

The total concept of this project is unique, and the facility is invaluable for astronomy education and for the general public. The naked-eye structure is reminiscent of " Stonehenge " in that a series of 12 columns, uniformly spaced, circumscribe the naked-eye plaza. The columns provide observers a series of pointers that can be used to locate astronomical objects and serve the role of gnomons when tracking the apparent motion of the Sun.

Instruction sheets describing various astronomical exercises are available at the observatory and over the Internet. Interested parties can simply follow the instructions on the sheet to make their observations. We believe the observatory complex to be a popular venue for science classes of all ages, home-schoolers, scout troops, various clubs, families, and individuals as well. The complex enables elementary and secondary students to see and contrast the impact and extent of scientific progress as they move from early-science `instrument' observations to adjacent modern-science investigations. The visual contrast will be as sharp as the contrast in capabilities.

Popular objects observable through the main and supporting telescopes include:

The name given to the observatory is crafted from the ancient Greek words for sky (Urani) and dromos (a specially-prepared place) and is the first point of creative thought. The Uranidrome includes twelve columns (like the twelve Olympian gods) carefully arranged for celestial advantage around the periphery of a plaza that boasts a 32-foot (Earth's surface gravity) diameter image of the Sun, complete with sunspots. Each of the planetary objects featured in the Uranidrome is inscribed to scale, relative to the Sun, on a black granite slab mounted on the column for that object. The granite also contains descriptive features for that object. The historically accepted ideogram for each planetary object is sculpted in inverted bas-relief form on the side of the column facing away from the plaza. No ideogram existed for the new class of solar system objects called trans-Neptunium objects, so one was created for that column.

Colored-coded tiles imbedded in the side of the Jupiter column and on the plaza in front of the column enable a person of any height to find the optimum location to stand and observe Polaris (North Star), a critical point in the sky when learning about the Earth's motion. The tile color that is at a person's eye level determines the color of the plaza tile on which that person should stand in order to see Polaris through the center of the circle of the steel sculpture atop the column

The columns to the east and west are aligned with the spring and autumn equinoxes, and columns adjacent to those line up with the solstices. Each column is topped with an iron sculpture, some decorative and some for celestial functionality. The sculpture atop the Jupiter column has a circle set in the center of a set of radial lines with 15° separation. These lines are used to measure the time of passage of a given star between two contiguous radial lines in an experiment to determine the length of the day. In addition, we have included features in the concrete of the plaza that, with the shadow of the gnomon atop the Sun column, serve as a solar clock that is large enough that an entire science class can stand on.

The Uranidrome is available for use by any individuals, groups, or classes, from elementary school level through university. Contact the department about getting a guided tour of the Uranidrome.

Located at the intersection of Harding Place and Granny White Pike in Nashville, TN