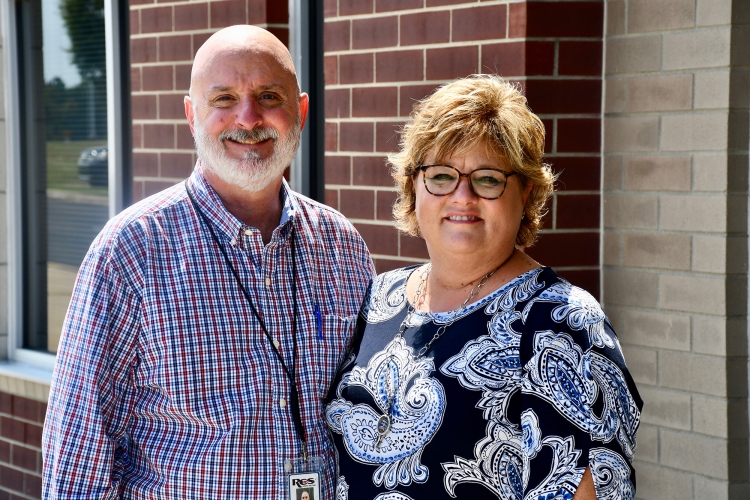 Trey Lee, a 2019 MTSU graduate with a degree in construction management, and his wife, Kim Lee

When he was 18 years old, Trey Lee had it all planned out.

He was about to graduate from high school and attend college. After attending Nashville Tech for two years, he was going to move from Smyrna, Tennessee, down to Auburn, Alabama, to get his degree in construction management.

Little did he know, that journey would end more than 30 years later by jumping into a swimming pool over the summer while still wearing his cap and gown — and his construction management degree in hand courtesy of MTSU’s flexible offerings for students of any age.

The journey was a winding one. After Nashville Tech, Lee was offered a scholarship by the company he was working for to send him to Auburn University so he could finish his degree. Then, he'd continue to work for that company for at least four years.

During his last year at Auburn he and his wife, Kim, married and had a baby. Lee had finished his thesis and lacked only nine hours of classes before he'd be ready to graduate. However, the young couple needed money and the company he was still working for informed him he could finish his degree via correspondence. That's similar to what online education is now, but in the 1980s it was all done via mail.

"I was going to eventually get those nine hours, but life took over," Lee said. "I got the majority of what I needed and was getting the on-the-job training after that, but I just never went back."

Don’t need it until you do

Lee said he didn't feel like he was "missing" anything in his career without a degree until about 18 months ago when his supervisor with Rutherford County Schools announced he was going to retire.

In order to be considered for the assistant superintendent for engineering and construction with the school board, you must have a degree. He was in line for the position, and the school board knew he was more than capable, but they wouldn't be able to hire him unless he went back and finished.

"They told me they'd work with me if I worked with them," he said. "So, they made me the interim assistant superintendent and gave me a year and a half to finish."

That was part of what sent Lee back to school, but there was a more personal motivation as well. He had also promised his wife and his mother he was going to finish that degree — and it was a promise he intended to keep.

Lee contacted Auburn and they told him he just had to re-enroll. He was optimistic he'd be able to knock out those three classes quickly. However, someone within that department recommended he take two additional classes since he'd not been to college in more than 30 years. To make matters even more complicated, those two extra classes were not offered online and he'd have to take them on the Auburn University campus.

"When that fell through, I thought, 'I wonder if MTSU has something,'" he said.

Being a Middle Tennessee native and with a full-time career in the construction field, Lee was familiar with the university's success in the concrete industry, but he was unsure how accommodating MTSU would be to someone who had not been back to school in several years.

He was also familiar with MTSU because his youngest daughter is a Blue Raider graduate and is still active with her sorority. His son-in-law has a degree from MTSU as well. Lee said his daughter offered to show him around campus and tell him where not to park if he were to ever get lost.

He met with Thomas Gormley, an assistant professor within the School of Concrete and Construction Management. Lee says Gormley told him they would do anything they had to do so he could finish up his degree on time and at MTSU.

Heather Brown, director of the School of Concrete and Construction Management, worked alongside Gormley to figure out the best path forward. Lee would need more than those nine hours, but they were going to make sure he finished on time.

"Of course you want to work with a guy like that because he was so dedicated and he knows construction," Brown said, adding that they hope he continues to support the program for many years.

"I've told everyone that I've talked to that MTSU and the people I met could have not been any nicer. They worked with me, and they got creative to make this happen,” Lee said.

Brown and Gormley even invited Lee to come speak to their classes on numerous occasions since he had so much experience. Because of his background — Lee had previously taught a carpenter's apprenticeship program in Nashville for 10 years — and his willingness to speak to classes, he was able to knock out some of the required material.

Jennifer Danylo was Lee's advisor from the beginning. Both Lee and his wife mentioned several times that without Danylo he would not have graduated in August. Danylo jokingly mentioned she'd never advised a student older than her, but she was definitely up to the task. She realized how motivated Lee was and also recognized there were some classes he could test out of.

"She helped him so much and guided him in the appropriate direction," Kim Lee said, choking up as she talked about the entire process.

"On the first day we met, (Danylo) asked me what my goal was and we stayed focused on that every time we met," her husband recalled. "She did things for me that most student she deals with probably don't ask for or need, but she was extremely supportive. I felt like all of them over there took a little extra time with me. There was never a question I asked that they were not there to answer or guide me to where I needed to go."

‘It takes some self-motivation’

"Trey couldn’t have been a more engaged student to work with," Danylo said, echoing Brown's comments. "He came by every semester for advising, stayed on top of his timeline to completion, and knocked it out of the park!"

Lee said he plans to go back later this semester and speak to some classes and hopes his interaction with the professors and the students open a door for there to be some collaboration between the county and the construction management program.

"Trey has so much to give back — to his family, to MTSU, and to Murfreesboro," Danylo said. "It’s fantastic that we will be able to keep someone like him connected to our students and program through guest lectures, internship opportunities with Rutherford County Schools, etc.  He couldn’t be a better model for what MTSU exemplifies with student success."

A self-proclaimed history buff, Lee was able to test out of two history classes, something his wife knew he could do but acknowledged he worked really hard at it. The two took a vacation down to Florida and on the plane ride down, Kim lightheartedly said she grew a little tired of looking at the back cover of the textbook since Trey's face was buried in it for the entire plane ride.

"It takes some self-motivation," Trey Lee said. "I did have that work incentive, but I also had that promise I made to my wife and mother. And some of it was 'I'm this close; I am going to finish this.'"

"It was important to him, so it was important to me," his wife said. "Our parents are aging, and we try to make it a point to go see them on the weekend. So, we'd be over there and on Sunday night I'd always tell him it was time to go home because he needed to study."

"We always told our children to finish what they started," she continued. "Whether it was a sport or a club or whatever. I knew it was important to him to show our children that he lives what he had preached to them."

Lee had to finish nearly 30 hours of classes in three semesters, and while that may not be a huge course load for a full-time student, Lee said managing his time was key. Balancing his responsibilities at home and his responsibilities with work on top of the added online schoolwork was a bit tough in the beginning, but he says he just had to commit to the process.

‘I finished what I started’

Graduation also happened to be on the same weekend as the Lees’ annual family reunion, and he did not want to pull family members away from that to attend his graduation.

Since the family would be together, the Lees decided to give Trey his own graduation ceremony in his aunt's backyard. He would do his walk at the reunion and the entire family could participate.

The receiving line was an arrangement of Lee family members who had graduated from MTSU and his diploma cover was actually his daughter's. They even played “Pomp and Circumstance” on a stereo to round things out.

"I was able to explain to all the kids at the pool what I was doing," he said. "I told them I didn't get my degree as soon as I finished high school like their parents had, and I was just now getting mine. They thought that was kind of neat."

Instead of throwing his hat in the air once it was all over, Trey jumped into the pool with the rest of his family while still wearing his cap and gown.

"I think my mother was very proud. Not only that I finished, but she was able to see the culmination of it all. And that made me proud,” he said.

"I can go back and learn, I have proved that to myself if nothing else," Trey said at the end of the conversation. "I finished what I started."

With his degree, Trey Lee is another member of his family who can call themselves True Blue.

If you're interested in going back and finishing your degree there are many people at MTSU who can help. Take the first step and visit MTSU.edu/FinishNow to get started.