What is ASA style?

“ASA” is the official writing and citation style for sociology as recognized by the American Sociological Association. It is based upon the Chicago Manual of Style (CMOS), and as such, the most recent edition (6th) ASA Style Guide sought to align the rules and writing procedures with the most recent updates in the CMOS. While ASA style is based on CMOS, there are elements unique to the needs of the sociological field.

Why do citations matter?

Whenever you refer to someone’s words or ideas, whether you are paraphrasing, summarizing, or quoting, you have a responsibility to your readers to cite your source. If you do not cite your source’s words or information, you are plagiarizing. Whether intentional or accidental, plagiarism has consequences (see MTSU’s definition of plagiarism). Understanding your citation style can go a long way toward helping you write responsibly and ethically.

What are in-text citations?

This type of citation is used when writers refer to someone else’s idea(s) through paraphrasing, summarizing, and/or quoting.

In ASA, in-text citations are formatted using the author-date system in the CMOS and include:

What about in-text citations with multiple authors or sources?

For works with two authors, list both last names and the year.

For works with three authors, list all authors’ last names and the year in the first citation, but in subsequent citations, list only the first author’s last name followed by “et al.” and the year.

For works with four or more authors, only list the last name of the first author followed by “et al.” and the year.

When referencing more than one source in a sentence, list each source in your in-text citation in alphabetical order and separate them with a semicolon (;).

What is a “References” page?

The References page lists, in alphabetical order, every source cited in-text. The purpose of the References page is to provide a roadmap to your sources so that other scholars or researchers can find them. This means that, as a writer, you need to provide as much information as you can about where to find a source.

On an ASA References page:

References (Entries will use hanging indent. See the PDF version of the ASA handout.)

Other ASA rules and guidelines: 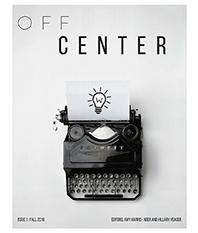 Check out the latest issue of Off Center Magazine!