Students in Political Science and International Relations may be eligible for a variety of scholarship awards that can help cover college costs. Use this link to MTSU's Scholarship Manager, a tool that helps you to identify and apply for relevant scholarships like the ones listed below.

Tennessee Board of Regent Scholarships to Intern in Washington, D.C.

Joann Arnold Memorial Scholarship
The Joann Arnold Memorial Scholarship was established in memory of Joann Arnold by the Rutherford/Cannon County Bar Association for the purpose of providing scholarship for students who intend to go to law school. To be eligible for consideration, a student must be a permanent resident of Rutherford or Cannon counties and studying law. Preference shall be given to Pre-Law students, but will not be limited to Political Science majors.

Jane Duke Memorial Scholarship Fund
The Jane Henegar Duke Memorial Scholarship was was established in memory of Jane Henegar Duke by the Rutherford County Legal Professionals for the purpose of providing scholarship for students in Political Science at MTSU. To be eligible for consideration, a student must be a permanent resident of Tennessee, a junior or senior majoring in Political Science with a minimum GPA of 2.50, and enrolled full-time. The student should also be able to demonstrate financial need as determined by the office of Financial Aid. Preference will be given to female students.

David W. Kious Scholarship
This scholarship was established in 2016 based on an endowment from the life insurance policy of Mr. David Kious. Mr. Kious received his undergraduate degree in Political Science - Pre-law from MTSU  and his law degree from the University of Tennessee. He was a founding partner of Middle Tennessee Title and Southern Title Services and a founding partner of Kious, Rodgers, Barger, Holder & Kious, PLLC, as well as Lawyers Land & Title Services, LLC. To be eligible for the scholarship, candidates must be Political Science major with a Pre-law concentration. Each scholarship is for one academic year. Prior recipients are not disqualified from consideration during subsequent years.

Norman Parks Scholarship
The Norman L. Parks Scholarship was established to honor a former chair of the Department of Political Science who taught at MTSU from 1953 to 1974. The purpose of the scholarship is to promote and encourage the study of law. The scholarship pays a portion of tuition tuition and fees for the first year of study at MTSU. Any graduating high school senior is eligible to apply. Applicants will be judged on the basis of high school scholastic record, ACT score, desire to study law, and need for financial support. The scholarship recipient must agree to attend MTSU and major in Political Science with a concentration in Pre-Law during the first semester of study.

Charles R. Ray Pre-Law Scholarship
The Charles R. Ray Pre-Law Scholarship is funded by a prominent graduate of Franklin-Simpson High School in Franklin, Kentucky. Mr. Ray completed a pre-law degree at MTSU, a law degree at Vanderbilt University, and went on to distinguish himself in legal practice in Nashville, Tennessee. The purpose of the scholarship is to promote and encourage the study of law. The student selected for the scholarship will be awarded $500.00 toward college expenses for each successful semester of full-time study (up to eight semesters) at MTSU (maintaining a 2.50 GPA) in preparation of for law school. Any graduating high school senior is eligible to apply. Preference will be given to students from Franklin-Simpson High School in Franklin, Kentucky. Applicants will be judged on the basis of high school scholastic record, ACT score, desire to study law, and need for financial support. The scholarship recipient must agree to attend MTSU and major in Political Science with a concentration in Pre-Law.

The Gene H. Sloan Scholarship was established by his daughter Dr. Anne Twining Sloan, former professor in the Department of Political Science and Internationals Relations for the purpose of providing scholarships for students in pre-law, journalism, or business law at MTSU. To be eligible for consideration for this scholarship, a student must be a junior or senior majoring in pre-law, journalism, or minoring in business law. The recipient must have a 3.2 grade point average or higher at the time the award is made.  Each scholarship is for one academic year. Prior recipients are not disqualified from consideration for this scholarship during subsequent years.

George, Cynthia, and Roxanne Vernardakis Scholarship
Awarded to an International Student whose field of study is in the Political Science Department. Preference is given to majors of Public Policy and Management and Political Science. First preference goes to a student from the Republic of Cyprus.

Drs. Clyde and Irina Willis Scholarship was established in 2015 upon the retirement of Dr. Clyde Willis from the Department of Political Science and International Relations. Dr. Willis taught in the pre-law program, served as pre-law advisor, and coached the mediation team. He passed away in 2017. To be eligible for consideration for this scholarship, candidates must meet the following criteria:

Norman L. Parks Award
The Norman L. Parks Award goes to the PreLaw major with the highest, overall GPA. Dr. Parks was the founding chair of the Department of Political Science and served in the position for about 20 years where he inspired a generation of political science and pre-law students including Charles R. Ray.

C. C. Sims Award
The C.C. Sims Award goes to the student with the highest overall GPA, other than the Parks recipient. Dr. Sims was a one-time Chair of what was then a combined History and Political Science Department. He had a Ph.D. from the University of Chicago and is credited by Dr. James M. Buchanan for inspiring him to go there for his Ph.D.

John W. Burgess Award
The John W. Burgess award goes to a student in the Political Science Department with an outstanding record in academic achievement (after the Norman Parks and C.C. Sims Awards are decided). John W. Burgess was a native Tennessean from Giles County who is considered the father of the modern discipline of political science. He left an indelible mark on the discipline, especially in regard to the need for rigor in research, writing, and teaching. He is an excellent example of the dedicated scholar, the idealist, and the humanitarian. It is appropriate, therefore, that the Tennessee Political Science Association awards this honor in his name.

Meritorious Service Award
The Meritorious Award goes to students who have been recognized as providing meritorious service to one or more of the following: Mock Trial Society, Mock Mediation, Society of International Affairs (Model UN), the department, or other student organization. This award was established by current faculty member, Dr. Mario Perez-Reilly, and former faculty member, Dr. Anne Sloan.

Current and former students publish their research in the Russian Compendium the Belgorod Dialogue - 2016. The Problems of Philology, General and National History: A Compendium of Materials of the 8th Youth Academic Forum, A.I. Papkov, editor. To see their work, click here. 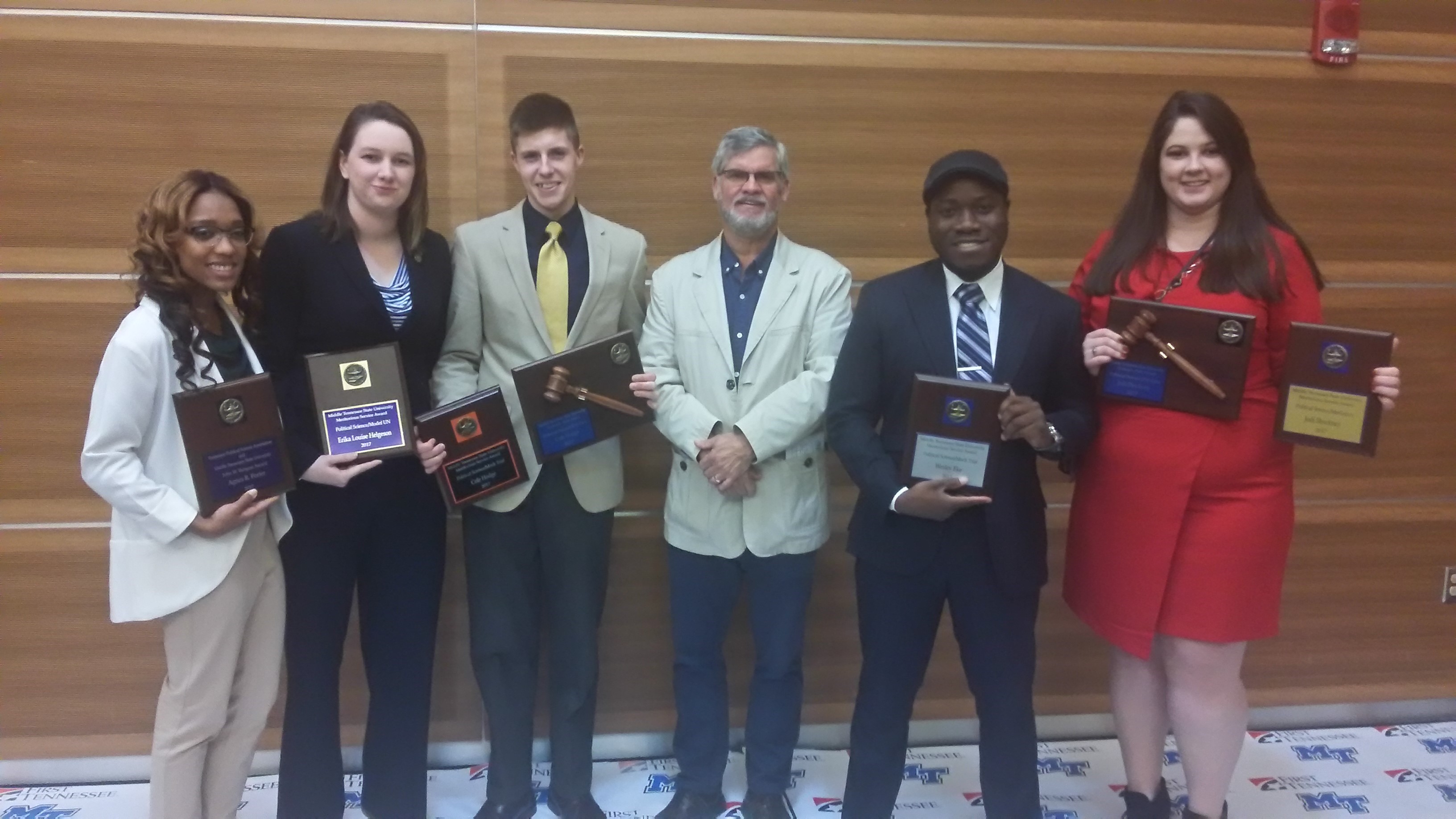 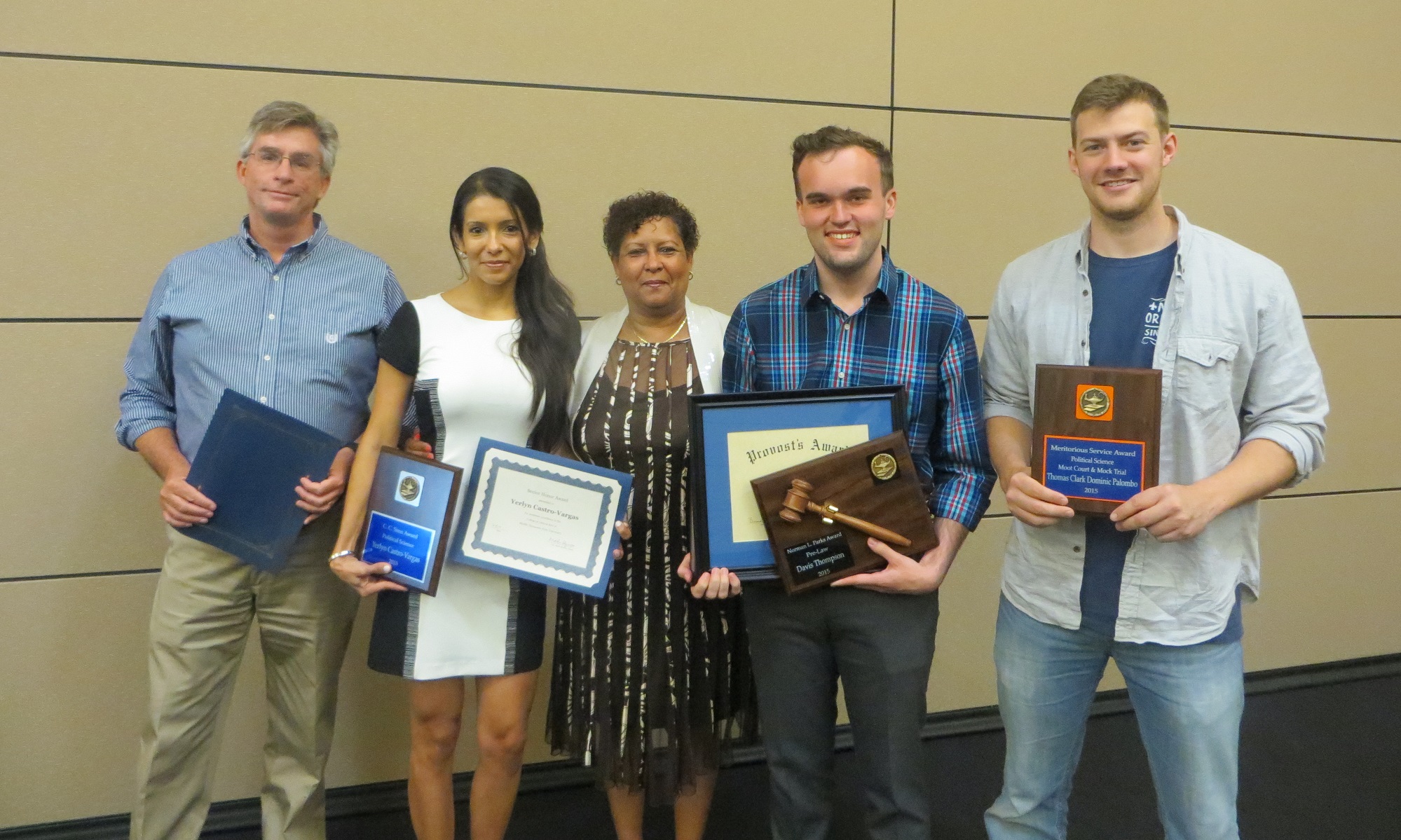 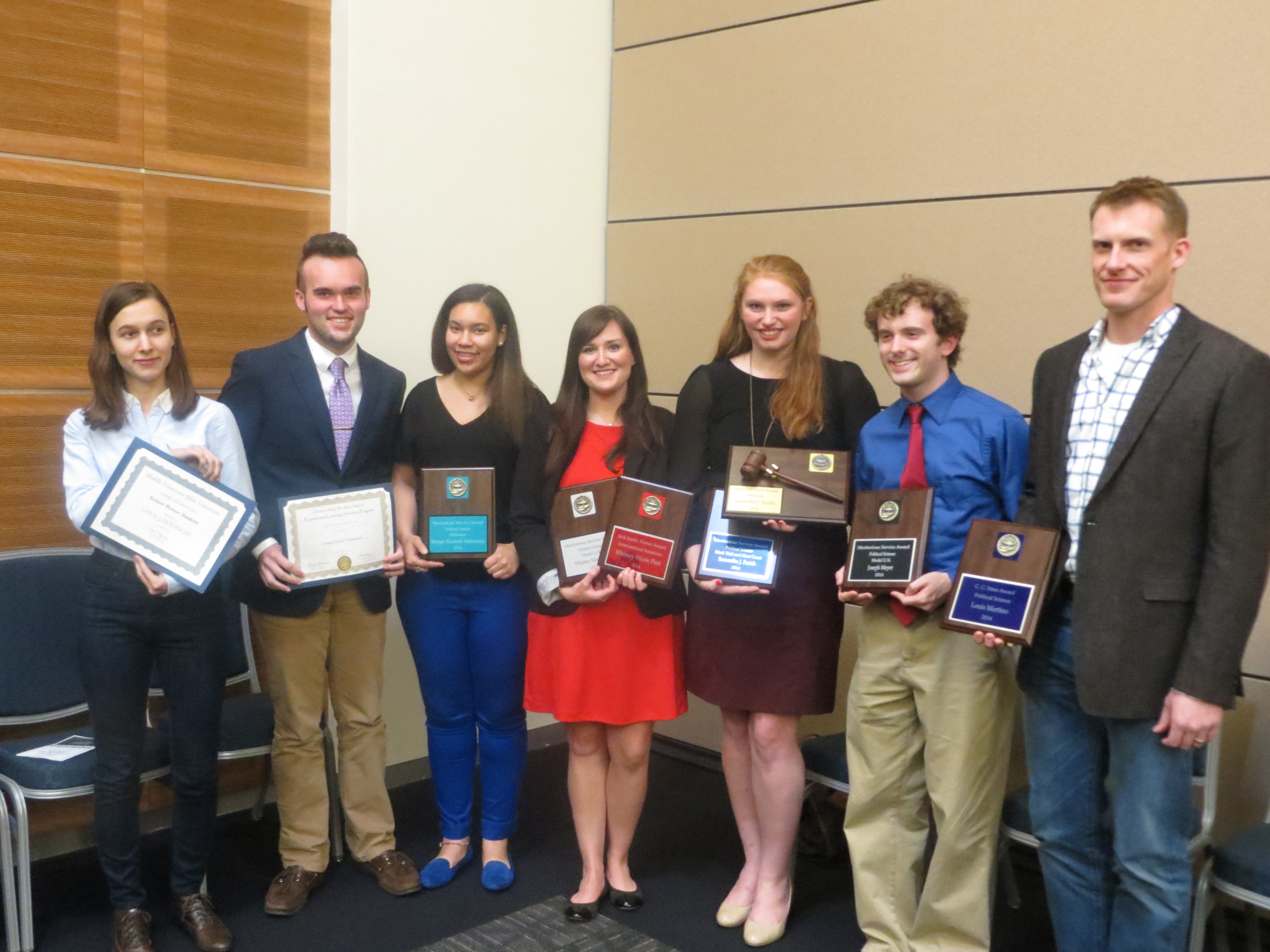 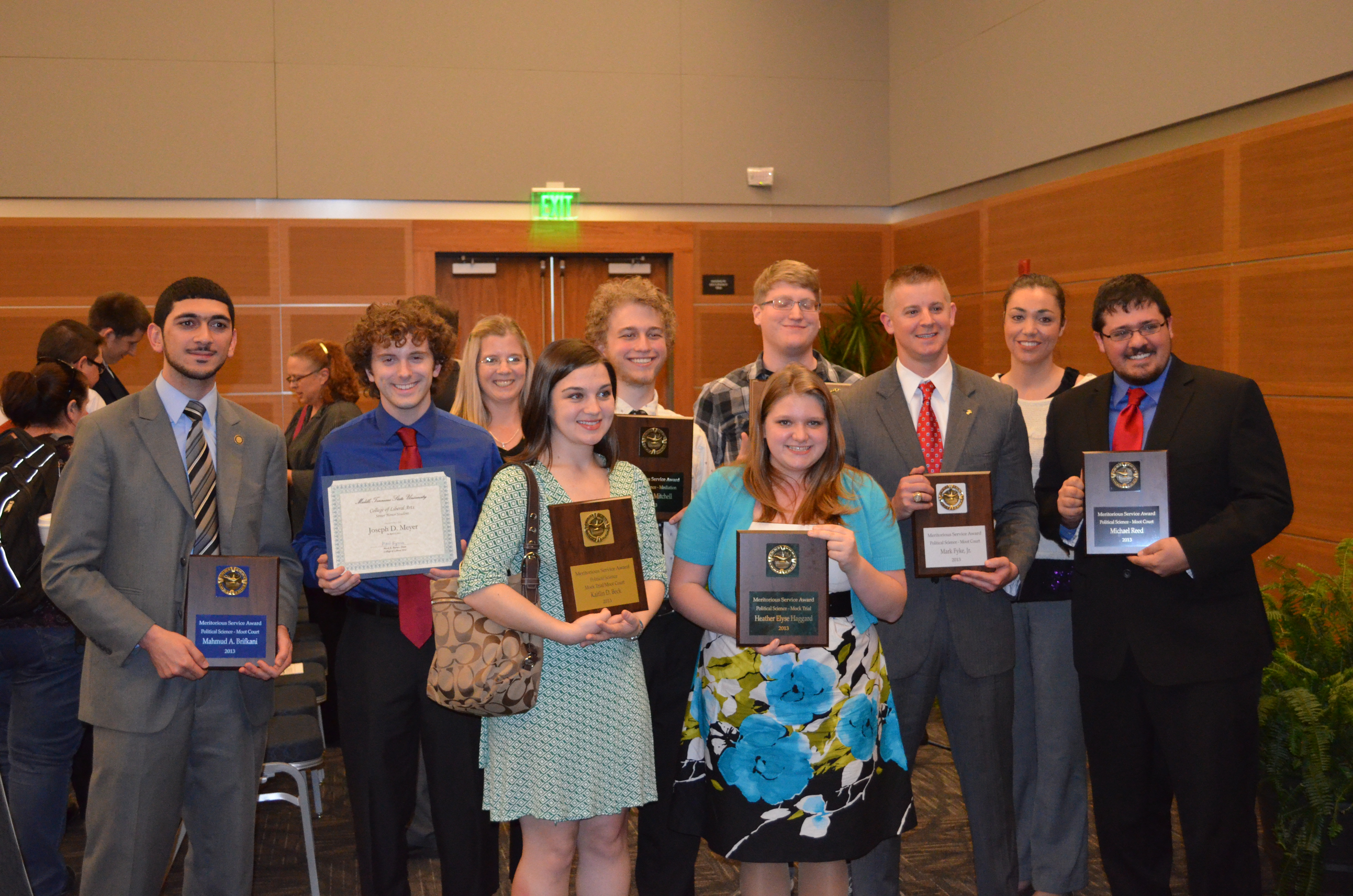 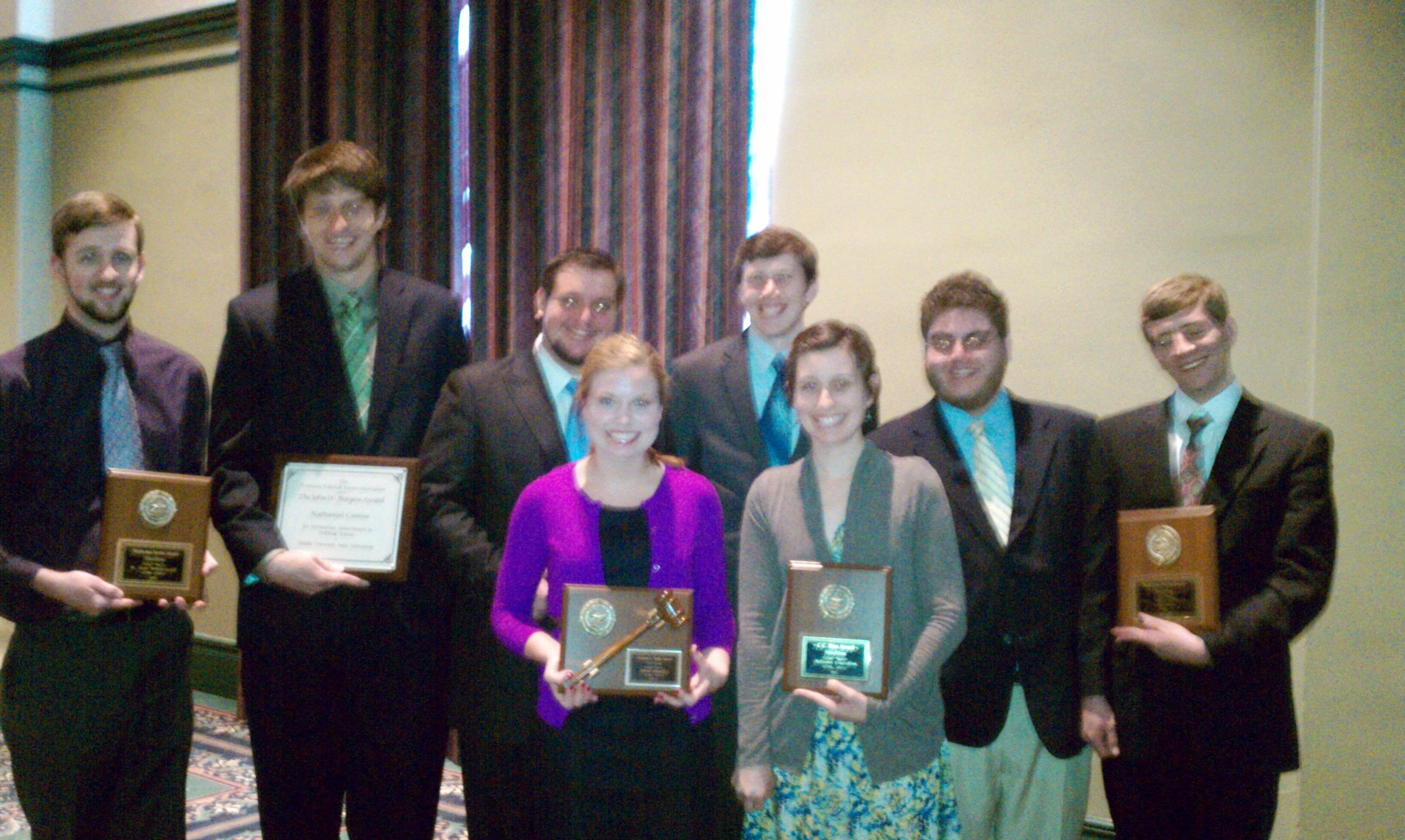 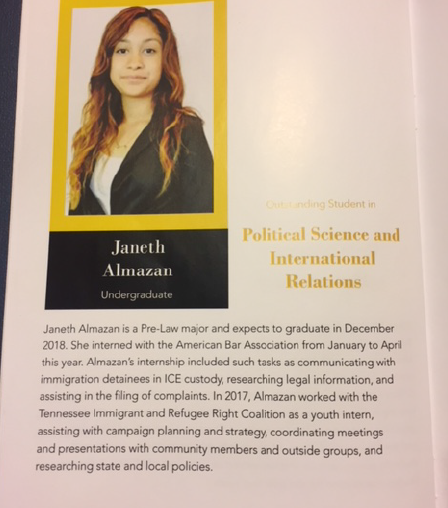 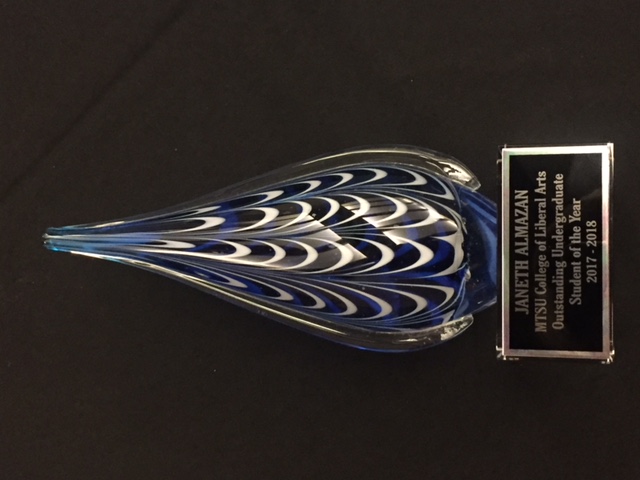 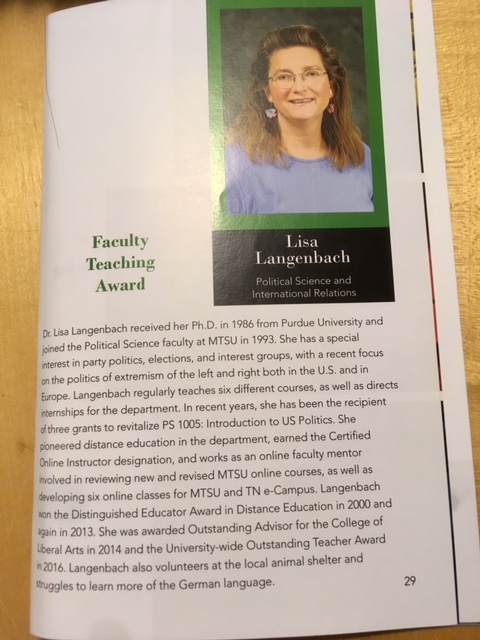 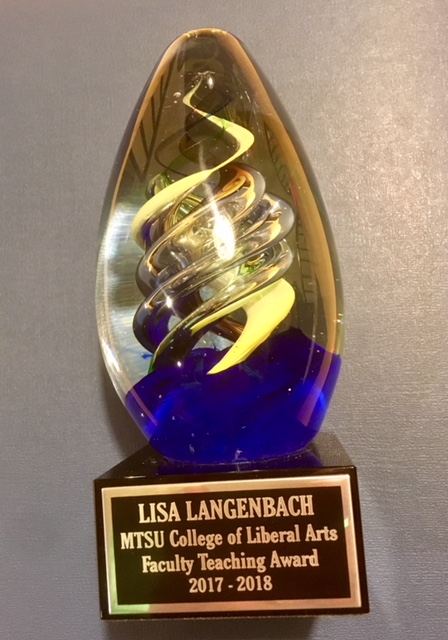 For Student Handbooks, the Virtual Mentoring Program, and Scholarships/Awards click on STUDENT RESOURCES in the navigation