During six summer field seasons to date, advanced archaeology students have had the opportunity to work with Tom Des Jean (archaeologist and cultural resource specialist with the National Park Service) for periods of six-twelve weeks conducting archaeological survey work at Big South Fork. 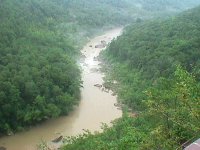 Big South Fork National River & Recreation Area includes 125,000 acres in northeast Tennessee and southeast Kentucky managed by the National Park Service. Situated on the the Upper Cumberland Plateau, the elevated sandstone of the plateau here exhibits ridge and hollow topography with elevations ranging from 775 feet in the river basin to over 1600 feet at the ridgetops. Much of the National Area is elevated tableland but eons of erosion by the Big South Fork of the Cumberland River and its tributaries have created deep gorges in the soft sandstone bedrock. This cutting action produced approximately 750 miles of high clifflines but very little terrace or bottomland. The relatively soft sandstone cliffs have also eroded horizontally at the base producing thousands of rock ledge overhangs. These features were used as rockshelter base camps by many of the prehistoric Native American cultures identified throughout the southeast. Rockshelters were also used by later historic settlers as niter mines, cattle pens, moonshine production sites, and occasionally as habitation sites. Many thousands of these types of sites are located within the boundary of the National Area -- but the locations of most remain unrecorded. In order to protect these sites from looting and to effectively manage these important cultural resources, the cooperative archaeological survey project was developed.

During the six seasons of survey (1996, 1998, 1999, 2000, 2001, and 2003), over sixty miles of cliffline have been surveyed and nearly 250 new archaeological sites recorded. Upon arrival at Big South Fork, students are provided orientation and training in field safety procedures, use of Global Positioning System equipment, NPS field recording requirements, and recognition of certain threatened and endangered plant and animal species. 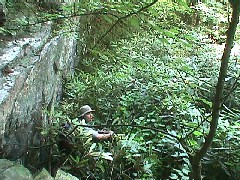 Over the course of the project, interns have averaged approximately one mile of bluffline per week -- while that might seem small, the survey locations are often miles from existing roads or even trails, requiring much of the day in entry and exit. In addition, survey conditions are extremely rigorous and exhausting - involving steep climbs on rough terrain, often through dense rhododendron thickets (and since the plants are protected, students can't use machetes to cut their way through!). Just for example, after hiking to an access point, students have often been required to crawl on hands-and-knees for thirty minutes and more through rhododendron thickets just to get to their survey location.

Student interns carefully inspect each potential rockshelter for surface artifacts, map and make a representative collection of diagnostics, use a Global Position System to fix the location, measure and draw the site, record any looting episodes, and do photographic recording.

The rockshelter sites range in size from relatively tiny overhangs... 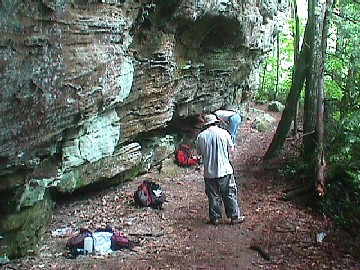 To shallow but deeper shelters providing more protection and usable space, but not currently much headroom... 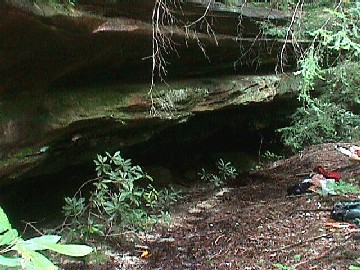 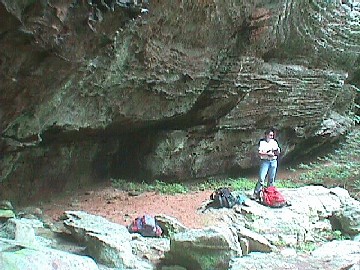 To large and sometimes even enormous rockshelters that could (and did) serve as significant base camps for larger numbers of prehistoric peoples.... 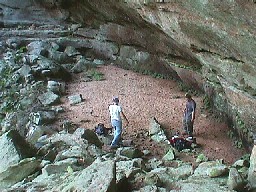 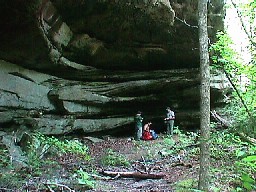 As part of the recording of these sites, students note what types of artifacts are present on the surface of the rockshelters, including non-diagnostic artifacts such as flint flakes and discarded cores. Not all artifacts are collected -- only those that provide very specific information on when people were at the rockshelter and what they were doing there. Certain types of important artifacts are mapped and then collected for analysis and curation. 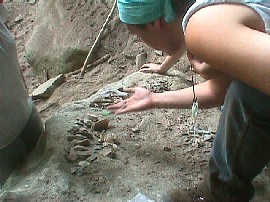 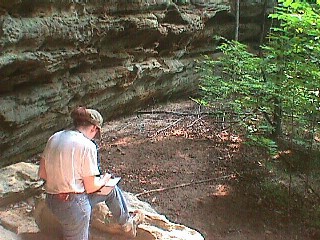 The location, size, and shape of each rockshelter site is thoroughly mapped, photographed, tagged, and recorded -- including any special features that are present that can't be removed -- but could be destroyed or damaged by careless visitors or looters. This information allows the relocation of each site by park personnel -- for monitoring and protection of significant cultural features discovered by the students. The information is also used in planning for the installation of new trails and other access points within the park.

Among the most important tasks of the student interns is identifying and recording sites that are currently being damaged intentionally by looters -- individuals seeking to enhance their personal artifact collections by digging in publicly owned sites or those simply seeking artifacts to sell on the open market. Removing artifacts from Big South Fork is a federal offense -- digging on the park without authorization can bring very hefty penalties. Over the past several years, BISO has successfully prosecuted a number of cases involving rockshelter sites. Despite those cases, some folks continue to pursue the destruction of archaeological information at these sites for their personal gain. Rockshelters showing evidence of past and present looting receive high priority for monitoring and surveillance by NPS personnel. This year (2003) alone, students found ample evidence of old and on-going looting at several rockshelters -- including many "screens" used to recover artifacts from illicit excavations.

Many new spectacular natural features such as arches, chimneys, and waterfalls are also recorded by students. While one would think that these features would already be on the books in a National Park - the enormous acreage of the park and the remote locations on the clifflines far from existing roads and trails provide an opportunity for student interns to "discover" and record many such features each year.

In 2003 alone, thirteen new natural sandstone arch formations, a natural chimney, several spectacular waterfalls, and other features were recorded by the student interns. Once again, the recording of these features adds to the information available to park personnel for planning, protection, and monitoring of not only cultural features, but also natural features of the BISO landscape. 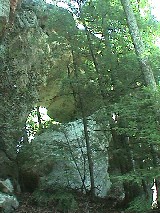 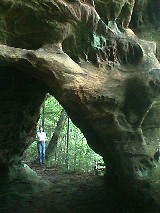 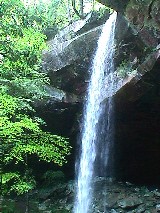 Finally, students are also trained to record infor­mation on rare, threatened, and endangered plant and animal species. The cliffline and rockshelter micro-en­vironments in the park harbor many rare plants and animals. While our primary goal in this project is recording of rockshelters used by humans in the distant and recent past -- incorporating the recording of plants and animals into the project has provided substantial new information on the locations of threatened and endangered species. 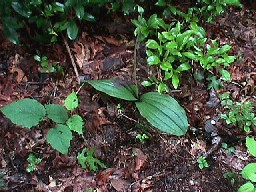 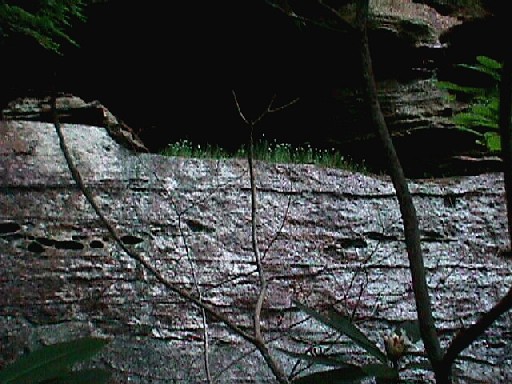 The 249 new rockshelter sites recorded by student interns cover almost 10,000 years of human occupation of the Big South Fork region. From 1996-2001, students recorded sites producing identifiable artifacts from the:
Only 700 more miles of cliffline to go!